I was surprised to find that, despite being composed 21 years ago, this was the first time that Thea Musgrave’s Phoenix Rising (a BBC commission) had been performed at the Proms. It made for a fascinating pairing with Brahm’s German Requiem in this performance by the BBC Symphony Orchestra & Chorus conducted by Richard Farnes, making his Proms debut. Phoenix Rising represents the conflict between the forces of evil and good, darkness and light. The title came during composition and is taken from a sign outside a coffee shop in Virginia. At its core, it is a double concerto for horn and timpani, set within a dramatic kaleidoscope of symphonic colour and texture. The horn player, Martin Owen, is supposed to be offstage, but at the Royal Albert Hall there is always the risk that he would never be seen again, and was therefore positioned high up on the far left of the stage, behind timpanist Antoine Bedewi, and in front of one of the four percussionists spread out across the rear stage. 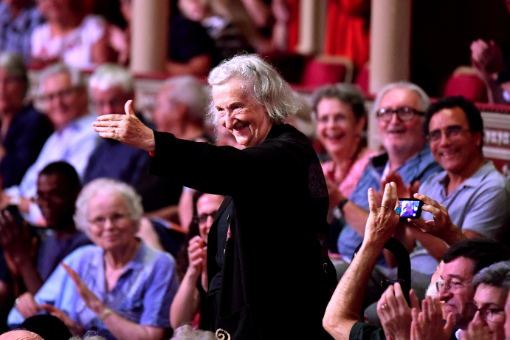