I am an organ recitalist, based in England, specializing in early music. As well as my organ performances, writing has always been an important part of my musical activities. I have written many articles on organ topics and early music, as well as the little book ‘The Performance of Early Organ Music’. For 20 years until its demise, I was the principal concert and organ CD reviewer for Early Music Review magazine, alongside freelance writing and reviewing in specialist early music and organ magazines. My reviewing is now on this review website.

As for my organ playing, this is an extract from a recent recital programme:

Andrew Benson-Wilson specializes in the performance of early organ music, ranging from 14th-century manuscripts to the late Classical period.  His playing is informed by his experience of historic organs, an understanding of period performance techniques and several internationally renowned teachers. He is the only organist to have recorded the complete organ works of Thomas Tallis. The first of his Tallis CDs (with Chapelle du Roi) was Gramophone Magazine’s Record of the Month.  The Organists’ Review noted that his “understanding of the historic English organ and its idiom is thorough, and the beautifully articulated, contoured result here is sufficient reason for hearing this disk.  He is a player of authority in this period of keyboard music“.

Amongst other reviews, one suggested that his St John’s, Smith Square recital was “one of the most rewarding organ recitals heard in London in years, an enthralling experience”. Another commented on his performance of Weckmann’s monumental Es is das Heil at St George’s, Hanover Sq that “The performance had a confident and assured touch of someone who understood the musical style. His clarity of counterpoint allied to the programme notes helped the listener to identify the processes and individual lines of the music“. Another review of an early 17th North German programme stated that “Benson-Wilson’s playing was exemplary . . . a fabulous, joyous piece, full of exuberant flourishes, its infectious nature fully conveyed by Benson-Wilson . . . a sure grasp of structure while honouring the work’s more exploratory moments.

Andrew’s concerts have ranged from the enormous 1642 Festorgel organ in Klosterneuburg Abbey in Austria to a tiny 1668 chamber organ in a medieval castle in Croatia, and include the 1723 Hildebrandt organ in Störmthal, Leipzig (where Bach gave the opening recital), the famous 1558 Ebert organ in Innsbruck’s Hofkirche and a reconstruction of the 1517 ‘swallow’s nest’ organ in Biel/Bienne, Switzerland, alongside many recitals on historic English organs.

Some examples from live performances can be heard at
http://soundcloud.com/andrew-benson-wilson.
Forthcoming UK recitals can also usually be found on organrecitals.com/abw

The covers of my Tallis CDs are pictured below. More details here and here. 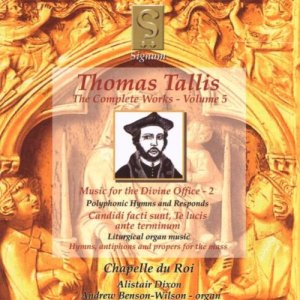