One of the most important musical innovations in recent years has been the Orgelbüchlein Project. Bach’s tiny Orgelbüchlein has the titles of 164 Lutheran chorales noted on individual pages, covering the whole of the church year. But, for reasons that are not entirely understood, he only completed 46 of them, most composed when he was organist to the Court in Weimar. The Orgelbüchlein Project was set up to commission 118 new pieces to complete the remaining chorales, the whole curated by William Whitehead. The project reached its conclusion over the weekend of 24/25 September with a complete performance of all of Bach’s Orgelbüchlein chorale preludes together with all the new commissions. The complete performance (promoted by the Royal College of Organists) took place in nine concerts in seven churches over two days with the music played by nine organists. 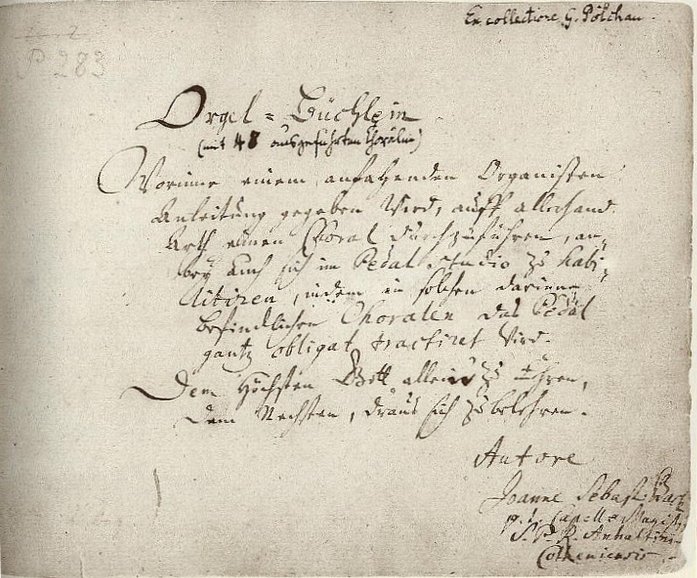 Bach’s preface states that his “Little Organ Book” was intended for a “beginning organist” to give instruction on “performing a chorale in a multitude of ways while achieving mastery in the study of the pedal”. Although his pieces generally fit a structural compositional formula, his range of musical interpretations and styles is wide. For the newly commissioned pieces, the brief was much wider, merely asking the question “If Bach were alive today, how might he go about writing a short organ chorale prelude?”, Within that brief, composers had completely free rein as to compositional style, although brevity was important. Most of the new compositions would struggle to fit on the same single small page that Bach allocated himself, although they generally managed to be reasonably brief. A “beginning organist” would understandably struggle with several of the new pieces.

The eclectic result represented the kaleidoscope of current compositional genres (on occasions, in the same piece) ranging from minimalism, post-modernism, serialism, vaguely ethereal spirituality, new complexity, jazz and pop styles and the occasional, but inevitable, French Toccata. Some of the compositions were in various versions of Bach’s own Orgelbüchlein style or from other composers such as Brahms and Durufle. Many used traditional musical forms such as canon (the repetition of a theme in different voices, usually at different pitches, forms and speeds), a genre that can easily tie music up in unpenetrable knots and weird harmonies. All of the present-day composers used the organ in a more-or-less traditional way, with no examples of the burgeoning school of composition and improvisation that treats the organ as more of a wind-blown synthesiser or uses the technical complexities of the organ as a musical device. For example, none ended with the blower being turned off.

I will resist the temptation to comment on individual pieces, not least because there were 118 of them. But among the notes I made during the recitals are comments like “too clever by half, not sure how to stop (a comment that could also apply to Bach), film music, medieval organum, pensive, overly intricate, filigree teardrop tinkles, impressionist, Arvo Pärt, clusters, bird song, pedal grunts, flamboyant”. I was rather surprised at the number of pieces that meandered through complex harmonies, only to end on the safety of a pure major chord – but there were a few ‘added 6th’ cadences. As part of the project, alongside the commissioned composers, anybody could submit their own compositions. One of them was included in the final selection, composed by a retired computer scientist.

The programming of each recital was extremely well planned, each balancing the various styles of old and new pieces. Several of them had an overall theme, including Laws and Canons, Symbols and Pictures, Trinity, Dance, Luther and a concluding Bach: A Celebration. One of the concerts in St George’s Hanover Square was in the form of ‘A Requiem in Homage to HM Queen Elizabeth II’ built around a Requiem setting that Bach may have known by Jan Dismas Zelenka, Court Composer in Dresden from 1734. It was sung by the four members of the church choir.

Kyoko Canaway’s recital at St James Garlickhythe was the official launch of Volume 3 of the intended six volumes of the complete Orgelbüchlein Project, although time restraints (St Paul’s Cathedral was obviously going to delay the start of Evensong) made it a rather less spectacular event than the private launch of Volume 4 in Westminster Abbey. That was published in 2018 and my review can be read here with more details here. Each volume is dedicated to a specific liturgical group of chorales – my review of Volume 3 will follow in due course.

Considerable praise must go to the organists, most of whom had to learn many new, and often pretty complicated pieces, some at fairly short notice. It was entirely appropriate that William Whitehead gave two of the recitals – his work in curating the Orgelbüchlein Project is an important contribution to music, as was his impressive organisation of this festival. The recitals were introduced and commented on by Zeb Soanes, probably best known as a reassuring voice of BBC Radio 4.