The Orgelbüchlein Project is one of the most exciting and ambitious musical projects of recent years. Bach’s Orgelbüchlein was intended to be a set of 164 chorale preludes covering the whole liturgical year. It was started during Bach’s time in Weimar (1708-17) with a few additions after he arrived in Leipzig. In a tiny manuscript book, Bach wrote the titles of all 164 Lutheran chorales at the top of the pages, but only managed to complete settings of 46 of them. Most titles were allocated a single page, with some given more space. When he came to write out the chorale preludes, he occasionally ran out of space and packed in a few more bars at the bottom of the pages in the more compact (but old-fashioned) German tablature letter notation. The title page of the autograph copy (pictured below) notes Bach’s intention for the collection that “a beginning organist receives given instruction on performing a chorale in a multitude of ways while achieving mastery in the study of the pedal, since the chorales contained herein the pedal is treated entirely obbligato . . . that my fellow man may hone his skill.” The Orgelbüchlein Project is an international project, founded and curated by organist William Whitehead, to complete the Orgelbüchlein by commissioning composers to write settings for the 118 missing chorale preludes. 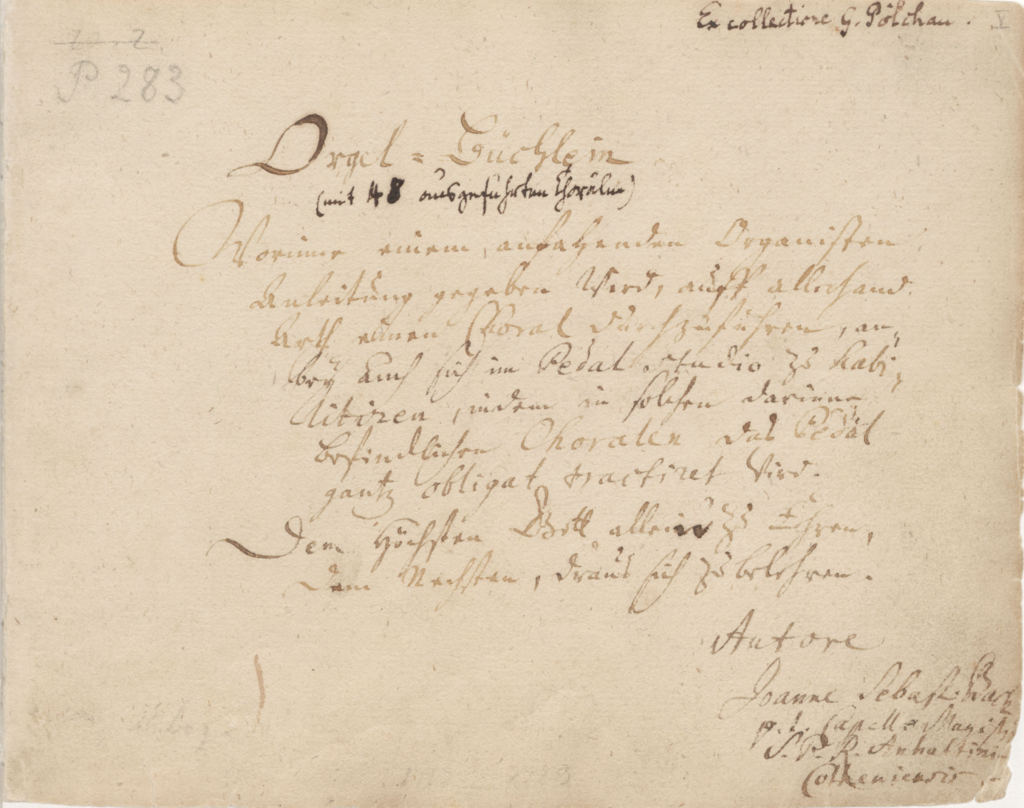 Composers contributing to the Orgelbüchlein Project were set the challenge: “if Bach were alive today, how might he go about writing a short chorale prelude in the Orgelbüchlein style?”. Of course, if Bach were composing today, who knows what particular genre of present-day compositional style he might adopt. So the project was open to many styles of composition, as long as “the new compositions, in their technical density and concentration of Affekt, reflect Bach’s originals”, implying the same small scale of the originals, presenting the chorale melody once “rather than fantasia-like repetitions, investigations and elaborations”. The ethos of the new compositions is stated as “Multum in parvo”.

It is entirely appropriate that Edition Peters has taken on the task of publishing the complete new Orgelbüchlein, including all of Bach’s original compositions as well as the 118 present-day offerings. Peters was founded in Leipzig in 1800, taking the name of Peters, a Leipzig bookseller who acquired the company on the death of the two founders, in 1813. The company had already started a complete edition of Bach’s music, then a more-or-less unknown composer. After a particularly complex 20th century history, the firm of Peter Edition has recently returned to its former home in Leipzig. The first volume of the planned set of six to be published is Volume 4, including settings of the chorales 87-113, four of which are by Bach.

The project envisaged that compositions would include an eclectic mixture of “minimalism, spirituality, new complexity, modernism, serialism, jazz, post-colonialisms, together with a range of styles from periods since Bach’s death . . . perhaps the only possible way for the Twenty-First Century to respond to Bach”. The compositions in Volume 4 certainly live up to that range of inspiration, with compositions ranging from near pastiche to one composed in the style of Maurice Duruflé, somehow written by three people. Missing, at least from these composers, is music in aleatoric style, or post-Ligeti music exploring the organ’s mechanics (such as partially drawing stops) to create sound. The 23 new compositions include contributions from well-known composers such as Sally Beamish, David Matthews, Nico Muhly, Roxanna Panufnik, and Robert Saxton, alongside people better known as performers, such as John Butt, Simon Johnson, Nigel Allcoat and William Whitehead himself. One of several interesting contributions comes from the distinguished pianist, Stephen Hough. Birth dates of composers included in this volume range from 1939 to 1995. All but one of the composers are European, stretching from Lithuania and Hungary to Spain. Unfortunately, there are only three female composers represented in this volume.

Some of the pieces are almost sight-readably, but many would take a lot of practice even for a virtuoso professional. There are a few passages that I still cannot work out how to play. Big hands (and, in at least one case, more than the standard issue of fingers) are needed for some pieces, and there is one that, however long I study it, I still cannot work out how on earth to play it as the written instructions don’t seem to tally with the notation. Most have at least some indication of speed, volume and tonal colour, but a surprising number have no such performance clues – but nor did most of Bach’s organ pieces.

The Bach pieces are of interest for the editorial approach. Rather than just republish the usual versions from the autograph manuscript P283, they are based on five other manuscripts (P801, P802, 22541/I-III) from the Weimar Bach circle of Krebs, a pupil of Bach, and Walther, a distant cousin and friend. Where an alternative reading exists in these five manuscripts, they have been adopted on the entirely understandable grounds that these later versions, from two people very close to Bach, may include additions or changes suggested by Bach. Where one of these variant manuscripts is used, the version published is taken from a single, named, source, rather than collecting together changes from various sources. Three of the four Bach pieces in this volume are from these alternative sources. A brief critical commentary gives information, although one difference is not mentioned – the Bach prelude of Wer nur den lieben Gott lãsst walten (BWV 642) from the Krebs manuscript P801) has a rather curious additional minim note in a second, lower tenor voice that lasts only for the second half of the penultimate bar (pictured).

The edition is in portrait format (233x305mm) and has clear print. Empty pages have been included to ease page turns, although one more would have been helpful to avoid a turn at page 97. Pages do not lie flat on a music desk so you will either need to break the back, repeatedly, or use those little music stand hooks. Each piece is introduced by the chorale melody and words of the first verse, and a brief CV of the composer and first performance.

The new edition was launched at a short private recital in Westminster Abbey, with William Whitehead playing seven of the new compositions (five from the published volume), and one of Bach’s own pieces from the Orgelbüchlein. A future recording is planning in conjunction with Fugue State Films.