During Easter Saturday, I watched a broadcast from Berlin of the powerful Simon Rattle/Peter Sellars staging of the St Matthew Passion that I had reviewed back in 2014 at the Proms. And in the evening, an unstaged, but equally powerful Orchestra of the Age of Enlightenment performance in Basingstoke’s Anvil. The common factor was Mark Padmore, appearing as the Evangelist and, in the case of the OAE, as director. I don’t object in principle to stagings of the Bach Passions. Sellar’s use of the space in and around the orchestras was very effective, and I also liked Jonathan Miller’s inspiringly human reading in the mid-1990s, and Deborah Warner’s 2000 ENO staging of the St John Passion, which drew the audience directly into the unfolding drama. But sometimes just being presented with the music itself, without additional layering, is the way to focus on the complex human emotions that Bach portrays.  END_OF_DOCUMENT_TOKEN_TO_BE_REPLACED

If ever an organ was designed for the performance of contemporary music, it is the 1981 Detlef Kleuker instrument in Notre-Dame des Grâces au Chant d’Oiseau in Brussels, designed by Jean Guillou as a successor to his 1978 ‘hand of God’ organ in Alpe d’Huez.  In this CD, two talented young Belgian musicians perform works composed for them by Belgian composers Claude Ledoux and Jean-Pierre Deleuze. The combination of organ and solo 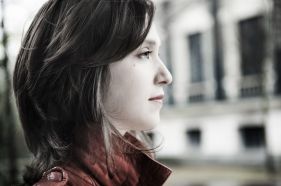 female voice is a beguiling one. In this case it is enhanced by a generous acoustic, fascinating music, an extraordinary organ and excellent recording techniques (the engineer gets his own CV in the booklet) – and, of course, by the musically and technically virtuosic organ playing of Cindy Castillo (left) and singing of Aurélie Frank (below). END_OF_DOCUMENT_TOKEN_TO_BE_REPLACED