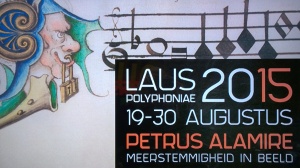 This year, Antwerp’s annual Laus Polyphoniae festival, now in its 22nd year, celebrated one it can claim as its own (at least for a period): the music copyist Petrus Alamire, creator of some of the most extraordinary music manuscripts in the decades around 1500. Born in Nuremburg, Alamire (a musical alias of Peter Imhof: A-la-mi-re)  soon moved to the Low Countries and quickly established himself as compiler of beautiful scores of music of Franco-Flemish composers, then at the peak of their importance. His clients included many of the crowned heads of Europe. His choirbooks contain more than 800 pieces, composed over a period of around 70 years, with the emphasis on masses, motets and chansons. Collectively they represent the development of the important Renaissance polyphonic style in the Low Countries and northern France. END_OF_DOCUMENT_TOKEN_TO_BE_REPLACED

For those with limited time but an insatiable urge to attend early music concerts, I can recommend the Tage Alter Musik festival in the delightful Danube city of Regensburg (the entire city centre is a World Heritage site). With no fewer than 17 concerts in just 4 days, this is not for the faint-hearted. But the musical rewards and the historical venues (which include extreme Baroque, austere Gothic and the Reichssaal, for centuries the seat of the Parliament of the Holy Roman Empire) are worth the attempt. END_OF_DOCUMENT_TOKEN_TO_BE_REPLACED