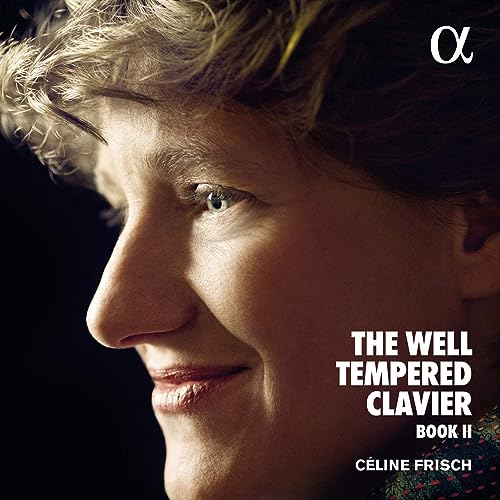 Following on from her CD of Book I of the Well-Tempered Clavier, Céline Frisch (o-founder of the Café Zimmermann ensemble) now offers us Book II. It was completed twenty-two years after Book I, in 1744. It was recorded on a 1998 two manal copy by Andrea Restelli of the single manual 1738 Christian Vater harpsichord now in the Germanisches National Museum, Nuremberg.

This second set of 24 Preludes and Fugues in all possible keys dates from a very different period of Bach’s life than the first. It dates from a period of obvious reflection where he looked again at many of his earlier works. For example, several of his early organ pieces were revised and collected together during this period, and he prepared a fair copy of the Johannes-Passion.

He also set himself some different criteria from the first book. One that I hadn’t deen aware of is pointed out by Peter Woolney in his notes. Referring to the London autograph, it is clear that Bach had pre-prepared four-sided folded sheets of paper for each Prelude and Fugue, limiting the length of each piece. In this performance, the longest movement is just over six minutes long, and several are less than two minutes.

Many of the fugues are built on the simplest of subjects, while other themes initially look impossible to weave into a fugal structure. Setting aside the intellectual use of counterpoint in the fugues and the wide variety of style of the Preludes, these 24 miniatures are an extraordinary reflection on Bach’s range of inspiration, ranging from the bubbly frolics of XV to the stately drama of XVI.

Céline Frisch plays with respect to the music and the moods that it creates. Her repeats are usually on the second manual, giving contrast within a piece. Her playing is relatively straightforward as far as personal mannerisms and interpretations are concerned – essential for repeated listening. The more dramatic moments are delivered with some force, while the gentler and more reflective moments are played sensitively.

Unlike many such recordings, some of which include notes about little else, there is no mention of the temperament of the harpsichord. There is occasional key colour, but nothing that would frighten the horses, so I would guess it is tuned to a very moderate unequal temperament.

The recording venue was a recording studio in the Southern Alps – an attractive looking place for a few days stay. The acoustic is warm, and the recording focus absorbs that alongside the detail of the instrument. The booklet, with notes by Peter Woolney, can be read here.