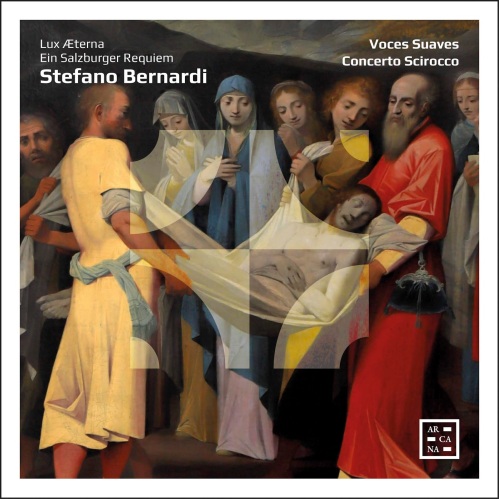 Stefano Bernardi (1577-1637) was born in Verona. He was an active member of the Accademia Filarmonica and became their Maestro della musica in 1606. He was appointed as Maestro di cappella at Verona Cathedral in 1611. In 1622 he became Court Kapellmeister to the Bishop of Breslau and Brixen, Archduke Carl Joseph. Following the Archduke’s death in 1624, Bernardi took up a similar post in Salzburg with the Prince-Bishop Paris von Lodron.

Ensembles Voces Suaves & Concerto Scirocco bring us this very welcome recording centred on the first recording of Bernardi’s  Salzburger Requiem (Missa pro defunctis sex vocum). It was composed for Salzburg Cathedral, which had only just been built after the destruction of its predecessor. Bernardi’s music survives in Salzburg Cathedral in three choirbooks, dating from 1629, 1630 and 1631. The Missa pro defunctis is from the first book, alongside other Mass settings. The other two volumes contain music for the Offertorium and the Magnificat & Responses respectively. Bernardi’s music represents the emerging Italian concertato style with its emphasis on a polychoral structure and the stile concertato.

The Requiem opens with a slowly evolving Introitus in alternatim style with the plainchant alternating with six-part chorus verses. The most substantial movement is the moving and meditative Sequentia, lasting nearly 15 minutes. The Dies irae chant is threaded through the polyphonic texture as well as chanted between the sections. It is good to hear the clear treble (female sopranos, rather than boys) as well and lower voices in the chants. The polyphony texture reduces to three or four parts in some of the sections. The remaining Mass sections follow in similar reflective mood and style, the final Libera me the only section where more dramatic mood is revealed.

The Mass is followed by three instrumental Sinfonia from the Concerti academici (Venice, 1616) with violins and viola da brazzo joining the forces. These are alternated with further vocal pieces: the powerful Ad te, Domine, levavi a8 from the second Salzburg volume of 1630, the Letanie a 4 concentrate published in Venice in Rosarium Litaniarium (1626) and the concluding De profundis clamavi ad te, from the volume Domine Psalmi(Venice, 1624).

The performance by Ensembles Voces Suaves (one of the EEEmerging groups) and Concerto Scirocco is outstanding. The excellent programme notes are written by Eva Neumayr, head of the music collection of the Salzburg Archdiocese archive, and an acknowledged expert on the music of the Cathedral.