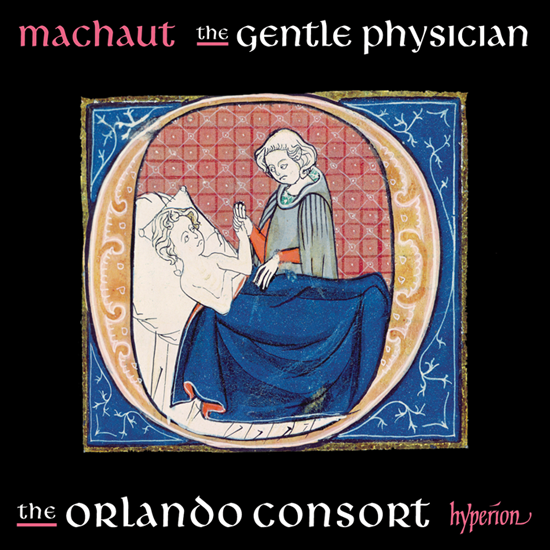 This is the sixth recording in The Orlando Consort’s complete Machaut series. It focusses on Machaut’s songs of courtly love and its various ups and, more usually, downs. Lady Fortune is not always a comforting friend, and the opening and closing De Fortune ballads reflect both the positive and negative aspects of her personality. The ‘gentle physician’ (dous mire) of the title is Hope, mentioned as the only remedy for unhappy lovers in the extended S’onques dolereusement, also known as Le lay de confort. Machaut (c1300-77) was, and still is, one of the finest 14th-century poet-composers, He was one of the first to whom we have biographical knowledge and a substantive collection of pieces, but also one of the last of the tradition of poet-composers. Part of the ars nova tradition of the Franco-Burgundian region, his compositions set the scene for the late Gothic and early Renaissance style.

This recording demonstrates Machaut’s wide variety of compositional styles, ranging from the deceptively simple melody of De bonté, de valour, the first of three virelai’s included, here all sung with solo voices, to the complexity of the larger scale polyphonic pieces, of which the massive ‘Le lay de confort’ – S’onques dolereusement is the finest example. It has an extraordinary musical structure, consisting of twelve three-parts canons, creating a fascinating effect with the different phrase ends in each of the twelve stanzas. Changes in pulse reflect changing moods of the underlying text. The first stanza of the opening De Fortune is repeated at the end with the addition of a fourth voice, added by somebody else.

Detailed programme notes (in English, French, and German) helpfully follow the order of the pieces and give well-explained information about the textural and musical material. The texts are all translated into English. This is the sort of music that can be allowed to just waft over you and, in some way, that is preferable to trying to follow the textural and structural complexities of the individual pieces. But, perhaps after a few wafting plays, it is well worth reading the notes for each piece.

The singing of the four members of The Orlando Consort is, as expected, outstanding. They have avoided the temptation of trying to do clever things with the music, letting it unfold naturally.