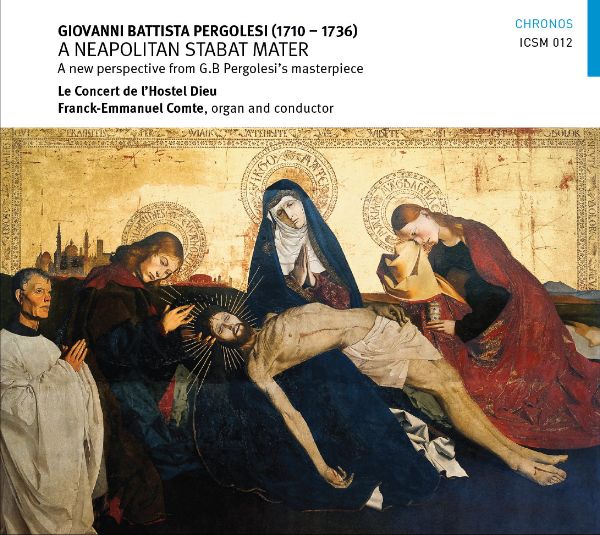 This is a recording of Pergolesi’s famed Stabat Mater, but not quite as you may know it. Composed in 1736 for the Neapolitan  Confraternita dei Cavalieri di San Luigi di Palazzo, the Stabat Mater was said to have been completed (along with a companion Salve Regina) moments before Pergolesi died of tuberculosis in a nearby monastery. Despite criticism of its operatic style, it’s fame quickly spread, with several composers, including Bach, making arrangements of it. This recording by Le Concert de l’Hostel Dieu is based on an unpublished score found in the library of the Académie du Concert in Lyon, France, now in the Lyon municipal library. Alongside some minor modifications in the instrumental parts, the key departures from the usual text are that the second solo voice is a baritone rather than an alto, presumably because of the lack of a castrati singer, and the setting of O quam tristis is for five voices. That, on its own, would be of sufficient interest, but this recording also inserts traditional Neapolitan music including polyphonic versions of the Stabat Mater and Miserere, some (very) secular songs (Donna Isabella, La Carpinese) and two tarantellas.

The recording opens with a  polyphonic plainchant Stabat Mater from the d’Ostuni manuscript before the first three verses of the Pergolesi. Then comes the first of the Neopolitian insertions, with stanzas of the canzona Donna Isabella alternated with verses from a Miserere. Donna Isabella is feeling sorry for herself after losing “thirty-three castles in the flat region of Puglia and Basilicata . . . and the beautiful Salerno”. Over a simple theorbo accompaniment, the hauntingly distant voice of Isabella is comforted by the even more distant sound of the Miserere.

Later Neopolitan inserts provide an ‘interesting’ contrast of texts that those of a particularly sensitive religious nature might want to avoid reading the texts of. The tarantella A cantina sings the praises of the wine at Aunt Teresa’s hostel, that apparently helps to ‘refresh the bowels’ and helps those who partake to forget various troubles, including those of ‘having daughters’. The catchy arrangement opens with virtuosic recorder playing and a tapped-out rhythm. The La Cicerenella tarentelle sings the praises of said Cicerenella, who has a backside ‘that looks like a breadbox’. The final tarentelle, inserted between the last two Pergolesi verses is La Carpinese focussed on the fair lady’s breasts, the mere touch of which will apparently send you to Paradise. In contrast, the traditional polyphonic Neopolitan Stabat Mater is both musically and theologically a highlight.

The Pergolesi is given a very effective and rhythmically strong performance, avoiding the usual rather slushy over-romanticised interpretations and relishing in Neopolitan spirit and verve. There is slightly too much vocal vibrato from some of the singers for my taste, but otherwise, the singing is excellent. This is a live recording from the church of the Chazelles du Lyon (west of Lyon) during the 2015 Festival Lyrique en Lyon. The concluding applause is the only evidence I could hear of an audience, but there are some issues of microphone placement that affect the recording, although they were probably not an issue during the live performance. Some of the instruments are rather closely-mic’d, including the chamber organ where the initial transients (aka ‘chiff’) are sometimes too audible – although that percussive sound is very effective in the opening of La Cicerenella and in the two instrumental tarantellas. The voices are occasionally acoustically distant, and the resonance of the church can blur the sound. That said, this is a fine performance of an evocative take on repertoire and repeated listening soon overcame my initial concerns.

This programme was performed in St John’s, Smith Square in November 2018, and Le Concert de l’Hostel Dieu return there on 8 April 2019 during the London Handel Festival tocelebrate the 400th anniversary of the birth of Barbara Strozzi. Details here.