Jean-Joseph Cassanéa de Mondonville (1711-1772) was born in Narbonne in the south-west of France. He moved to Paris in 1733 and almost immediately came under the patronage of Madame de Pompadour, joining the Concert Spirituel and the Chapelle Royale as a violinist. Although continuing is career as a violinist, he soon rose through the musical ranks (becoming director of the Concert Spirituel and Maître de musique de la Chapelle) and also became famed as a composer of opera and sacred music. Although never quite reaching the musical heights of his predecessors Lully and Rameau, his compositions reflect the changing mood in the middle third of 18th century France.

The first three of his 17 Grands Motets was performed in 1734, the rest following over a period of some 24 years. Only nine of them survive. The four motets recorded here represent the range of Mondonville’s motet style from 1734 to 1748. They are not presented in chronological order, but listening to them in order of composition is worthwhile. The earliest, Magnus Dominus, composed in his very early 20s shortly after he arrived in Paris, reflects the move towards a simpler style of composition from the earlier famed Parisian composers. The opening movement is built on a repetition of the five-note phrase Magnus Dominus, and alternates haute-contre solos with choral and orchestral passages, the later including prominent flutes. Other sections include soprano solos, notably in Deus in domibus ejus cognoscetur with its oboe passages, and Laetetur mons Sion with high choir and flute episodes. An example of Mondonville’s more powerful writing comes with the chorus Ipsi videntes sic admirati sunt, the unison voices and scurrying strings depicting confounding and frenzied trembling. 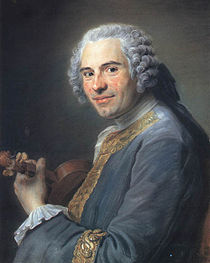 The other motets show similar imaginative composition. The second CD includes premiere recordings of Nisi Dominus and Cantate Domino, the former with some colourful depictions and orchestrations, including some wonderfully sonorous bassoon passages. A mid-18th century writer described Mondonville’s motets thus: “The easy-going and graceful melodic lines, the harmonic effects, the brilliant choruses found in these motets will always warrant the approval of music lovers.”. This perhaps amplifies the fact that Mondonville is writing in a different, and simpler, style to Lully and Rameau. That might put those familiar with these earlier composers off, but for those not familiar with the French motet repertoire, Mondonville would be a good introduction to the style, before moving onto his more complex, and more Baroque, predecessors.

I was impressed with the Purcell Choir and Orfoe Orchestra, and several of the soloists on this CD, when I heard them in their Müpa Budapest home base recently (see review here). These motets were recorded in the acoustically impressive Béla Bartók National Concert Hall, using Müpa Budapest’s own recording facilities. It was produced in partnership with the Centre de Musique Baroque de Versailles. The choral singing and orchestral playing is impressive, as are most of the soloists, although excessive vibrato occasionally interferes with the delicate French ornamentation. Haute-contre Mathias Vidal and soprano Daniela Skorka are particularly fine. Conductor György Vashegyi has built something of a specialism in French music, and it shows in his sensitive direction. Louis Castelain prepared editions for two of the motets and also provides programme notes on Mondonville’s life and these motets. The CD notes are in English, French and German, the text translations in English and French.

Further examples of Montonville’s compositions can be heard in a new recording of his 1734 Opus 2 Trio Sonatas, reviewed here. I also have other French music CDs from the Purcell Choir and Orfeo Orchestra which I will review in due course.

One thought on “Mondonville: Grands Motets”