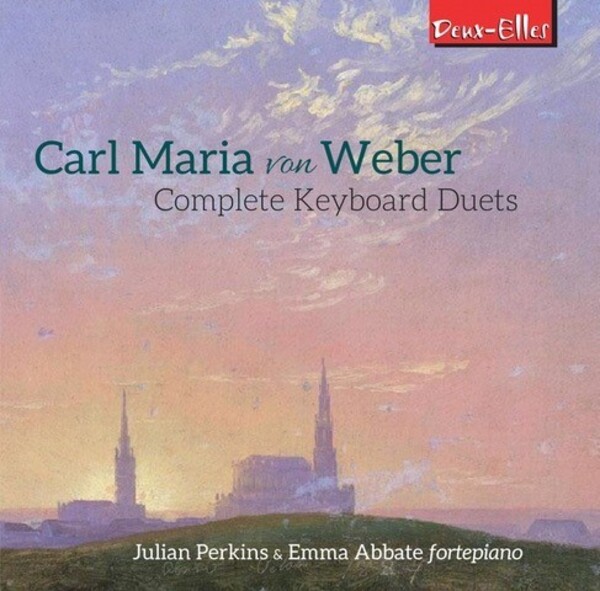 Weber is one of those composers who are chiefly remembered for a single work, in his case, the opera Der Freischütz. This recording of his three sets of piano duets (two players on one piano) sheds a wider light into the life of this important composer. It follows two earlier recordings of Mozart Piano Duets (reviewed here and here) from Julian Perkins and Emma Abbate. They use two historic pianos dating from c1795 (Mozart) and 1826 (Weber).

The three sets of duets span 17 years of Weber’s life with publication dates ranging from 1803 (aged 17, by which time he had already written operas and started music criticism) to 1820, a year before Der Freischütz and six -years before his untimely death at 40. The music demonstrate the inevitable development over that period of time. The 30 pieces (which range in length from 1’26 to 5’58) show a remarkable range of musical styles.

All three sets include a set of variations and conclude with a Rondo. Although probably not intended to be performed one after the other, the balance between the different movements makes playing the complete sets musically attractive. The early set shows the teenage Weber developing ideas that are clearly influenced by the music of others, but also show a very competent grasp of musical structure and harmony. Each has a tempo indication as well as a title, such as Romanze, Marcia and Rondo.

The second set was published around 1810 and includes a Mazurka and shows a marked difference in compositional skills, a pattern continued in the mature third set. The CD was recorded at the Richard Burnett Collection of Early Keyboard Instruments (formally the Finchcocks Collection), using two historic pianos dating from c1795 and 1826.

Julian Perkins and Emma Abbate play with a fine sense of cohesion, the two pairs of hands balanced perfectly in tone and volume. The two period pianos add a much-needed sense of the sound of the period, allowing a sensitivity of touch and articulation. Incidentally, they are an excellent example of musicians surviving coronavirus lockdown with an enterprising series of on-line live streams from their home, some of which can be seen here. More information on this CD and a link to an audio extract can be seen here.