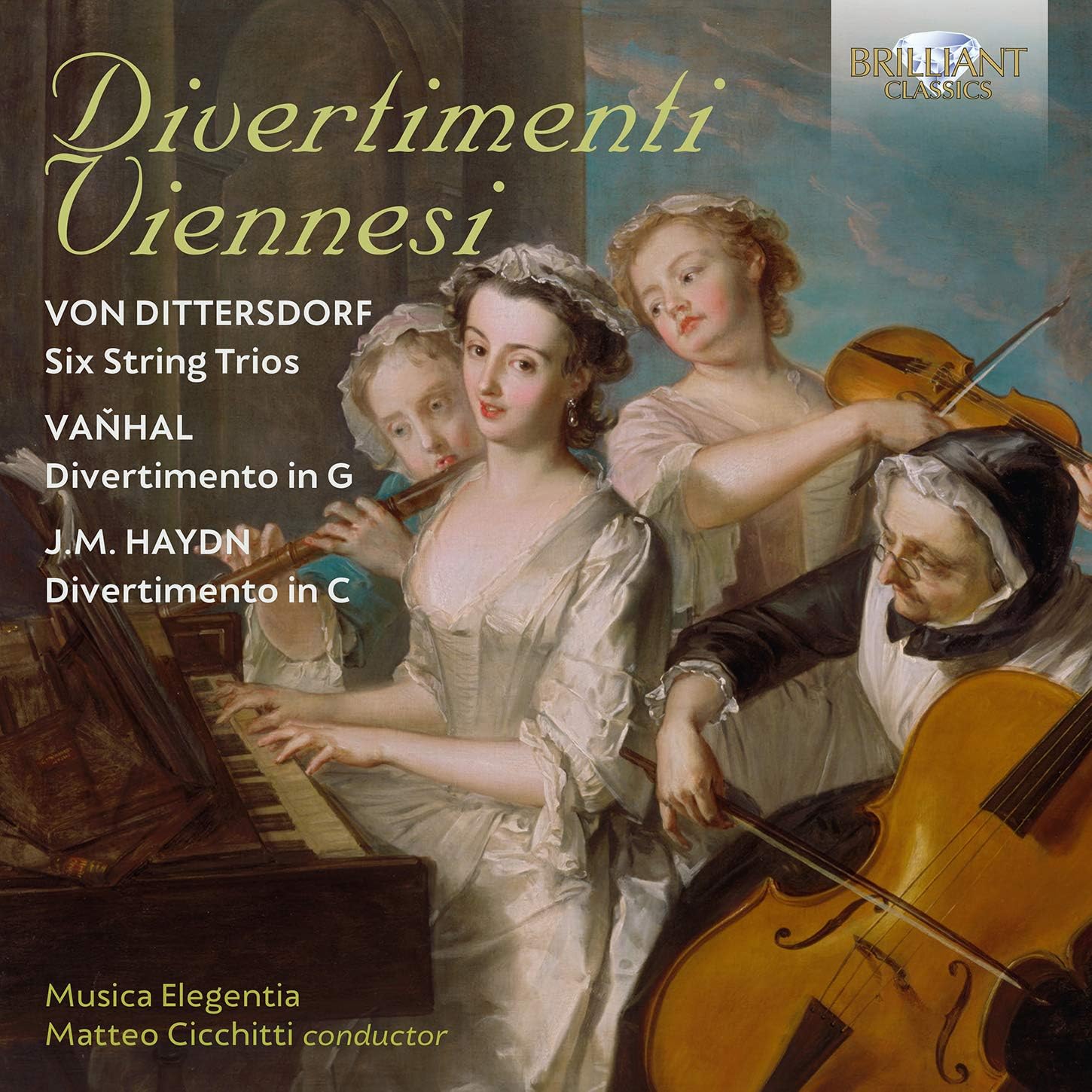 This recording features three string-playing composers who were active in Vienna in the second last half of the 18th century: Karl Ditters Von Dittersdorf, Jan Křtitel Vaňhal (or, in his modern Czech spelling, Johann Baptist Wanhal) and Johann Michael Haydn. Dittersdorf and Vanhal were two members of the famous ‘Composers’ Quartet’ alongside Joseph Haydn and Mozart. The performers are Musica Elegentia: Gian Andrea Guerra (violin), Mauro Righini (violin & viola) and Matteo Cicchitti (violone & director), with Gian Andrea Guerra having by far the most important role.

Dittersdorf’s six trios (on CD1) are all two-movement pieces, usually with an Allego opening movement followed by a minuet, although one starts with an Andante. They are light and frothy in character, the boom of the violone making for an unusual texture, with the large gap between the bass and the two violins. The recording gives the violone far too much emphasis for my liking, perhaps explained by the fact that the violone player is also the director of the three-strong group.

The two Divertimenti recorded here (CD2) were composed in the 1760s. Such Divertimenti were popular with the burgeoning middle classes of Vienna for home use. They are brief, simple, multi-movement pieces. The first violin takes the melodic lead, with the viola and violone (double bass) generally reduced to a supporting role.

Michael Haydn’s C major Divertimento (MH 27) is in the conventional, four-movement structure, while Vaňhal’s five-movement piece is centred around an attractive Adagio within two minuets and a pair of Allegro outer movements. The first is rather rhapsodic, while the spirited last movement is full off syncopations. The Hadyn Menuet has the two upper instruments playing at an octave unison, with the violone plucking away with its staccato bass. The repeat is all plucked. The Finale: Presto is good fun.

The overpowerful 16′ bass continues with these two Divertimenti, creating a curious, and almost humourous character on occasions. The upper voices for both are violin and viola. The Vaňhal’s Divertiment lists the violone as an alternative to a cello, whereas in the Hadyn, the middle part was intended for a cello, although some sources suggest a more conventional violin, viola, cello combination.

Regardless of the name of the intended instrument, the pitch at which it should play seems from the scores to suggest performance at 8′ pitch. The programme notes do not discuss why the decision was made to play at 16′ pitch.  They describe the tone as “clear and transparent“, which is not really the impression I get when listening. The rather complex programme notes suggest enigmaticly that “The concertation of the Master Matteo Cicchitti tends to exalt precisely the dialogic principle, therefore the timbre peculiarities of the three instruments involved“. Something might have been lost in translation but, apart from being rather gushing in praise of the performer, I am not sure if this really clarifies things.

Gian Andrea Guerra’s violin playing is impressive, particularly in his subtle elaborations on the repeats. More information, and the recording can be heard here.