The latest I Fagiolini touring concert programme and CD is based on the Leonardo da Vinci 500th anniversary.  They launched the CD in London’s Milton Court with a talk by Martin Kemp, Emeritus Professor in History of Art at Trinity College Cambridge illustrated by examples of Leonardo’s work and extracts from the I Fagiolini CD. The title ‘Shaping the Invisible’ comes from Leonardo’s own description of music. It is often forgotten how important music was in his life – indeed, despite his achievements as a painter, sculptor, architect, engineer, pioneer of flight, anatomist, scientist, Vasari records that music was probably the focus of his first job outside Florence when he moved to Milan.  ‘Shaping the invisible’ is also the title of the new commissioned piece by Adrian Williams and poet Gillian Clarke, reflecting Leonardo’s scientific investigations and fascination with flight.

“Music cannot be regarded other than as the sister of painting” was another of Leonardo’s observations, and this concert united the two siblings along with commentary from Martin Kemp on the illustrations. The link between the pictures and music wasn’t always all that obvious, even after explanations, and they certainly didn’t reflect the music that Leonardo might have known or been influenced by. They opened with the recently authenticated Salvator Mundi painting, accompanied by settings of ‘Saviour of the World’, by Tallis and Howells. Tallis’s essay in imitation was sung with the assumed original voice types, at a lower pitch than is often heard, giving a welcome sense of gravitas. Howell’s double choir setting from his Requiem (in English) was in the Tudor-influenced style so beloved of the period. Hollingworth suggested that he had chosen the piece as he thought Howell’s overlapping phrases suggested the folds in the drapery of the Angel Gabriel.

Leonardo’s gorgeously enigmatic La Scapigliata was accompanied by Cipriano de Rore’s Or che’l ciel e la terra and its yearning for the unobtainable woman. The Mona Lisa’s equally enigmatic image changes the averted gaze of the La Scapigliata for the direct look, and provided the link to the lugubrious opening to Monteverdi’s Era l’anima mia with its direct emotional response to the object of devotion ‘pitiful look’. It being I Fagiolini, there were the inevitable moments of silliness, in this case with Vechi’s Commedia dell’arte-based L’Amfiparnaso – Daspuo che stabilao, in response to Leonardo’s ‘Five Grotesques’. Hollingworth gleefully announced that somebody had previously referred their performance of this as “a shocking waste of talent”, but it did seem to amuse the usual I Fagiolini supporters.

Adrian Williams’ Shaping the invisible was paired with one of Leonardo’s glider wing designs, its words based on ‘bats on the evening air’. It features a wide range of musical and vocal textures, including spoken text. Changes in Gillian Clarke’s printed text and the nature of the music made following the words tricky at times, although the repeated ‘Listen Leonardo’ came through clearly. On the CD, special effects are added, including varying the focus and reverberation of the recording. It is an evocative piece, that sounded much better live than in the rather-too-clever version on the CD.

Victoria’s Tenebrae Responsories were seen as a musical equivalent to The Last Supper, and were certainly more appropriate than I Fagiolines irreverent staged photo version, pictured above. The geometric perfection of Vitruvian Man was matched by a Swingle Singers version of the opening of Bach Art of Fugue. One of Leonardo’s knot designs (Fantasia dei Vinci) was paired with an Agnus Dei y Josquin des Prez.

The singing is, as expected, excellent. Over the years I Fagiolini have reduced the amount of vibrato in their consort singing, to the benefit of the music, and this concert was an example of this welcome approach. Special mention must go to soprano Helen Neeves for stepping in for the almost indisposed Anna Crookes, and for Anna Crookes for not being indisposed enough not to sing in a couple of numbers. 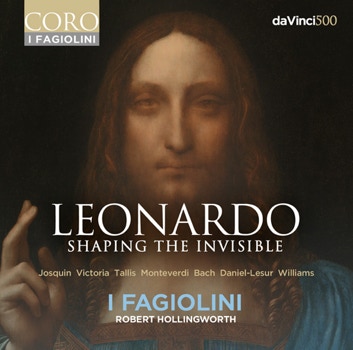 The CD has a slightly different line up of singers than the launch concert, particularly in the soprano line-up. It also has an additional track, Monteverdi’s Tempro la cetra performed with instruments, and several different interpretations of the music performed live, usually through messing about with the recording process and/or adding additional silliness to the silly pieces. It includes a spoken introduction to the Vechi’s Commedia dell’arte piece, notes on the paintings from Martin Kemp and the music from Robert Hollingworth in the programme booklet.

If you are more interested in the music of the period, I have been a sent a spectacular CD-book with the same idea of pairing music and pictures, but with music from Leonardo’s times. My review is here.