Johann Adam Reincken was one of the most important and influential 17th-century North German organist-composers. He forms a unique link between the Sweelinck influenced organists of the earlier part of the century and JS Bach. Little is known about his life, and very few of his organ compositions survive. He was born to North German parents in Deventer in The Netherlands around 1643. An earlier supposed birthdate of 1623 is now accepted as incorrect. He moved to Hamburg in 1654, aged just 11, to study with the famed organist of the Katharinenkirche, Heinrich Scheidemann, a pupil of Sweelinck. After a brief return to Deventer, he came back to Hamburg in 1659 as Scheidemann’s assistant, replacing him as organist in 1663 on Scheidemann’s death. As was the custom of the time, he married one of Scheidemann’s daughters in 1665. He remained there for 60 years until his death in 1722. As well as his church duties, he co-founded the Hamburg Opera and was involved in the city’s musical life. He is known from two pictures dating from around 1674; the portrait painting and the now well-known ‘Musical Company’ painting by Johannes Voorhout. 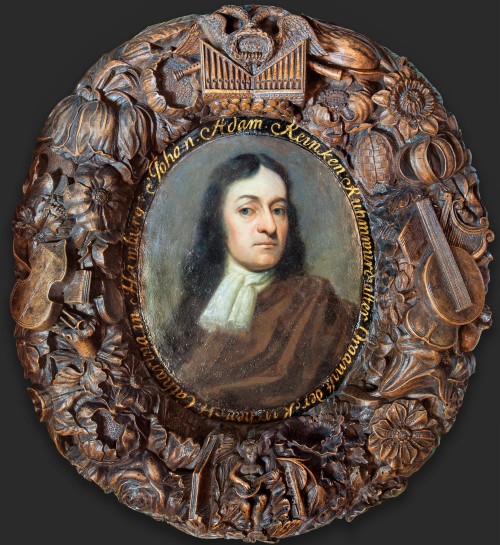 Both paintings portray a distinguished, confident and wealthy man, the Musizierende Gesellschaft painting, in particular, giving a fascinating indication of the lifestyle and personas of the two most distinguished composers of the North German 17th-century –  Reincken and Buxtehude. Reincken is shown playing the harpsichord, dressed in an elaborate and expensive gown. It perhaps supports a comment by (a possibly biased) Mattheson that Reincken was a “constant lover of women and the Ratsweinkeller”. Buxtehude is shown playing the viola da gamba on the left of the painting, his left-hand fingers forming the notes D and B. In the foreground is a sheet of paper with a musical canon and the phrase In hon: dit: Buxtehude: et Joh: Adam Reink: fratres, indicating the close friendship between the two famous musicians. Despite a lifetime in Hamburg, Reincken chose to be buried in Buxtehude’s city of Lübeck. 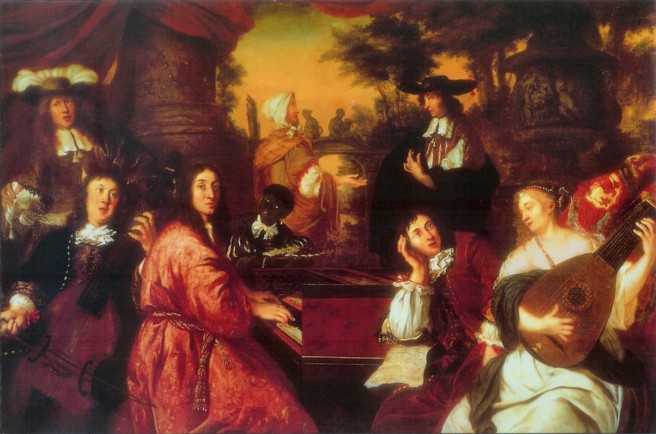 In modern times, Reincken has become known through his links with JS Bach, who knew and admired Reincken from his childhood school days in Lüneburg. Aged around 15, Bach copied out An Wasserflüssen Babylon Reincken’s monumental chorale fantasia. In 1720, shortly before Reincken’s death, Bach visited Hamburg and improvised a lengthy fantasia on the same chorale in homage to Reincken, who commented: “I thought that this art was dead, but I see that it lives in you”. Bach also transcribed several of Reincken’s instrumental pieces for keyboard.

The choral fantasia on An Wasserflüssen Babylon is the longest and finest of all such compositions surviving from the North German 17th century. At 337 bars, and lasting about 20 minutes, it may have been written as the concluding part of his time with Scheidemann, as a kind of final thesis. It is also suggested (JG Walther, 1732) that it was written as a response to criticism from a ‘Musicus’ in Amsterdam who suggested that Reincken was ‘foolhardy …. and presumptuous’ to take over from Scheidemann. When he received the score, he travelled to Hamburg and kissed Reincken’s hand in veneration.

The chorale is based on Psalm 137 (By the rivers of Babylon), the powerful lament of the Jewish people in exile during the Babylonian captivity. The words of the chorale omit the violence of the Psalm and concentrate on the tragic yearning for Jerusalem, the mourning and the depression which leads them to reject their musical instruments, hanging their organs and harps on trees. Reincken uses the emotional power of the text to present an almost operatic interpretation of the Biblical story.

Each of the ten lines of the chorale is treated in an extraordinary range of styles, starting in what seems to be a reference to Scheidemann’s style before introducing radical new technical and musical features. It is technically demanding to perform, notably with the spectacular passages at the end of several of the chorale lines. Several of these require the player to stretch the right hand down to the lowest notes of the organ, while the left hand is playing chords high up the keyboard, the convoluted cross-armed position only partially balanced by double-pedal lines that extend to the full width of the pedalboard.

The powerful Toccata in G is a fine example of a Stylus Phantasticus composition, with its contrasting sections including two fugues and fantasy-style interludes. The source is a copy made by JS Bach’s brother, Andreas Bach, presumably based on a copy that JS Bach owned. Bach’s own keyboard Toccatas include many influences from this piece. The anonymous Toccata in A is in a similar construction, but a more delicate style. It has a curious history, having been previously included in the complete works of several composers, including Purcell and Bach. Four of the five known sources are in England, and Pieter Dirksen (in his Breitkopf edition) has suggested that it came here from a colleague of Reincken’s in the Hamburg Opera who moved to London in 1690.

The organ that Scheidemann and Reincken played in the Hamburg Katharinenkirche dated back to the 16th-century, with both composers overseeing rebuilds to create what was then the largest organ in the world. It was famed for it’s 32′ pedal stops, added by Reincken in 1674. It was destroyed in 1943 but was reconstructed in 2013 to its specification at the time of Bach’s visit in 1720, based on the few surviving historic pipes.  The 2012 Richards, Fowkes & Co organ in St George’s, Hanover Square (Handel’s church) is eminently suitable for music of this period.