The setting was clearly Seville, although the dating takes a little while to reveal itself. Glorious architectural depictions of Moorish architecture form the backdrop to the action, the toings and froings during the overture cleverly disguising what would become the true time setting. Only one character gave a clue, turning out to be Barbarina (Nikola Hillebrand), the leggy gardener’s daughter, tottering about on platform shoes in a mini-dress. The reveal comes when a very 1960’s red sports car rolls onto the stage and the glammed-up aristos step out. The story of the car can be seen in the video link here. A remarkable amount of work for a few minutes on stage but, I would imagine, with a future of endless fun for Glyndebourne staff. 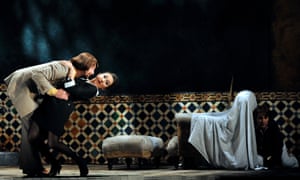 Although to a certain extent, this production rather skated over the depth of emotion and character development that is evident in Mozart’s writing, the focus on the comedy aspects of the tale was, I am sure, also very much in Mozart’s mind. With elements of the theatrical farce, Carry-on films, and a reminder of how dreadful dancing and fashion were in those far-off days (which practically all the Glyndebourne audience would remember well), this was a fascinating insight into two periods of social and cultural change – the 18th century Enlightenment and the enlightened sexual hedonism of the early to mid 1960s. Apparently the choice of the 1960s came about almost by accident, as a result of trying to work out a genre for the clothing swaps of the plot. But it worked.

Sexual innuendo was there from the start, initially the form of crotch-fumbling and pelvic thrusting. The Count and Don Basilio were both repulsive creeps of the sort that would nowadays have got a well-deserved slap, while Cherubino (as portrayed by the delightful Natalia Kawalek in a fabulous shortish-trouser role) was a hormone-riddled awkward teenager with his hands almost permanently down his trousers as “every woman makes me tingle”. Golda Schultz’s Countess floated around in elegant kaftans, radiating beauty and conspiratorial elegance in equal measures, combining with Rosa Feola’s exquisite portrayal of Susanna as the powerful women who could outwit all the men-folk. This was helped by Gyula Orendt’s portrayal of the Count as a rather bumbling, rather than threatening, character. Davide Luciano’s depicted Figaro’s mood swings from bemused comedy to burning anger well.

The garden scene in the final act was pure farce, with the frenetically-paced deceits and deceptions perfectly timed. Only rarely did we get a moment of reflection or the revelation that these are more than paper-thin characters. And those moments often came from Susanna, notably in her gorgeous Deh vieni where she quietly steps aside from the assignations and garden goings-on to sing of her love for the hiding Figaro. Golda Schultz similarly excelled in her own reflective moment, Dove sono.

Jonathan Cohen’s direction was excellent, his slightly quirky but very effective hand and facial gestures demonstrating just what he wanted from the singers and players. The latter were the usual Glyndebourne period-instrument band, the ever excellent Orchestra of the Age of Enlightenment. Ashok Gupta impressed on fortepiano, avoiding the oft-heard temptation to over-elaborate his continuo realisations.