This is the 7th production of Die Zauberflöte at Glyndebourne, and the popularity of Mozart’s singspiel seems undiminished, judging by the sell-out of the entire run. This time it was directed by the Canadian partnership of André Barbe and Renaud Doucet, the former providing the designs, the latter the direction. If you are the sort of opera-goer who struggles with even the simplest plots and prefers to just let the music and the visual spectacle wash over you, this may be the Magic Flute for you. Musically, it was outstanding, with fine singing from a strong cast and excellent playing from the Orchestra of the Age of Enlightenment, directed by Ryan Wigglesworth. André Barbe’s scenery was inventive, based on enlarged versions of his pen and ink sketches and clever use of perspective. That said, there are many questions about Renaud Doucet’s overall direction, not least in the liberties taken with the plot to fit with his own ideas about what he sees as the ‘problems’ with the original concept and libretto. 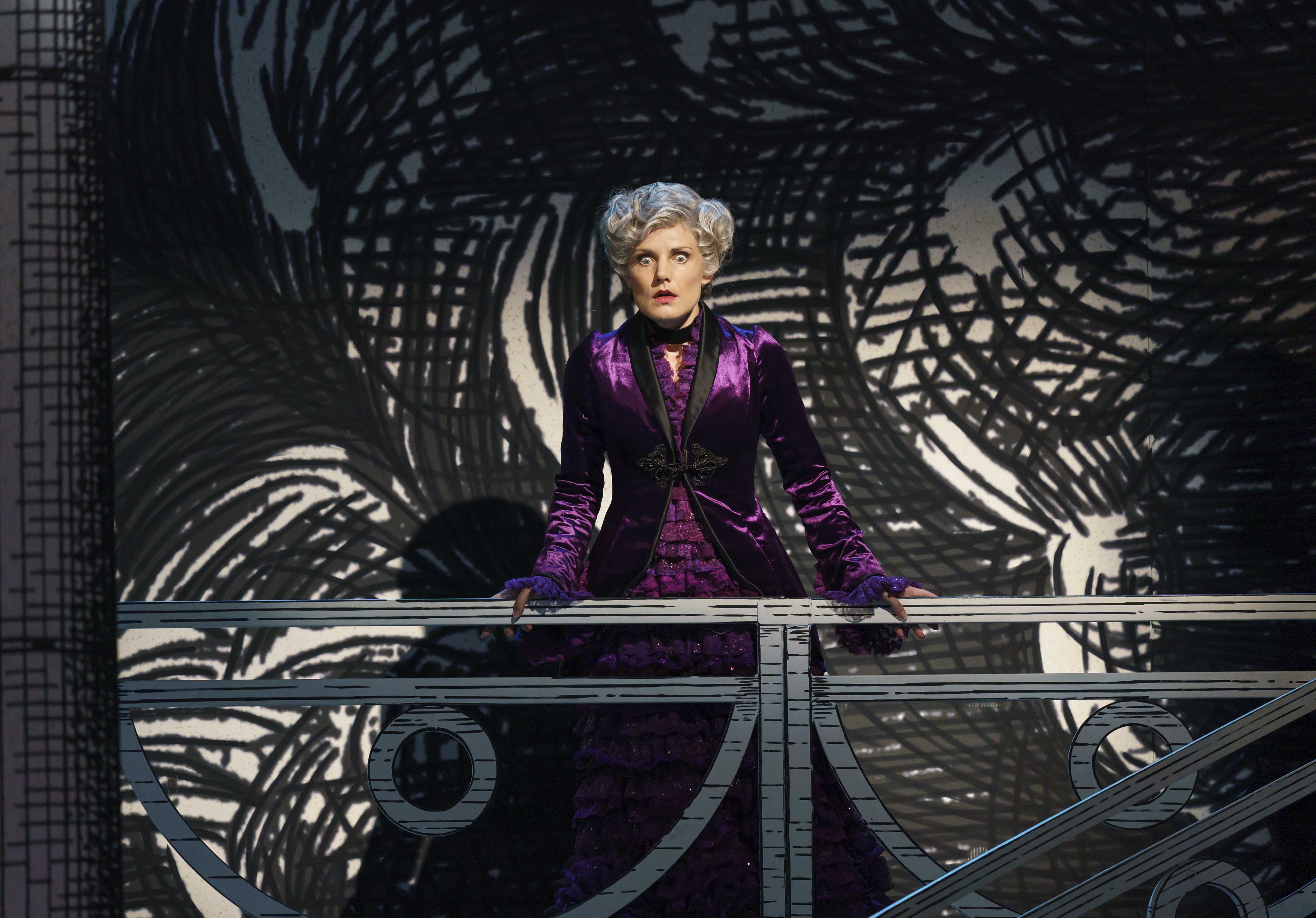 END_OF_DOCUMENT_TOKEN_TO_BE_REPLACED

Glyndebourne’s new production of Handel’s Saul was one of the highlights of the 2015 season, gaining rave reviews from, amongst others, me – see here, which also gives more background to the oratorio and the production. Glyndebourne has a long tradition of staging Handel oratorios, and I have no problem at all with that, subject to my normal reservations about what some some opera directors get up to with their productions. This was not entirely devoid of some concern on those grounds, but the sheer spectacle of Barrie Kosky’s direction and the musical integrity of Ivor Bolton’s direction allayed most of my concerns. The same applies to this revival, at least musically, on this occasion conducted by the equally distinguished Laurence Cummings, directing the same Orchestra of the Age of Enlightenment, Glyndebourne’s resident period instrument orchestra.

END_OF_DOCUMENT_TOKEN_TO_BE_REPLACED

It is no surprise that David McVicar’s 2005 production of Handel’s glorious Giulio Cesare proved to be so popular. Revived twice in the years just after its first performance, it now, after a gap of a few years, reaches its third revival. The first night on 10 June was the 38th performance at Glyndebourne, and the remaining performances are already sold out. Handel’s opera, and McVicar’s interpretation, really do tick all the boxes, added to which is the outstanding cast of the current run (three of whom survive from the original cast) and the return of the original conductor, William Christie.  END_OF_DOCUMENT_TOKEN_TO_BE_REPLACED

The tradition of bringing one of the season’s Glyndebourne Festival Opera productions to the Proms continued this year with their version of Mozart’s often overlooked opera La Clemenza di Tito. Although I didn’t see the fully staged version at Glyndebourne, I did see the live webcast of the performance, and my feelings about the much-reduced staging in the Albert Hall is influenced by that.

Director Claus Guth and designer Christian Schmidt’s Glyndebourne staging divided the world of Tito into two, a clean modernist upper floor executive office positioned above a reed-clogged swamp where much of the action took place. A video played during the overture (or didn’t, depending on which performance you saw) which explained, apparently, the director’s interpretation of why Tito relationship with his boyhood chum Sextus went sour. The transfer to the Proms retained the dual levels, but with Tito’s domain behind the orchestra on the upper steps of the stage, the swamp rather pathetically alluded to by about half a dozen clumps of reeds and a rock on the stage in front of the orchestra. But, as is so often the case with semi-staged or concert performances of opera, this rather helpfully pulled the opera away from being the inspiration of the director towards being that of Mozart. END_OF_DOCUMENT_TOKEN_TO_BE_REPLACED

For somebody who believes an oracle that he will be murdered by one of his nephews, it was particularly unfortunate that Danao, King of Argos, had 50 of them,

the sons of his brother Egitto, King of Egypt. As it happened, Danao had 50 daughters, so married them all off to his nephews with the instruction that they must all murder their husbands on their wedding night. With one exception, Danao’s plan worked, the exception being his daughter Hipermestra and her new husband Linceo, who had fallen for each other. The subsequent plot of Cavalli’s 1658 opera is based on the complex series of events that occurred after the 50 potential murderous nephews were now reduced to a more manageable one. END_OF_DOCUMENT_TOKEN_TO_BE_REPLACED

An interesting new departure for the Glyndebourne Tour is ‘Don Giovanni: Behind the curtain’, with the subtitle of ‘The essence of opera revealed’. Using the cast and orchestra of the real thing, but with a ‘community choir’ replacing the chorus for the final scene, this was an informal introduction to opera in general, and Don Giovanni in particularly. Created by presenter Paul Rissmann and the revival director Lloyd Wood, this was a lively and informal educational event.

The overture started as usual but then, during the opening scene, Paul Rissmann bounced on stage to interrupt the proceedings END_OF_DOCUMENT_TOKEN_TO_BE_REPLACED

Following their ‘posh frocks and picnics’ summer opera Festival, Glyndebourne hit the road during the autumn taking a reduced Touring Opera programme to places like Milton Keynes, Canterbury, Norwich, Woking, and Plymouth in November and December. They start the tour with around six performances at Glyndebourne itself, with a more relaxed dress code than the Festival and without the 90 minute dinner interval. With a slightly less elevated cast accompanied by the ‘Glyndebourne Tour Orchestra’ (rather than the Festival’s usual team of the Orchestra of the Age of Enlightenment and London Philharmonic Orchestra), the sets and production are otherwise essentially the same as in the Festival. This year they are touring a revival of Jonathan Kent’s 2010 Festival production of Don Giovanni (with Revival Director Lloyd Wood) and a new production of Madame Butterfly.

I didn’t see the 2010 production of Don Giovanni, or this summer’s Festival revival, so for me this was a new show. Set in a post-Mussolini Italy, the broody set, designed by Paul Brown, is focused on a massive central cube that presents all four of its sides, plus different incarnations of the central space, to the audience. It is a powerful image, but not without potential issues. Its overpowering presence centre stage pushes most of the action to the front or the side of the stage: no bad thing in itself, but giving a rather cramped feeling END_OF_DOCUMENT_TOKEN_TO_BE_REPLACED

The setting was clearly Seville, although the dating takes a little while to reveal itself. Glorious architectural depictions of Moorish architecture END_OF_DOCUMENT_TOKEN_TO_BE_REPLACED

Prom 39: The Abduction from the Seraglio
Glyndebourne Festival Opera, Orchestra of the Age of Enlightenment
Royal Albert Hall, 14 August 2015

The annual visit to the Proms of one of the current series of Glyndebourne Festival Opera productions is always a highlight. Transferring from the relatively intimate space of Glyndebourne’s opera house to the vast Royal Albert Hall obviously has its problems, but the more-than-semi-staging (in this case, with full costumes and props, but no scenery) brings a welcome chance to focus on the music. There were several surprises for those not used to the work, not least that it is a Singspiel, with a lot of spoken text, much of which is usually omitted – but not here. This gave the chance to experience Mozart’s music in its original context of incidental music to a play. The fact that the music is of the utmost complexity only heightens the suspense of waiting for the next bit to start. END_OF_DOCUMENT_TOKEN_TO_BE_REPLACED

I don’t normally read other reviews until I have seen for myself, but I was aware that Glyndebourne’s new production of Handel’s Saul had gone down well. And well it should. It is one of the most successful productions that I have seen. Directed by Barrie Kosky, with designs by Katrin Lea Tag and lighting by Joachim Klein, the sumptuous settings and costumes would inevitably tick most opera-goers’ boxes. Of course, Saul isn’t an opera, but one of his finest oratorios, written in 1739 and the first of his collaborations with Charles Jennens. There is now a long tradition of staging oratorios, not least at Glyndebourne, dating back to 1996 and Peter Sellars’ Theodora. And with its dramatic story of family intrigue, love and hate, a youthful hero and a king loosing his mind, it certainly has all the dramatic possibilities of opera seria.

END_OF_DOCUMENT_TOKEN_TO_BE_REPLACED

Rather surprisingly, given Glyndebourne’s devotion to Mozart, La Finta Giardiniera was the first time they have staged any of his early operas (6 July 2014). Although obviously not on a par with the da Ponte operas, these earlier works are fascinating.  Had he died aged 20, I reckon Mozart would still rate pretty highly in musical history. That said, La Finta Giardiniera is not amongst the Mozart greats, and needs careful handling. Covent Garden didn’t altogether succeed in their troubled 2006 attempt although, more recently, the Academy of Music gave a commendable concert performance at The Barbican.

The plot is the usual nonsense. Nardo (who is really Roberto disguised as a gardener) loves Serpetta who loves Don Anchise who loves Sandrina (who is really the Marchioness Violante, and is also disguised as the ‘secret gardener’ of the title) who loves Count Belfiore (who previously stabbed her and left her for dead) who loves Arminda who used to love Ramiro but jilted him and would be very surprised if he happened to turn up unexpectedly. Musically, the 19-year old Mozart is starting to challenge the supremacy of opera buffa by introducing elements of opera seria, treating this buffa plot with seria intensity. The opening is pure buffa, with the characters appearing to be happy bunnies until you hear the words of the individual solos and asides. Another feature of this work is Mozart’s early development of his complex Act finales, one magnificent example coming at the end of the first act.

Director Frederic Wake-Walker set the goings-on in a Germanic Rococco-style room, the fabric of which deconstructed as the evening progresses, as did some of the characters. Christiane Karg’s Sandrina was the vocal highlight from a very strong young cast, her pure tone contrasting with the rather silly portrayals of Belfiore (Joel Prieto) as a wimp and Ramiro (Rachel Frenkel) as a Goth. Robin Ticciati (Glyndebourne’s music director) directed the ever-excellent Orchestra of the Age of Enlightenment with a fine sense of pace. But, even with cuts, it was a rather long three hours.