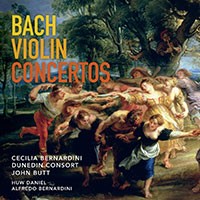 This is a spectacular CD from the ever excellent Dunedin Consort and their leader, violinist Cecilia Bernardini, this time in a solo role. She opens and closes the programme in partnership, first with her father, the distinguished oboist, Alfredo Bernardini, and then with fellow violinist Huw Daniel. Apart from the short central Sinfonia from the cantata Ich hatte viel Bekümmernis, with its exquisite oboe solo, the rest of the nicely symmetrical programme is devoted to the playing of Cecilia Bernardini, with Bach’s E major and A minor violin concertos. And what playing it is. Subtly sensitive, and superbly articulated, she demonstrates a real grasp of Bach’s often complex melodic lines. Her delicacy of tone is matched by her fellow instrumentalists, the chamber-like quality of their playing, and John Butt’s direction and harpsichord continuo playing, being just right for the music, which was almost certainly intended for small-scale performance amongst fellow music lovers.

The opening pairing of Cecilia with her father, Alfredo Bernardini, in BWV 1060R, shows a family fondness for exquisitely articulated and phrased musical lines, the latter with a compelling sense of the long phrase, the former with a violinist’s attention to the detail of individual and pairs of notes. My only slight quibble is that the recording balance of the oboe could have been a little more accommodating to the violin, which is sometimes overpowered. Cecilia Bernardini’s two concertos highlight her individual skills. She wears her obvious technical ability lightly, focussing on the delicacies of the musical line rather than mere show. And I love her sense of rhetoric, always alert to the structure of the melodic line.

Alfredo’s solo in  Ich hatte viel Bekümmernis is excellent. As is Huw Daniel’s contribution to the final double concerto.