END_OF_DOCUMENT_TOKEN_TO_BE_REPLACED

Literary history is full of laments, from the very earliest writings. They occur in all religions and have been the foundation of much musical expression in all parts of the world. So an entire CD devoted to such Lamento is not such an unusual approach to building a satisfying musical programme. And this recording from the French ensemble Café Zimmermann fulfils the brief excellently with music from the 17th-century German speaking realms.

END_OF_DOCUMENT_TOKEN_TO_BE_REPLACED

Johann Heinrich Schmelzer (c1623-1680) was born in central Austria, moving to Vienna sometime in the 1630s where he spent the rest of his life working in the court of the Hapsburg emperors. He lived at a time when the cornett was beginning to lose position to the violin as the principal treble instrument. This is evidenced by Schmelzer’s own career, which started as a cornettist in the Vienna Stephansdom before making his name as a violin virtuoso, becoming court violinist to Ferdinand II/III and Leopold I. This CD redresses the balance towards the earlier instruments a little, by including arrangements for the cornett of pieces intended for the violin or other string instruments ‘played on the shoulder’. It also includes samples of the extraordinarily colourful instrumentations used by Schmelzer (and his Germanic colleagues), for example in the Sonata La carolietta written for violin, cornett, trombone and fagotto, and, in the Sonata à 5 adding a trumpet to that line-up.  END_OF_DOCUMENT_TOKEN_TO_BE_REPLACED 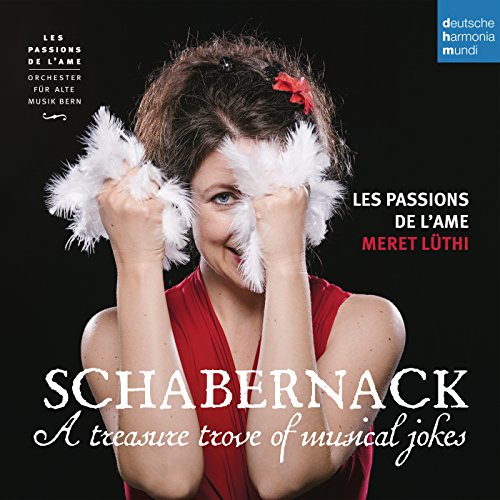 Schabernack translates as ‘prank, practical joke, hoax or shenanigans’, and the underlying theme of this CD by the impressive group Les Passions de l’Ame emphasises that aspect of the musical world of the Austrian and Hungarian Empires during the Baroque period.  The CD cover promises “Characters from the commedia dell’arte, playful birds, an astonishing virtuosity and a colourful instrumentation – the vivid imagination in late 17th century Austrian-German instrumental music loves to surprise”. But humour is only part of the inspiration for this recording. At the time, these Hapsburg domains were part of the defence of Europe from attacks from the east by the Ottoman Empire. Ottoman influence was spreading into Viennese life and music, with Turkish, or Janissary, music and instruments becoming part of the musical language of the time. END_OF_DOCUMENT_TOKEN_TO_BE_REPLACED

Georg Muffat is one of the most interesting composers of the high Baroque period, not least because of his ability to combine musical genres from many different countries. Born in Savoy, he studied with Lully in Paris before becoming organist in Strasbourg Cathedral before moving to Vienna, Prague and then Salzburg, where he worked with Biber in the court of the Prince Archbishop. After further study in Rome he moved to Passau. It was there that we find the first mention of the monumental Missa in Labore Requies, Muffat’s only surviving sacred work. The score came into Haydn’s hands, passing on his death into the Esterházy archives and final to the National Library in Budapest.

Until 1991 it was almost completely ignored, with doubt as whether Muffat was the composer, and the reason for its composition is still in doubt. END_OF_DOCUMENT_TOKEN_TO_BE_REPLACED

Guts and Glory
Spiritato!
St John’s Smith Square. 15 April 2016
The young period instrument group Spiritato! is one of the most exciting arrivals on the UK early music scene. Their most recent and most ambitious project is Guts and Glory, exploring the relatively little-known repertoire of military and art music for natural trumpets, which they contrasted with more reflective (or, at least, quieter) works by the same composers for strings and continuo. A key feature of this

performance was that the trumpets were not only valveless, but also had no finger holes to assist in the tuning of notes.  These finger holes (or ‘venting’ or ‘nodal’ holes) are in any case a relatively recent innovation, and may not have been used in early natural trumpets, at least not for the purpose to which they are now used; to make the tuning of the higher harmonic notes easier. Indeed, it seems that the original holes found in some instruments were actually place at the anti-node, rather than the node, and were therefore intended to silence the tricky notes altogether, rather than to try to bring them into tune.

Not surprisingly, it was the distinctive tuning that results from valveless trumpets was a major feature of the evening. When played in their lower END_OF_DOCUMENT_TOKEN_TO_BE_REPLACED