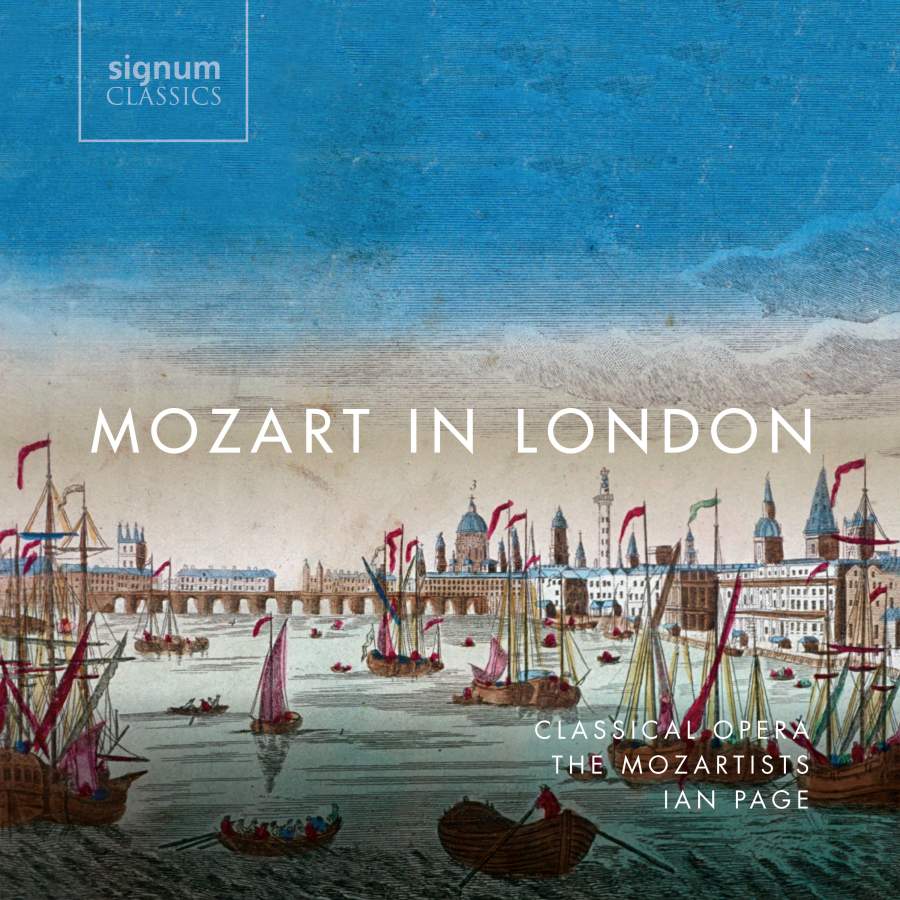 The Classical Opera/Mozartists Mozart 250 project has been underway for four years, with a number of successful recordings and events already under their belt. This (rather delayed) review of a double CD set released in May 2018 takes us back to the beginning of the project: the ‘Mozart in London’ Festival weekend of events at Milton Court in February 2015. The weekend included talks, discussions and concerts over a three-day period. My review of two of those events can be found here. Several other Mozart 250 reviews are here. The ‘250’ of the title refers to the years since Mozart’s childhood visit to London (23 April 1764), during which he composed his first significant works. The plan is to “follow the chronological trajectory of Mozart’s life, works and influences”, culminating in 2041, the 250th anniversary of Mozart’s death. These two CDs were recorded live during the various concerts of the 2015 weekend. They are an impressive record (quite literally) of the start of one of the most impressive and ambitious musical projects of our time.

As has become a feature of the recordings and concerts in the Mozart 250 project, the music is very mixed, combining works that Mozart wrote during each of the years in question combined with the works of others composers at the time of Mozarts stay in London. The programme includes Mozart’s astonishing first symphony, composed at just eight years of age, together with his other two London symphonies and the first of his concert arias, Va, dal furor portata, K21. These four pieces are the only Mozart compositions on the recording, the other composers represented being JC Bach, Arne, Abel, Pescetti, Perez, George Rush and William Bates. More than half of the works are first recordings.

Ian Page (interviewed here), the Founder and Artistic Director of The Mozartists and the driving force being the project commented at the start of the project that “An amazing amount of information survives about what music was being performed in London during Mozart’s 1764-65 visit; not only which operas were performed, but also the dates of performances and the singers who sang each role. Without a suitable context for reviving this repertoire, though, these scores have been languishing in the British Library for years. Our weekend of concerts at Milton Court in 2015 felt like a very special opportunity to steep ourselves in the musical landscape of a specific city at a specific (and significant) moment in history.”. This places this recording in a special place in musical history at a time when London was the leading European city for music, attracting musicians from many other countries, including JS Bach’s son Johann Christoph who became known as the London Bach.

The musical forces, both vocal and instrumental are excellent and give very convincing interpretations of the music. Singers are sopranos Ana Maria Labin, Anna Devin, Rebecca Bottone, Eleanor Dennis, and Martene Grimson; Helen Sherman, mezzo; Ben Johnson and Robert Murray, tenors. Steven Devine is the soloist in JC Bach’s Harpsichord Concerto in D (Op1/6). The only evidence that these are live recordings is the faded out applause at the end of the final piece. It a symphony that was assumed to be by Mozart (who wrote the only surviving score) but is actually by Karl Friedrich Abel, a colleague of  JC Bach in London.

CD 1    (* world premiere recordings)
Mozart Symphony No. 1 in E flat major, K.16
Arne Arias from Judith:
“Sleep, gentle Cherub! Sleep descend”*
“O torment great, too great to bear”*
Arne Arias from Artaxerxes:
“Amid a thousand racking woes”
“O too lovely, too unkind”
JC Bach Harpsichord Concerto in D major, Op. 1, No. 6
Non so d’onde viene from Ezio*
Confusa, smarrita from Berenice*
Arne “O Dolly, I part with a hole in my heart” from the Guardian Outwitted*
Duni “To speak my mind of womankind” from The Maid of the Mill*
Arnold “Hist, hist! I hear my mother call” from The Maid of the Mill*
Mozart Symphony in D major, K.19
Pescetti Caro mio bene, addio from Ezio*