The Handel Singing Competition has been a key part of the London Handel Festival since 2002. The finalists form a key part of future festivals, with invitations to return over the years ahead. The current festival includes such 20 past finalists, including specific solo recitals for the two main prize-winners (see here and here). Many successful careers have gained from the exposure that the competition offers although, for any potential applicants,  it is worth noting that some of the most famous of those were not first prize winners. Indeed, an unsuccessful finalist in the very first 2002 competition is currently top-of-the-bill at English National Opera (Lucy Crowe), and an unsuccessful finalist from last year is one of the stars of the current Royal Opera House/LHF Berenice (Jacquelyn Stucker). Of the LHF’s own list of seven of those who have gone on to “internationally recognised soloists”, only one was a first prize winner. And, over the years, I have also spotted several excellent singers in the semi-finals that don’t even make it into the finals. For that reason, I usually try to review the semi-final, but this year I went to both.

The 2019 Competition attracted a very impressive 170 applicants from 25 countries, a marked increase over last year. An initial selection round in February (for which media entries were allowed) led to a semi-final of 13 singers (Grosvenor Chapel, 5 March) and the final on 6 April in Handel’s own church of St George’s, Hanover Square. The semi-finals have with harpsichord accompaniment, and the final is accompanied by the London Handel Orchestra, conducted by the Artistic Director of the LHF, Laurence Cummings. This year the final included four singers.

The first to sing was the Transylvanian-born mezzo-soprano Eszter Balogh. As in her semi-final performance, she immediately created good eye contact with the audience and continued to involve us in the unfolding dramas of her three chosen pieces. She started with Where shall I fly!, the dramatic accompagnato from Act III of Hercules. With commendable English pronunciation and diction, well-articulated runs, a barely perceptible vibrato (that all but disappeared in the quieter passages), she used simple hand gestures and a range of facial expressions to express the guilt-ridden Dejanira’s distress. The gentler Figlio non … Cara speme, questo core ( Giulio Cesare in Egitto) demonstrated her excellent use of ornamentation (including a proper trill, rare amongst singers), and da capo elaboration. The aria also featured some sensitive cello playing from Katherine Sharman. Eszter Balogh finished with the showpiece aria Dopo notte, atra e funesta, again with an impressive treatment of the da capo. She had a good range with a consistent tone and excellent vocal agility and a fine sensitivity to the underlying text. I also liked the way that she acknowledged the orchestra at the end.

She was followed by British tenor David de Winter, who also opened with a dramatic accompagnato and aria, in his case Fatto inferno … Pastorello d’un povera from Rodelinda. As is often the case in Handel closely reflects the text in the mood of the orchestral accompaniment, which here reflects Grimoaldo’s inner torment of the ‘three furies’ of jealousy, disdain, and love. David de Winter portrayed the differing moods well, with a commendably stable voice, minimal (and controllable) vibrato, fine tone, and good engagement with the audience. The clarity of his diction was evident in The enemy said from Israel in Egypt, where The Lord goes in for one of his enemy slaying rants, de Winter’s military-style arpeggios of the short cadenza being a nice touch. His gentle final Descend, kind pity (Theodora) was a plea for reconciliation between factions, a nice anthem for the UK at the moment. He provided good da capo elaborations and occasional ornamentation.

British bass, William Thomas opened with Polyphemus’s blundering I rage – I melt – I burn from Acis and Galatea, where he was joined in the aria O ruddier than the cherry by James Eastaway playing a little recorder – the ‘pipe’ that Polyphemus made ‘for his capacious mouth’ during the initial recitative. Demonstrating a rich tone and impressive vocal range that Handel would have been proud of, not least with his low note at the words ‘capacious mouth’. He had rather more vibrato than the two earlier singers, but it didn’t interfere too much with intonation, diction or ornamentation – the latter, in any case, a little limited in quantity. Lead me, loathsome light (Semele) was a gentle interlude before returning to the dramatic with Racks, gibbets, sword and fire (from Semele) where the agility of Thomas’s voice was apparent. Unlike his semi-final performance, where he was rather static and generally looked straight down the central aisle, he engaged well with the audience, who applauded generously.

The final singer was American countertenor Patrick Terry. His programme started and finished quietly, leaving the fireworks for the central piece Crude furie degl’orridi abissi. Here he demonstrated a wide vocal range, well into the male soprano range, in the florid runs depicting the ‘savage furies from the hideous abysses’. As in his semi-final performance, he had a strong dramatic presence and showed a good acting ability. He opened with one of Handel’s loveliest arias, Yet can I hear that dulcet lay from The Choice of Hercules, and concluded with Mi lusinga il dolce affetto (Alcina). There was limited use of ornaments and da capo elaborations, although he included a dramatic high note in his cadenza. My biggest issue was his very strong, rapid, deep, persistent, and uncontrolled vibrato. This caused a number of intonation problems and interfered with the articulation of runs. His use of portamento was also a little out of keeping with the period style of Handel’s music – surely one of the key aspects of a competition devoted to singing Handel. 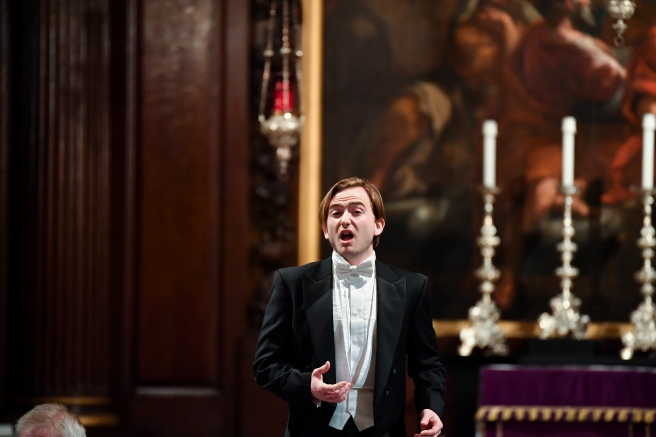 As is so often the case with this competition, there were a number of excellent singers in the semi-final that were not selected for the final. French mezzo Margo Aarsane had a real dramatic presence, facially expressive and with good audience contact. She got into the roles for her two pieces well. She has a strong voice, with good ornamentation and da capo elaborations. Her vibrato was a little strong for my tastes, but she showed that it was controllable on long-held notes. Soprano Stephanie Hershaw showed good acting ability combined with a clear tone, an agile voice, and good use of stylistic ornaments, although her runs could have been a little more articulate. The Italian mezzo-soprano Arlene Miatto Albeldas had a rich tone, a very slight vibrato, good eye contact with the audience, a good sense of timing and elegant use of hand gestures. The other semi-finalists were sopranos Irene Hoogveld, Alexandra Lowe, Myrna Tennant, mezzo Nian Wang, countertenor Justin Schütz, and baritone Cairan Ryan.

The panels of adjudicators for the final were Jane Glover (chair), Catherine Denley, Michael George, Rosemary Joshua, and Ian Partridge. For the semi-final, John Mark Ainsley and Lawrence Zazzo replaced Jane Glover and Rosemary Joshua. Jane Glover commented that the judges were looking the singers’ ability to sell the music, text and drama and the extent to which they ‘inhabited’ the music, together with the planning or their programme. She commented that the decision had been very tight. The prizes are
First: £5000, Second: £2000, and an Audience Prize of £300. The prizewinners were –

The four finalists are pictured below, with the festival’s Artistic Director and conductor of the London Handel Orchestra, Laurence Cummings. As well as well-chosen individual programmes, the flow of the twelve Handel pieces turned out to be a nice balance between drama and repose. It was rather nice to finish with a quiet piece. The London Handel Orchestra were on characteristic fine form, not least given the very limited preparation time they have with the finalists. 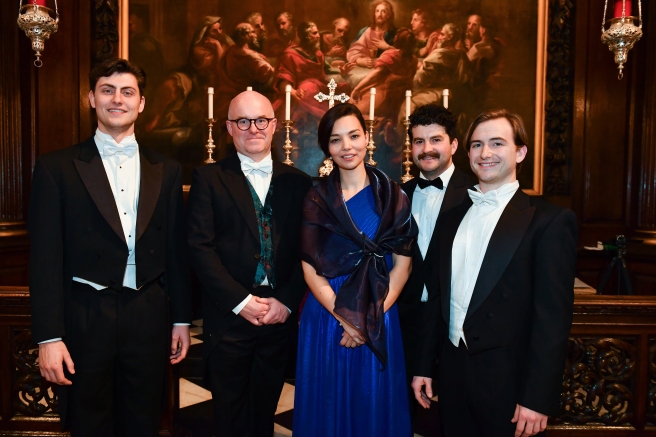