The Royal Over-Seas League (ROSL) has, since 1952, run an annual music competition through their ROSL ARTS, open to young Commonwealth classical musicians under the age of 30. A series of section finals for solo performers leads to a Gold Medal Final which, this year, will be held in the Queen Elizabeth Hall on 30 May. Past winners of the section finals and the Gold Medal have gone on to become well-known names. Alongside the section finals for solo performers (in wind & brass, voice, strings, and keyboard), are two ensemble finals, for strings and mixed ensembles. More than £75,000 is offered in awards, with a £15,000 first prize for solo performers and two chamber ensemble awards of £10,000. Winners of the solo sections receive £5,000 each. Details of the 2019 competition can be found here.

After an initial video round in January, successful performers go through a day-long second stage selection process at Over-Seas House, the London home of the Royal Over-Seas League and, the following day, an evening public recital where each gives a 20-minute performance. I attended the last of the six Section Finals, the Mixed Ensembles Section Final, with four groups competing for the £10,000 prize, and an appearance at the Gold Medal Final. The range of music offered was wide, with composer birthdates ranging from 1540 to 1989.

The first group was Improviso, a period instrument quartet founded in 2017 whose performances are based around an improvisatory approach to early music. They opened with improvised divisions on the bass-line of Pauls’ Steeple, from John Playford’s 1684 Division Violin, the interplay between the recorder and violin (Fatima Lahham and Elin White, pictured below) being particularly effective, not least in the high degree of balance between the two instruments. A Chaconne by the French composer Leclair gave baroque cellist Florence Petit a chance to shine, with several flourishes and variants on the bass line. Theorbo player Johan Lõfving offered some attractive linking passages in their final piece, Castello’s gloriously anarchic Sonata decima a 3, with its contrast of different moods and textures (in the stylus phantasticus) giving the impression of a mini-opera. They proved themselves fully immersed in the performance style of the period, with its emphasis on free interpretation and improvisation, and gave a very convincing and expressive performance.

The second group couldn’t have been more different from the specialist period instrument ensemble Improviso. The Hermes Experiment field the unusual combination of Héloïse Werner, soprano, Oliver Pashley, clarinet, Anne Denholm, harp, and Marianne Schofield, double bass. They perform their own commissioned compositions alongside arrangements and free improvisation and have commissioned works from more than 50 composers to date. They opened with Gareth Wood’s short To Morning from his Blake Canticles, followed by a commission from the groupFreya Waley-Cohen’s Delta Song from We Phoenician Sailors, with snatches of melody over a sparse accompaniment. Another commission was Stevie Wishart’s Eurostar: Between Cities in Sound a piece based on the sounds of a Eurostar train leaving Brussels which featured an extraordinary range of aural techniques from the instrumentalist and singer. They finished with Anne Denholm’s imaginative arrangement of Meredith Monk’s 1986 Double Fiesta, originally for two pianos and voice, its rhythmically strong instrumental background supporting the extraordinarily complex and virtuosic vocalising from Héloïse Werner (pictured below). One person I overheard during the interval opined that she had “never heard anything like it.”.

After a short interval, the recorder consort Palisander gave a reduced version of their Beware the Spider! programme, based on the curious 17th-century belief that the effects of a tarantula bite could be alleviated by music, resulting in several Italian dances with the title of Tarantella. This was early music on Renaissance and Baroque recorders, but presented as musical theatre, with a sequence of slickly choreographed dance routines. The four members of the group (Lydia Gosnell, Miriam Nerval, Elspeth Robertson and Caoimhe de Paor) took turns to introduce the pieces with contemporary descriptions of the effects of the spider’s bite and other medical oddities, including a suggestion that asthma could be cured by swallowing a frog greased with butter. They included a version of Vivaldi’s La Notte, under the title of ‘The Nightmare Concerto’, arranged by Miriam Nerval (pictured below left with Caoimhe de Paor) and a modern piece, Articulator V by Agnes Dorwarth, based on the vowel and consonant sounds that recorder players use as various articulation devices. 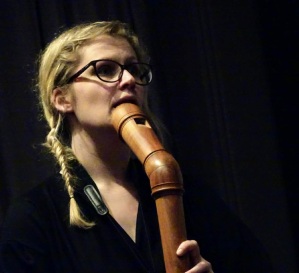 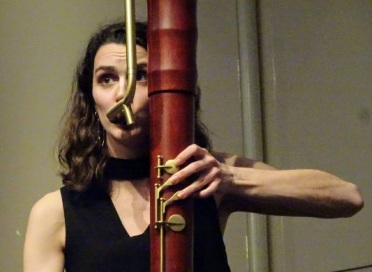 The final group was the Meraki Duo (Meera Maharaj, flute and James Girling, guitar) with a programme that to a certain extent filled the gap between the early and ultra-contemporary music heard so far. They started with the first two movements of Ástor Piazzolla’s Histoire du Tango: the lively Bordello 1900 representing the earliest incarnations of the Tango while Cafe 1930 features the later more melodic and mellow version, not usually intended to be danced to. They followed this with Miroslav Tadic’s Pajdushko the fourth of his Macedonian Pieces, with Meera Maharaj transferring to an alto flute (as pictured below) and featuring some busy guitar playing from James Girling. Chick Corea’s 1971 Spain (in the original Light as a Feather version) completed their set. It opens with the Adagio from Rodrigo’s Concierto de Aranjuez before setting off on a fast and furious variant of the theme and its harmonic structure.  They played with a fine sense of the momentum of the music.

The four-strong panel of adjudicators awarded the Mixed Ensembles Prize, and £10,000, to The Hermes Experiment. In doing so, they commented that they had been looking for excellent technical performance, programming and commitment, with a focus on how the groups presented the music, adding a warning that “it is not just entertainment”. The three unsuccessful groups were encouraged to reapply in future years – apparently many past ROSL winners have appeared more than once.