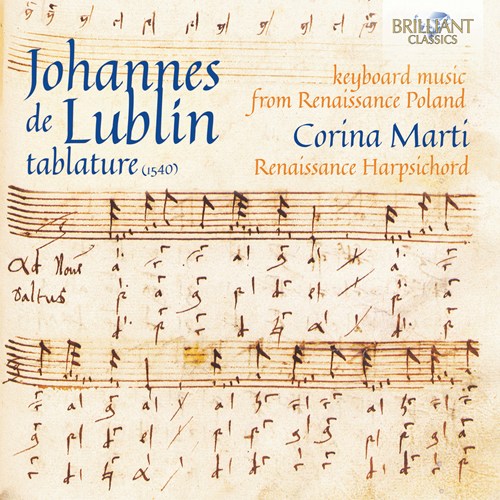 Little is known about Johannes (or Joannis, Jan) de Lublin (or ‘z Lublina’) was a Polish organist and composer. He was a Canon of the monastery in Kraśnik, near Lublin and seems to have graduated from the University of Kraków and remained there as organist in the Marian Church. He moved to Kraśnik, near Lublin sometime before 1540, when the Tabvlatvra Ioannis de Lyvblyn Canonic. Reglariv de Crasnyk was bound. The music in the collection was gathered over some years, an contains a wide range of music, both sacred and secular. It was intended as a primer for organists, and contains important information about organ tuning and the principals of composing a piece around a plainchant melody, something all organists were expected to do. It is the largest known organ tablature with more than 350 compositions and a theoretical treatise. It follows in the tradition of earlier examples such as the Faenza Codex and the Buxheimer Organ Book from the previous century.

Many of the composition are by Nicolaus Cracoviensis, another Kraków organist. There are also many examples of intabulations of vocal works for the organ. This manner of taking a vocal piece and adding linking passagework is now seen as one of the foundations of the modern day keyboard style. It was an essential skill for organists well into the 17th century. Examples of intabulations in the Lublin tabulature are based on works written by Josquin, Finck, Janequin, Senfl, de Sermisy, Verdelot, and  Walter, amongst others. This recording includes 39 individual pieces, only three of which last longer than 2 minutes. One is just 29 seconds long. They are sensibly arranged in five groups. No attempt is made to combine the liturgical works together in any meaningful group, although this would have been possible. And so, in each of the groups, we find improvisatory Preambulum, clearly intended to introduce a liturgical piece, followed by transcriptions of secular songs and dances. Some of the pieces date from well before the time of the collection, and come from many parts of Europe. It is interesting to ponder how they all came to be in Poland at the time.

Although it is clear that the collection was intended for organists, for some unexplained reason, Corina Marti has chosen to play them all on a harpsichord: a modern copy of a c1520 Renaissance instrument from Naples, about as far from Kraków as you could get. The original instrument is in Boston, USA. The use of a harpsichord is not entirely inappropriate, as keyboard instruments were relatively interchangeable in the early period, although I do wonder if the addition of a suitable organ (or, indeed, a clavichord, the more usual practice instrument for organists of the period) for several of the pieces would have given a more accurate indication of the way they were performed at the time. That said, Corina Marti’s playing is otherwise appropriate to the differing moods, and her choice of pieces and the groupings are well thought out. She plays with a fine sense of the improvisatory nature of many of the pieces while respecting the stricter nature of the polyphonic intabulations and the jovial mood of the dances.

Further information and download options can be found here.