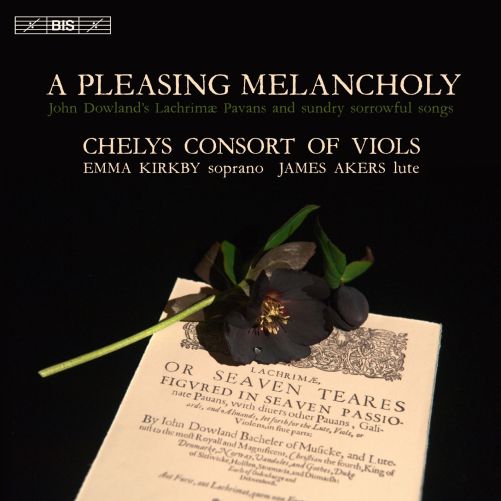 One of the concerts I reviewed during the 2018 London International Exhibition of Early Music was given by the  Chelys Consort of Viols with soprano Rebecca Hickey stepping in at short notice to replace the indisposed Dame Emma Kirkby. Their programme, and this CD, ‘A Pleasing Melancholy’, was built around all seven of John Dowland’s 1604 Lachrimae settings, interspersed with songs by Robert Jones, Tobias Hume, William Wigthorpe, John Danyel and Tobias Hume,. The title refers to a quote from Robert Burton’s 1621 Anatomy of Melancholy – “Many men are melancholy by hearing music, but it is a pleasing melancholy that it causeth“. My review of that concert mentioned that “a ‘pleasing melancholy’ it proved to be, with excellent playing by the five viol players of Chelys and guest lutenist Jamie Akers, and outstanding singing from Rebecca Hickey, who many will know from Stile Antico“. This CD is for those who were not at the concert, or for whom there really is nothing like a Dame.

Dowland’s 16104 Lachrimae collection is some of the most iconic repertoires for viol consort. It was written at a time when melancholy was the go-to emotion for those in Court circles, but it perhaps reflects aspects of his own life, caught up in the religious turmoils of the late Tudor and early Stuart era, not least a suggested plot against Elizabeth I. The collection is dedicated to King James I’s Queen, Anne of Denmark, and includes the epigram He whom Fortune has not blessed either rages or weeps. It was conceived when Dowland was in Denmark as a Court lutenist and was completed during a visit to England where he met Anne in Winchester. Dowland notes that  The teares which Musicke weeps can be pleasant; neither are teares shed always in sorrow but sometime in joy and gladnesse. The original piece, and the first of the set, dates from the 1590s and was included in Dowland’s 1690 Second Booke of Songs as Flow my Tears. It inspired composers from around Europe, with many examples of pieces based on it, including from composers such as Sweelinck in Amsterdam and Scheidemann in Hamburg.

Emma Kirkby sings with her characteristically compelling insight into the text, each word seeming to elicit its own specific vocal colour and texture. The playing of the Chelys Consort of Viols and their guest lutenist, James Akers, is outstanding, with an impressive cohesion of tone and a beautiful balance between all five instruments with none dominating, as can so often be the case with viol consorts. The recording acoustic, in Girton College Chapel, Cambridge, is attractive and retains a chamber quality of the sound. The comprehensive programme notes, by Ibrahim Aziz, are in English, German and French, although there are no translations of the words.