Of all Handel oratorios, the one that is probably most likely to put you off Christianity (or put you even further off Christianity) is Theodora. Set during the reign of the Emperor Diocletian, the story is of two love-struck Christians who refuse to honour the Roman gods, and then vie with each other as to which of them is to be put to death as a result, each insisting on taking the place of the other until the exasperated Valens, President of Antioch, has them both sent to their heaven. It was unusual for an opera or oratorio to end badly for the leading lights, which perhaps explains its lack of success at the time. The text doesn’t bear much scrutiny either, the earlier arias of the Christian contingent and their confidence that the Lord would provide protection ‘here and everywhere’,  and the chorus’s response that the Everlasting One was ‘Mighty to save in perils, storm and death’, seemed a little ill-judged in the forthcoming circumstances.   But, setting aside the silly plot, the text and music express aspects of love, religious freedom, bloody-mindedness, and the assumptions that Christians are far more musically intelligent than ‘heathens’. The latter is a particular feature of Handel’s music, with the choir switching between Heathen and Christian to distinctly different music, the former generally rather four-square, clumpy, and harmonically unadventurous, the latter tuneful and svelte.

More-or-less forgotten after its composition, its present-day revival stems back to a 1996 fully staged Glyndebourne production where the maverick opera director Peter Sellars, gave it one of his most successful present-day updatings, setting it within current religious persecution and featuring a gruesome extended execution scene. The cast included the late lamented Lorraine Hunt Lieberson and Dawn Upshaw. It was one of the pioneers of the practice of staging oratorio as opera. In the score and libretto, the death of Theodora (a noble-born Christian) and Didymus (a Roman convert) happens in a flash, ‘off-stage’ after they exit following their duet encouraging the ‘blissful holy choir’ to tune their lyres in readiness for their imminent arrival for their prize of ‘Heav’n, purity and faith’. Irene (Ann Hallenberg), Theodora’s sidekick, immediately announces in recitative that ‘their doom is past and they are gone’. For this concert performance, Louise Alder (Theodora) and Iestyn Davies (Didymus) suffered death by sitting down.

One of the interesting features of this performance was the subtle interaction between the soloists, and the sensitive aspects of staging so often overlooked in concert performances. Singers stayed standing while being sung to, or about, and generally looked at the person singing to, or about them. One example near the end of Part 1 even exceeded Handel’s ‘Exit Didymus’ instruction – on this occasion, Iestyn Davies sat on a chair at the corner of the stage to hear Irene and the chorus praise the ‘gen’rous, pious youth’. One performance oddity (possibly at the request of the BBC to allow for them to make a commentary for Radio 3 listeners) was the very long ‘tuning’ break at the end of Part 1, leading many to leave, thinking it was the interval. 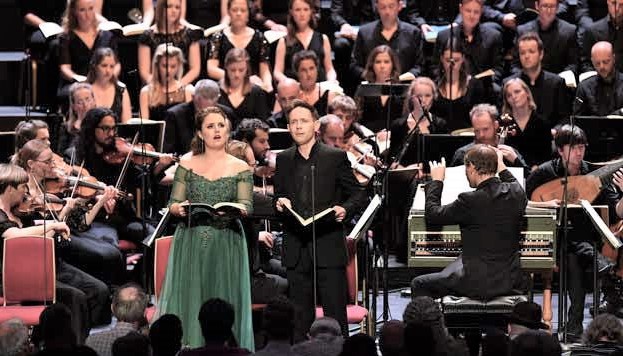 Ann Hallenberg was Irene, coping well with the florid runs in ‘Lord, to Thee each night and day’ and very nearly executing a proper vocal trill, although I found her vibrato excessive. The same trill and vibrato issue applied to Louise Alder, although she was rather more likely to rely on vibrato. But that aside, her voice was clear. Of course, the key soloist was inevitably going to be Iestyn Davies as Didymus, the clarity and focus of his voice being, as ever, exceptional, although he too seems to be developing more of a vibrato-laden voice over time. Because of that last factor, I actually preferred Benjamin Hulett’s singing as Septimius, his lyrical ‘Descend kind pity, being particularly attractive. He also had a far more successful attempt at a proper trill than others, and with far less vibrato.

I felt that the only weakness in the vocal soloists was Valens who, although he had an appropriate stature, lacked the vocal authority or gruesomeness of the baddie, sounding as though he would prefer to give his enemies a cuddle than ‘Racks, gibbets, sword and fire’. (although the BBC iPlayer recording gives him rather more presence that live in the hall). The 36-strong Arcangelo choir were generally very effective, although I was surprised at the amount of occasional vibrato from some of the sopranos for such a period-friendly group. Instrumentally, the stand-out successes were the two horn players, Ursula Paludan-Monberg and Martin Lawrence, first heard in full flow in the bouncy Heathens’ chorus ‘For ever this stands fix’d the doom’. Jonathan Cohen directed from one of the two harpsichords with sensitivity and skill, My only real surprise was the very subdued volume of the lovely little repeated 7-note string flourish in Theodora’s ‘With darkness deep, as is my woe’, a competition favourite, and one of many examples where Handel’s orchestration and instrumental accompaniment can be more memorable than the vocal melody itself.

You can hear the broadcast concert on BBC iPlayer for the next couple of weeks or so here.