A phrase that I occasionally use when reviewing a revival of music by a little-known composer is that the composer was “plucked from well-deserved obscurity”. That is a phrase that definitely cannot be used to describe the music of Louise Farrenc (1804-1875), the focus of the Barbican concert given, appropriately, on International Women’s Day by the Insula Orchestra, all wearing suffragette ribbons, apparently made by the same company that made the original purple, white, and green colours.  Born six months after Berlioz, she was a pioneering French composer, pianist, and teacher. Although she was highly esteemed during her lifetime, her impact was almost certainly reduced by not managing to write an opera, a requisite for Parisian composers in her time. Her work was almost entirely forgotten after her death until very recent years, when the long-awaited recognition of female composers and musicians led to some recordings and concerts of her composition.

Studying, working, composing and teaching at a time when the female contribution to arts, and life in general, was given little prominence, Farrenc resolutely ploughed her own course as a teacher and composer. At the time, females were not allowed to join the composition class at the Paris Conservatoire, so she took private lessons with the teacher. But she eventually became Professor of Piano at the same institution, remaining as such for 30 years, although only achieving parity of pay with her male colleagues for the last 20, and that after campaigning.

The period instrument Insula Orchestra was founded by conductor Laurence Equilbey in 2012. It is based in the Hauts-de-Seine, a Département just to the west of Paris, between the city centre and Versailles. They are resident in the striking new La Seine Musicale (pictured: architects Shigeru Ban & Jean de Gastines), sited, as the name suggests, on an island in the Seine, where they are responsible for selecting some of the events. 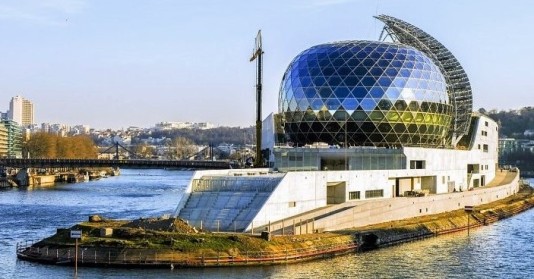 Members of the Insula Orchestra gave a pre-concert concert with two of Farrenc’s chamber pieces, the 1854/6 Trio in E-minor for Flute, Cello and Piano, Op.45, and the 1852 Sextet in C-minor for Piano and Woodwinds, Op.40, both introduced with considerable charm by flautist Anna Besson. The Trio is a delicate four-movement piece with a particularly attractive Andante. The Sextet is a meatier affair, with a distinctive tone colour. Anna Besson explained that the piano and flute were considered suitable for female performers in Farrenc’s time. The violin was out as it involved contact with the female chest, to the extent that it was suggested that women played with it resting on their knees. Playing any instrument that was put into the female mouth was definitely out!

The Farrenc piece chosen for the main concert was her 1847 Symphony No.3 in G-minor, Op.36 – a very impressive piece. It opens with a beautifully plangent solo oboe melody, the Adagio opening being a radical departure from the usual symphony opening of the time. Farrenc plays clever rhythmic games as the orchestra builds in speed and tension for a lively Allegro, with occasional returns to the opening mood. The Adagio cantabile second movement has a key role for the wind instruments, notably the two horns. It builds to a contrasting climax for full orchestra, accompanied by some martial wallops from the timpanist. The Vivace Scherzo has some wonderfully inventive orchestral colour, notably in the central Trio where the barely audible pitter-patter of the plucked violins accompanies the woodwind, sprinkling a bit of Mendelssohn’s fairy dust over some rather dark goings-on. This was one of many moments when Laurence Equilbey showed her consummate conducting skill. In so many situations I could easily find myself referring to the final Allegro as ‘masterly’, but that would be particularly inappropriate on this occasion. It is a brilliantly conceived movement, cleverly balancing moods and resolutely concluding in the minor rather than the more predictable major key. 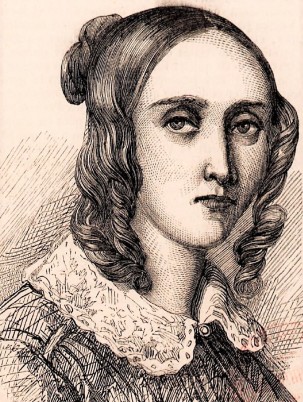 It is very tempting to look for contemporary influences on Farrenc and this Symphony. Yes, trace elements of Beethoven, Schumann, Mendelssohn and others pop up at times during this symphony, but not a trace of Berlioz. She mixes the intensity and occasional darkness of the former two, with the sprightly levity of the latter. I am tempted to refer to her as ‘Mendelssohn with balls’, but won’t. To me, Farrenc seems to be a genuinely distinctive musical voice, and one well worth exploring. Recordings of her 3rd Symphony can be found here; the Op.45 Trio for flute, cello and piano here, and the Sextet for Piano and Winds, Op.40, here with links to the following two movements. The Insula Orchestra own website includes this tribute to Louis Ferrence, and the Barbican programme for the concert can be read here.

It would have been appropriate if the first half of the concert had also been devoted to a female composer but, perhaps with a view to ticket sales, the choice went to Beethoven’s ‘Triple Concerto’ for Piano, Violin and Cello, Op.56, albeit with three female soloists and, of course, Laurence Equilbey the female conductor of Insula Orchestra. She has an excellent conducting style, clear and unobtrusive. She was particularly good at negotiating Beethoven’s link passages. Alexandra Conunova (born in the Republic of Moldova) was a very convincing violin soloist, calm and eloquent. Cellist Natalie Clein was the weakest link, her overly dramatic playing, tendency to try to drag the pulse, and bizarre facial contortions in sharp contrast to the control and restraint of her fellow soloists. By far the star of the performance was the frighteningly young Hamburg born pianist Elisabeth Brauss (23, pictured), making an outstanding contribution, carefully balancing volume and tone with her colleagues. Playing a sizeable 1882 Erard fortepiano (rather late for Beethoven), Brauss managed to control the beast sufficiently for the date not to matter – a remarkably professional performance from a musician to watch. 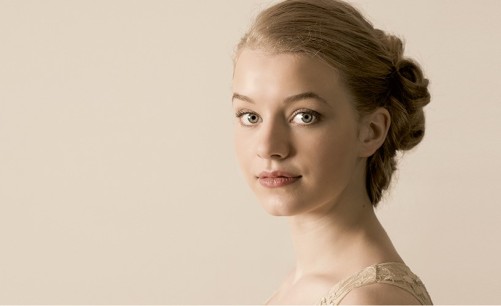 The encore was Daniel-François-Esprit Auber’s Le domino noir, in recognition of the composer’s assistance to Louise Farrenc in eventually obtaining parity of pay with her male colleagues. As with the earlier Symphony, it was introduced by one of the Insular Orchestras players, rather surprisingly not a female one, but nonetheless very eloquent. He explained the importance of present-day gender equality and the wish of the orchestra to move towards that although, on the basis of their very strongly male line-up on this occasion, they have some way to go.