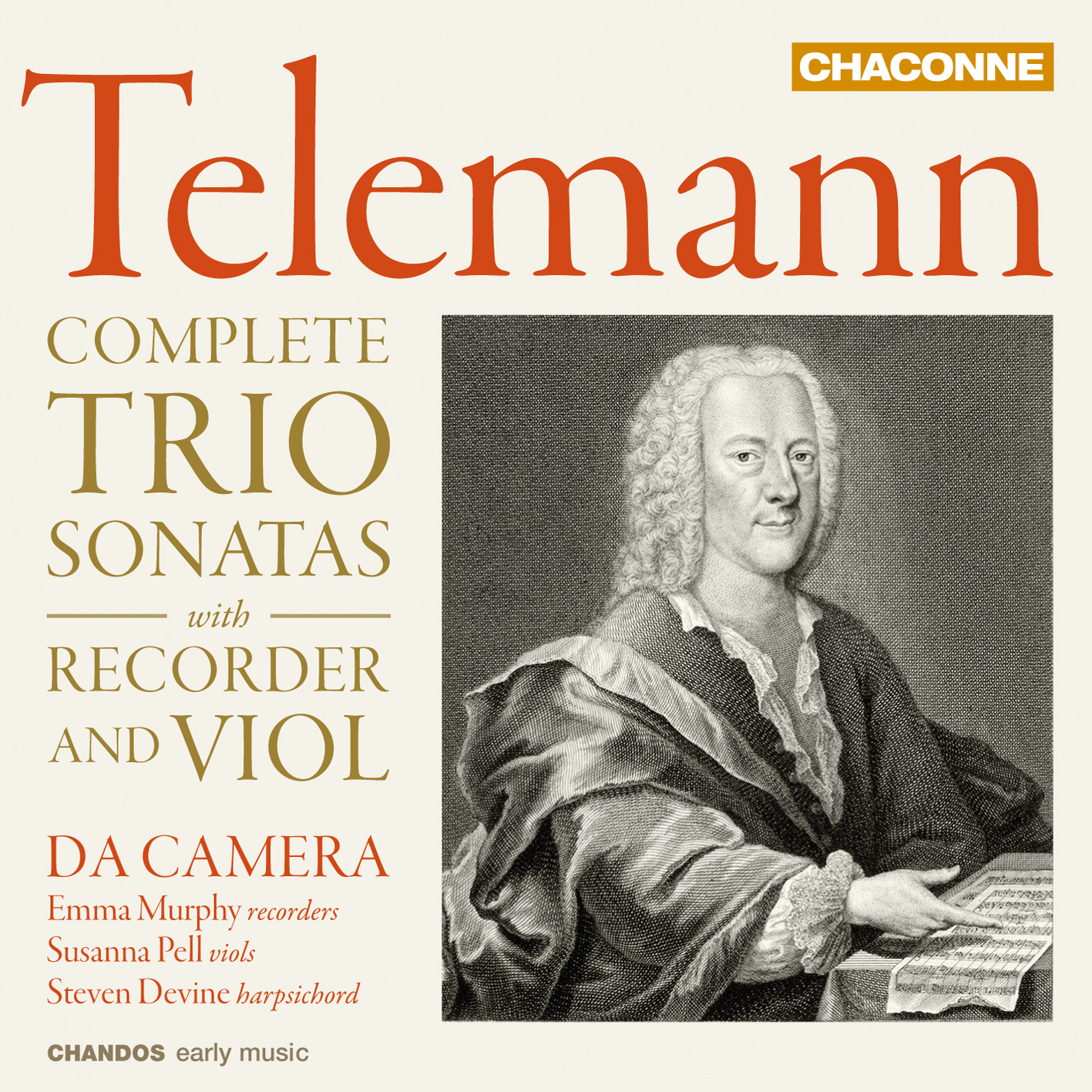 This excellent recording explores the compositions that Telemann considered to be his best – his Trio Sonatas. Da Camera (Emma Murphy, recorders, Susanna Pell, treble and bass viols, Steven Devine, harpsichord) performs eight such Sonatas, four from the 1739 Essercizii musici and four from the collection of Telemann manuscripts surviving in Darmstadt, mostly dating from the 1720s. The Darmstadt pieces are particularly interesting in that Da Camera use the combination of instruments specified by Telemann, with recorder and dessus de viole (treble viol), rather than the more usually heard combination of recorder and violin. Telemann’s indication makes perfect sense, the delicately expressive and sensitive sound of the treble viol both blending and contrasting perfectly with the recorder.

The CD programme is very well planned, with four sets of contrasting pairs of adjoining Darmstadt and Essercizii musici Sonatas, the former using the treble viol, the latter the bass viol, albeit often playing in the treble register alongside the recorder. However, in both cases, the viol is very much part of the Trio texture as an equal partner, whatever its pitch. My only very slight quibble with the recording is that the sound of the recorder is occasional slightly more forward and prominent than that of the treble or bass viol. Apart from one Sonata where a delicate voice flute is used (a curiously-named recorder sized between an alto and tenor), all the other pieces use an alto recorder, with its more sophisticated and temperate tone as compared to its smaller-scale siblings. One (No 8 of the Essercizii musici) adds an obbligato, rather than merely continuo, harpsichord to the texture, leaving the continuo bass to the viol. On this occasion, the harpsichord could have been given a slightly stronger presence in the recording, although on the other tracks the balance is excellent.

Breaking up the sequence of Trio Sonatas are two harpsichord solos from his Fantaisies pour le clavessin published in Hamburg in 1732/33. These wonderfully approachable pieces reinforce (in ABA form with a first movement reprise) and reflect the mood of unalloyed joy of the Trio Sonatas. Telemann skill at writing music for talented amateurs that covered an enormous range of musical styles and moods is evident in these Trios and Fantasies. Combining French, German, Italian, and Polish influences, his music is always attractively distinctive.

The playing from all the members of Da Camera is outstanding, the balance and interaction between them being spot on, notwithstanding the slight recording balance issues – almost inevitable when recording the recorder or any other high-pitched instrument. Emma Murphy uses tonguing and other articulation devices to define her melodic lines, while Susanna Pell makes the most of the wider range of expression possible on the treble and bass viol. One of the most exquisite tracks is the Largo of the Sonata in G minor (track 31), where the treble viol spins out a gorgeous melody against the recorder’s repeated arpeggio motif. Stephen Devine’s harpsichord continuo is both stylistically appropriate and sensitively restrained, while his two solo Fantasias range from delightfully delicate in the slow movements to appropriately jaunty in the faster ones.

Nearly 20 years ago, in 1999, I reviewed what might have been Da Camera’s very first concert (in Hampstead’s Burgh House), noting amongst other things that “… this is a group with a future”. Since then all three individuals have continued to advance their own impressive career and life paths but in recent years have made a very welcome return to performing and recording.

One thought on “Telemann: Complete Trio Sonatas with Recorder and Viol”