One of the surprises of the contemporary opera world is that the 2007 ENO premiere of Philip Glass’s Satyagraha broke all box office records, becoming the most popular contemporary work to be performed by ENO. Its uncompromising approach to text and music seems to have appealed to the public, to the extent that it has just opened for its third revival. It follows ENO’s 2016 revival of Akhnaten, the third of a trilogy of operas, of which Satyagraha is the second. It is a difficult work to categorise. It is not a conventional opera, sung throughout in Sanskrit without an understandable libretto, in a sequence of seemingly unrelated tableaux, in random time frames, each with its own musical timbre. Through-composed, it switches from lengthy solos and ensemble pieces to enormous chorus scenes, in this production backed by spectacular visuals. The orchestra only uses strings and woodwind. 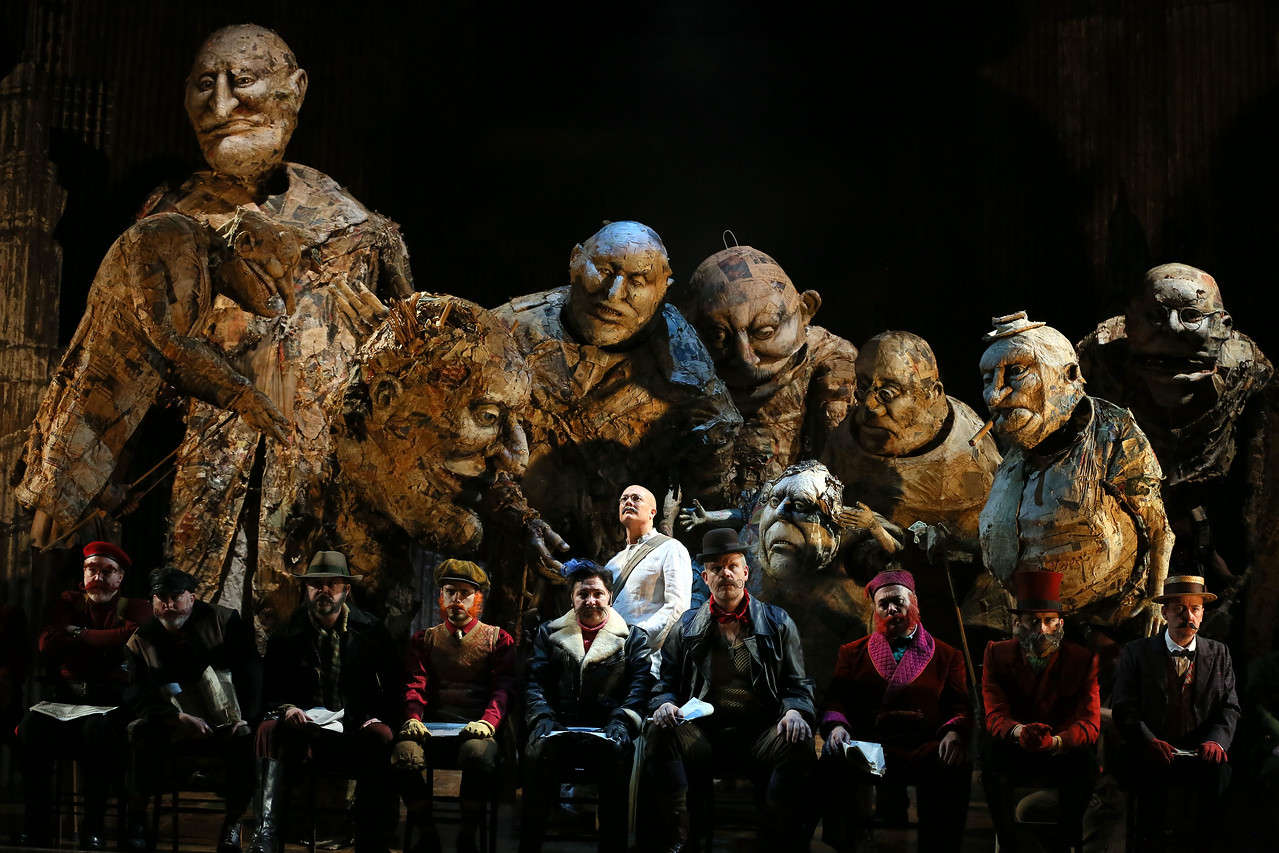 The three Acts are each based around a ‘spiritual guardian’ in Mahatma Gandhi’s early life in South Africa, with Tolstoy, Tagore and Martin Luther King Junior, representing the past, present and future of the ‘truth force’ of Satyagraha. These silent characters appear in raised peepholes at the rear of the stage. The first two acts have three scenes, each with a specific cast of characters – Act 1: The Kuru Field of Justice, Tolstoy Farm (1910), The Vow (1906); Act 2: Confrontation and Rescue (1896), Indian Opinion (1906), Protest (1908); while the third Act, the longest, is devoted to the Newcastle March (1913).

Although the programme gave the complete translation of the Sanskrit text, from the Bhagavad Gita, few if any of the audience would have been able to read it during the performance. Video images of fragments of the text and the scene titles were projected onto various bits of the text, including a wall of newspaper erected by the ‘skills performers’ of the theatre group Improbable. Their skills also extended to stilt-walking and manipulating the enormous paper mache puppets around the stage. It is a joint production with the Metropolitan Opera, New York, raising questions as to how on earth they managed to shift the enormous puppets and staging across the pond.

Refreshingly, the opera starts in complete silence – or, at least, as complete as the audience would allow. Then comes an extended solo from Gandhi, sung brilliantly by Toby Spence, and a duet with Prince Arjuna (Eddie Wade) to the simplest of orchestral accompaniments, based on simple repetitive triads contrasting occasionally by a brief scale. This formulation appeared throughout the opera, although the repetitions and the surrounding texture grew increasingly intense. The second scene’s trio featured the finest female singing of the entire work, with Charlotte Beament channelling Miss Schlesen, her clear and focused soprano voice soaring above the other two singers. Other singers who impressed were Clive Bayley as Parsi Rustomji and Andri Björn Róbertsson as Lord Krishna. 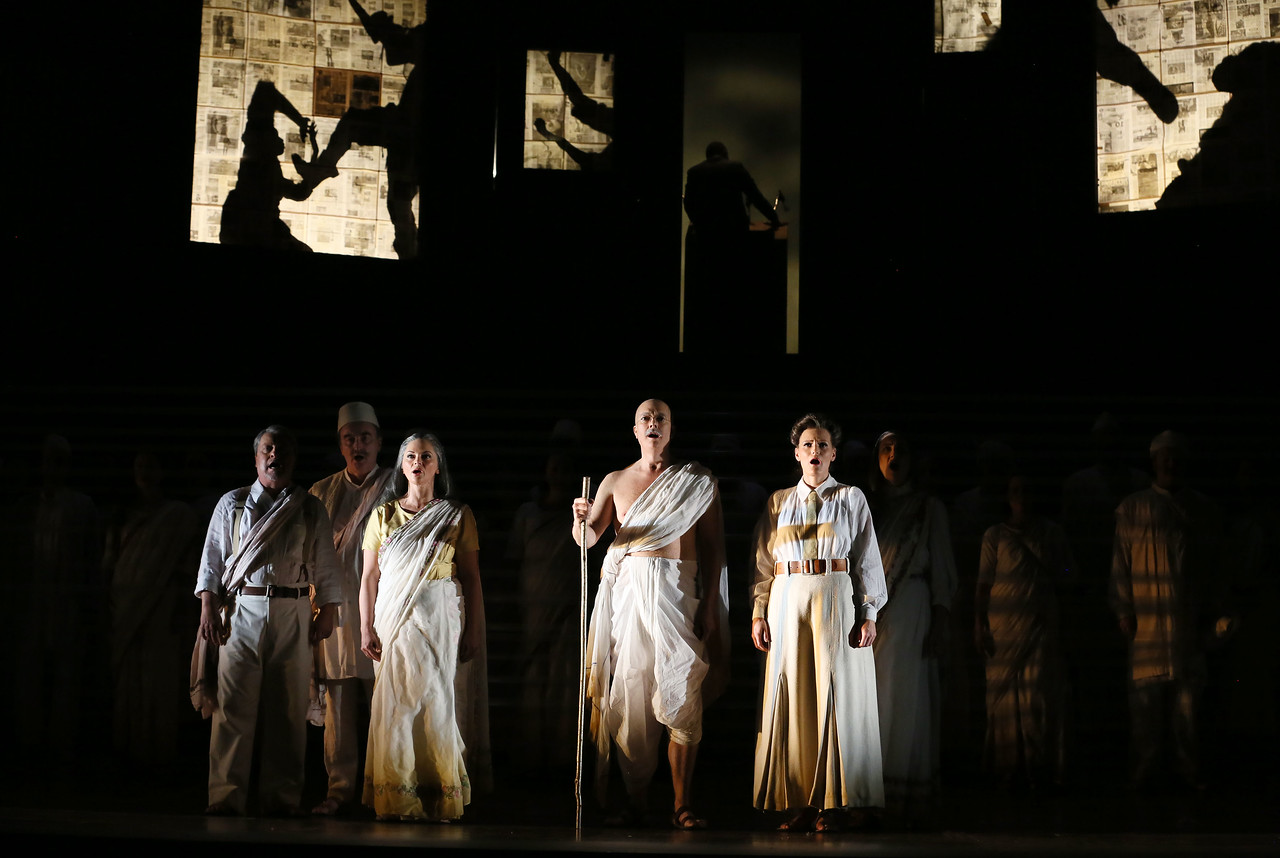 The direction by Phelim McDermott was spot on, aided by the spectacular set design by Julian Crouch. Newspaper played a big part, including one extraordinary moment in the Act 2 ‘Indian Opinion’ scene (Gandhi’s weekly newspaper) where the lines of newspaper that had been spread across the stage were gathered up into a living sculpture of moving newsprint at the back of the stage, at one stage engulfing Gandhi. Two other very effective moments came in the final Act, where an off-stage chorus added an evocative aural depth and an extraordinary web was spun across the stage, later to be wound up in ‘sticky-back plastic’ and eventually hoisted aloft.

Another undoubted star of the evening was conductor Karen Kamensek, who also conducted the 20116 ENO production of Akhnaten another collaboration between Phelim McDermott and Improbable. It is technically a difficult work to conduct (and, indeed, to play) but she dealt with the complexities magnificently, most of the time conducting the orchestra with her right hand, and the singers with her left.

It continues until the end of February. A video of a New York performance, using the same set and puppets, can be accessed below.