The Renaissance Singers were founded in 1944. They played an important part in the revival of interest in Renaissance sacred polyphony as the early music movement grew and developed. They continue under the musical direction of David Allinson. For this exploration of the music of Martin Luther and the early Lutheran Church, they were directed by Gawain Glenton. The anniversary of the founding of Lutherism was just a few days away from this concert (on 31 October), so it was a timely reminder of theimportance of music to Luther.

Appropriately, the evening opened with Martin Agricola’s four-voice setting (the first known) of the famous ‘Battle Hymn of the Reformation’, Ein feste Burg,  the chorale melody appearing in the tenor line. This was followed by a piece by Luther himself, his Wo Gott zum Haus. A fascinating series of pieces by Ludwig Senfl started with the 7-part Was wird es doch, musically intense and with a fairly innocuous text that ruefully ponders the state of the world. His Lust hab ich g’habt zur Musica is a lengthy autobiographical ramble through Senfl’s musical life (mercifully reduced to just two of the 12 verses on this occasion) and featuring some appropriate scale passages on the words ut re mi fa sol la. His Ach Elslein is a touching lament for a distant love, the first verse of which was sung by all the men, all of whom seemed to miss their dearest little Else. Mit lust tret has a complex polyphonic structure of interweaving voices suggesting a series religious text, but in fact is the welcome song of a minstrel who hopes to find a pretty maiden at a dance.

Reading the words became far more important in some of the other pieces, where similarly sacred sounding music expressed words that were considerably secular in nature – examples of the music that surrounded and influenced Luther. One such was the anonymous Ich klag mich seer, ich armes weib, in the style of a harmonised chorale, but actually a plea from a poor woman troubled by fleas in her bed and, more particularly, by the husband in her bed with his “bloody awful shoes . . . and breath that smells like a farm horse.” Lassus’s Fertur in conviviis, also sounded like a Lutheran chorale, but was actually a paean of praise for wine, the tavern (where the protagonist planned to see out his days), and drunkards, who are heralded by the concluding chanted Requiem eternam. The ‘bumkins’ who do not drink wine were musically depicted in a series of medieval-style parallel fourths.

As well as accompanying several of the choir pieces, Silas Wollston played a couple of organ solos, starting with Christian Flor’s Prelude on Ein feste Burg with the florid upper voice floating above a rather archaic choral-like foundation. Bach’s little-known (and, indeed, little) prelude on Christ unser Herr zu Jordan kam (BWV 685), hides the chorale theme amongst flurries of semiquavers and trills.

The second half built towards a musical climax with extracts from Christoph Bernhard’s Missa Brevis super Christ unser Herr zu Jordan kam, preceded by the chorale and succeeded by the Bach organ prelude. Johann Michael Bach’s double choir funeral motet Halt, was du hast is a cleverly constructed dialogue between two choirs, one weaving complex musical lines around the chorale verses of the other choir. Schütz wrote his Die Himmel erzählen die Ehre Gottes for Luther’s 100th anniversary, his music, like that of Pachelbel, showing the increasing influence of Italian music on German composers. Naturally, the evening had to end with Bach, in this case, his Der Geist hilft unsrer Schwacheit auf,  a surprisingly upbeat motet commissioned for the funeral of the headteacher of the Thomasschule and the cause of some concern for Bach during his tenure.

The quality of singing of the amateur Renaissance Singers always impresses me, and did so again. Gawain Glenton prepared an excellent and informative programme and directed with musical sensitivity. 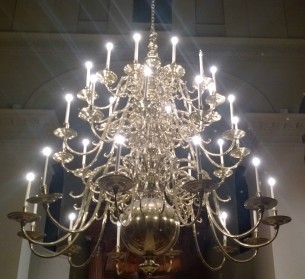