A combination of Handel, the Orchestra of the Age of Enlightenment, and William Christie is bound to sell out the vast auditorium of the Royal Albert Hall, but the first performance of Handel’s Israel in Egypt, in 1739, was not so successful. Many stayed away because of the biblical context of the work, and those that came were not overly impressed. The reasons are complex, but are generally to do with Handel’s move from opera to the new musical form of oratorio. The slightly earlier oratorio Saul, written just before Israel and Egypt, was a great success, no doubt because the musical style included more elements of opera. Israel in Egypt was far more hard-core, not least in the use of choruses. The first part, nearly always omitted in present day performances, is a continuous sequence of 12 choruses. Part Two has 7 and Part Three 8, but these are broken up by a few arias, duets, and recitatives. Handel made many subsequent changes to the score, and it is usually now performed in the 1756 version, with its odd recitative start (which refers back to the non-existent Part One) and no Symphony. It was the inclusion of Part One, and what was supposed to be (but I think was not quite) the original 1739 version, that made this Proms performance so special.

The first part, a lament on the death of Joseph, is a reworking of Handel’s 1737 funeral anthem “The Ways of Zion do Mourn,” composed on
the death of Princess Caroline, with new words added to the music, not always with the most succesful word underlay. The short and sombre Symphony was, on this occasion, but I think not originally, heralded by a military drum solo. It segues into ‘The sons of Israel’ in the form of the sort of large-scale chorale fantasia that Handel must have been familiar with from the organist composers of his youth in Germany. The jagged rhythms of ‘How is the mighty fall’n’ leads to the first of many fugues, many of which were sandwiched within homophonic sections in the manner of the organ Praeludia that Handel would also have known from his youthful days as an organist. The following chorus, the much lighter ‘When the ear heard him’, produced my first soprano compliment and complaint, the former for some impressive massed trills, the latter for a little too much vibrato from somewhere within the ranks – both aspects that continued throughout the evening.

The following chorus, ‘He deliver’d the poor’, was magical, not least for the tiny soprano solo ‘Kindness, meekness and comfort’, sung a capella from within the choir by an un-named soloist who I now know to be Jessica Cale. I guess this is the place where the singer at the first performance is merely referred to as ‘The Boy’. Jessica Cale’s voice certainly reflected that, as well as, for my tastes, a particularly good ‘early music voice’ of the sort that carries so well in the vast acoustic of the Royal Albert Hall. You can find it around 20 minutes into the BBC broadcast that can be heard for around 30 days on BBC iPlayer here.

Here, and in the other two parts, William Christie negotiated the lengthy sequence of choruses by segueing several together, and accenting the dramatic moments, of which there were many. One was the contrast between the hushed a capella ‘Their bodies are buried in peace’ with the following burst of ‘but their name liveth evermore’. His pacing of the sotto voce Part One concluding chorus was superb, as the sound died away to almost silence (from around 45 minutes in on the broadcast).

Part Two (Exodus) includes Handel’s jovial depiction of the plagues of Egypt, combined with choruses of praise to God for causing such mayhem and death. Amongst the plethora of choruses came the jolly alto aria depicting the frogs hopping and skipping their w 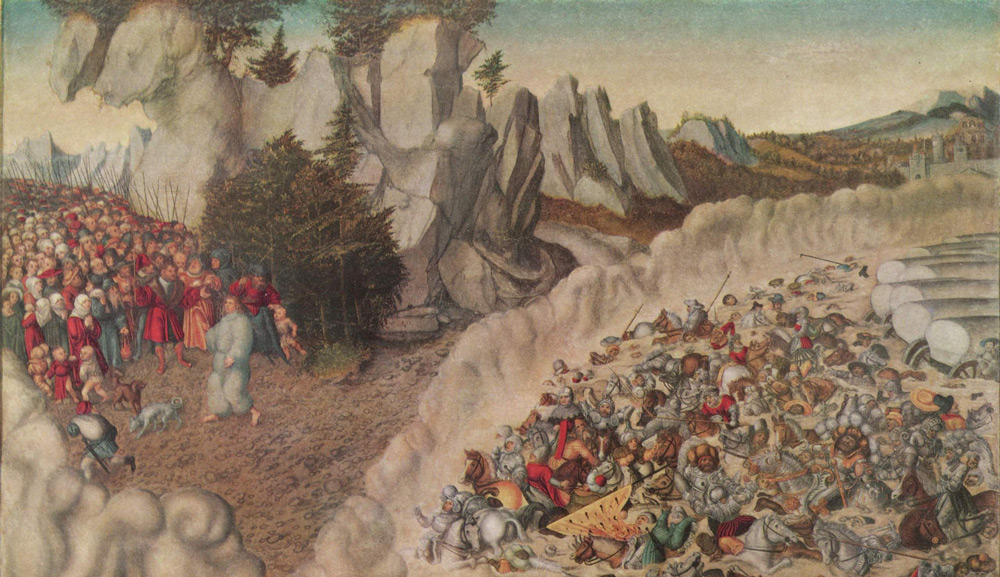 ay, ‘yea, even into the king’s chamber’, as ‘blotches and blains broke forth on man and beast’. The three trombones, a particularly effective part of the evening’s sound world, first made their presence felt in the chorus ‘He spake the word’, although the oddly over-emphasised pronunciation of the word ‘flies’ was a bit of a diversion from the seriousness of the occasion that sent giggles around the Proms audience. The trumpets and timpani joined the fray for the arrival of the hailstones, while the two bassoons heralded the ‘thick darkness’ of the following chorus. immediately after God smites all the first-born of Egypt comes a very curious soprano aria which I am guessing might have come from a slightly later version than the original. The soppy words about nature’s blooming made absolutely no sense set between the death and destruction of the surrounding choruses.

The orchestral colouring generally came from blocks of instruments, notably the three distinctive trombones of Philip Dale, Charlotte van Passen, and Patrick Jackman and the oboes and bassoons, with no solos to speak off, apart from some impressive timpani flourishes from Adrian Bending. As is so often the case in performances today, the little box-like chamber organ was woefully inadequate, particularly considering the scale of the two organs that would have been used in the original performances – which, incidentally, also included two full-length organ concertos which Handel performed during the intervals, including the famous ‘Cuckoo and Nightingale’. This was particularly noticeable at the start of the chorus ‘And Israel saw’ which started with a particularly weedy and shrill yelp from what I assume was full organ.

The final part (Moses’ Song) praises God for throwing horses and riders into the sea and generally dashing people to pieces – it clearly paid to be on the right side during Old Testament times. It includes several moments for individual singers and duets, of which Jeremy Budd and Callum Thorpe were the most effective. The final chorus includes another delightful a capella soprano moment, this time from the excellent Zoë Brookshaw, in ‘Sing ye to the Lord’, taking the role of Miriam the prophetess with her timbrels and dances’.

Despite the splendour of the performance and the attention to detail of William Christie and the assembled forces, I came away with a feeling that this was not perhaps Handel’s finest creation. Indeed, much of it isn’t really Handel’s creation at all, as he borrowed much of the music from other composers. I certainly detected a degree of restlessness amongst the audience during the Part Three, and there were several early leavers. But, to counter that thought, an OAE player who I briefly chatted to at Clapham Junction station said that she loved it, and she would have lived with it for longer than me.

Apparently this was the launch of a series of Handel oratorios to be performed over the next five seasons at the Proms.