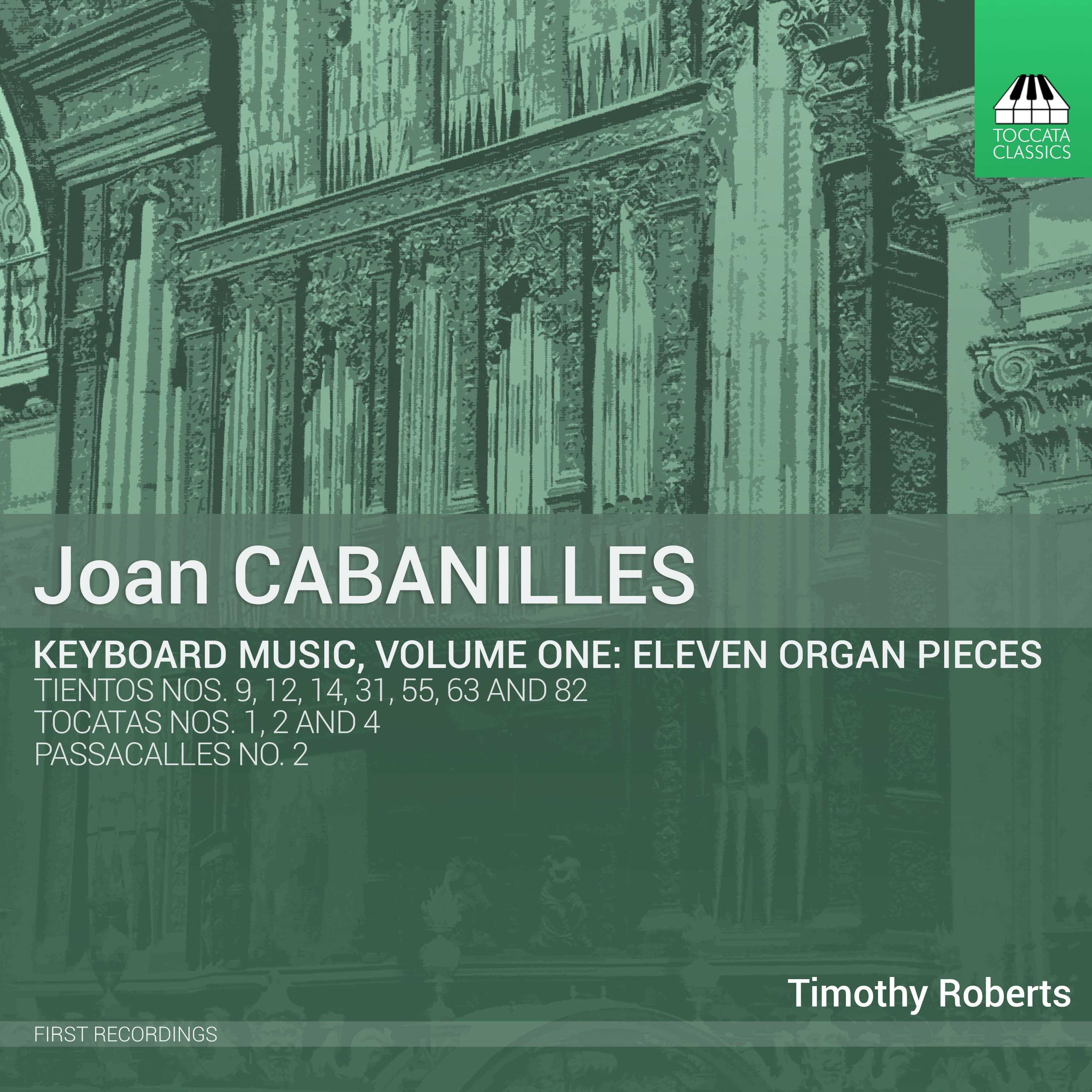 Joan (more usually spelt as Juan) Cabanilles (1644–1712) is a curious composer. His compositions fully absorb the late Renaissance counterpoint of the earlier, and better known, Spanish organ composer Francisco Correa de Araujo (1584–1654) but apply to that foundation layers of often virtuosic Baroque figuration that can range in style from the simplistic to the frankly perverse. He was born in Valencia, and seems to have remained there throughout his life, engaged in little more than the usual activities of a priestly musician in a cathedral city. He was organist of the cathedral, but doesn’t seem to have ever become the cathedral’s musical director. Although he composed a vast amount of organ music, it was not published in his lifetime and none of his original manuscripts survive. His music only exists in copies, of varying degress of accuracy, most now housed in the Biblioteca de Catalunya in Barcelona. The Biblioteca began a problematical complete edition in 1927, which remains incomplete to this day.

Cabanilles’ pieces were often arranged for the typical one-manual Spanish organ with stops dividing between middle C and C#, allowing for bass and treble solos. But, as Timothy Roberts discusses in his notes, it seems likely that Cabanilles originally wrote for the two-manual organ in Valencia Cathedral. Roberts takes advantage of the two-manual organ in Sant Jaume, Vila-real to adjust some of the solo lines to descend into the otherwise impossible lower register. Other editing decisions arise from the poor state of many of the copies, which are often full of errors. Roberts acknowldges the pioneering work of Andrés Cea Galán in analysing these pieces and suggesting reconstructions.

A rather inconsequential opening Tocata de primero tono is followed by Cabanilles’ best-known, and possibly finest piece, the Passacalles de primero tono, perhaps not originally intended for organ. It is followed by one of his silliest pieces, the bombastic Tocata 4 de quinta tono, with its rapid repeating notes suggesting (to me, at least) that it might possibly once have formed part of a Batalla. This contrast in musical style and compositional ability continues throughout the CD. Cabanilles often resorts to  rather lengthy and unimaginative sequences, but balances this by occasional flashes of brilliance and harmonic intensity. One example of this combination is the Tiento lleno 5° tono Por Bequadrado (track 6, pictured).

It is not known where Cabanilles’ musical influences came from, but there are many hints in this piece, and others, of the Italian music of Frescobaldi and his much-travelled disciple, Froberger. The opening section demonstrates written-out ornaments that Frescobaldi would be proud of, while the rather anarchic triple time concluding section is straight out of Froberger.

Some of the most attractive pieces are the more restrained ones using divided register. These include track 4, the moving Tiento 12 de falsas, de cuarto tono, and track 7, the Tiento 9 partido de mano derecha, de secondo tono, the latter approaching the sublime sensitivity and musical integrity of Correa de Arauxo’s Tientos, published 18 years before Cabinilles’ birth. Unfortunately, any comparison between Cabanilles and Correa does the former no favours. One example of this is to compare the concluding track on this CD, the Tiento 14 partido de dos tiples, de cuarto tono with Correa’s magnificant Tiento de medio registro de dos tiples de segundo tono. The latter’s extraordinarily evocative intertwining voices conjure up images (perhaps of the Moorish musical history of Saville) in a way that Cabanilles’ rather tame Tiento never approaches.

Timothy Roberts’ playing is musically sensitive, with a good sense of the touch and articulation that is so essential when playing organs built in historic style.  Only occasionally does he add some of the copious ornaments requested by many Spanish organ composers (for example, in track 11), and he generally avoids the complex rhythmic note alterations that Spanish composers of the period mention. These include an instruction to ‘occasionally play the notes as written’, suggesting a very irregular way of playing runs of notes. Triplets, for example, were requested to be played in a very specific manner by Correa de Araujo, albeit about 20 years before Cabanilles was born. Whether or not composers in different parts of Spain adopted similar performing conventions is, of course, open to conjecture. Roberts applies his own style of rhythmic irregularity, heard for example in the melodic line of track 5, the Tiento 31 partido de mano derecha, de primero tono. Whether or not such rhythmic flexibility adheres to the instructions of the time, or are the result of a modern day performers’ instincts in the moment, is neither here nor there. Either way, this rather free manner of playing is essential to make sense of the endless of flow of semiquavers that Cabanilles often employs.

The numbering of the pieces in the CD notes is the rather random and inconsistant one used in the out-dated publication edited by Hyginii Anglés and José Climent, rather than the WSC numbering system used in the William R Shannon edition. The Shannon edition is readily available on the internet and references to that edition would have allowed listeners to see a score of the pieces. For a recording that purports to help bring a ‘fuller knowledge’ of Cabanilles, that is unfortunate. A rather complicated concordance between the various editions and numbering systems, along with incipits of the pieces, can be found here. The reference numbers used in this recording are in the 5th column ‘T’ and the Shannon edition numbering is in the 1st column  ‘WSC’. Clicking on the 4th column should take you to the score of each piece, in Shannon’s edition.

The organ pictured on the CD cover is that of Cabanilles’ organ in Valencia Cathedral, destroyed during the Civil War. The organ used for this recording (pictured) is the restored

1724 Nicolás Salanova instrument in Basilica of Sant Jaume in Vila-real, north of Valencia, and is of as much interest as the music. Historic Spanish organs are rarely in a good state of repair, so a reconstruction of an historic instrument is to be welcome. Little survives of the original Nicolás Salanove 1724 organ. All the pipework was melted down during the Civil War, and the case and internal workings (soundboards, windchests and action) only survived in a very poor state. Gerhard Grenzing’s 2010 reconstruction uses as much of the original material as possible but is essentially a new instrument, albeit based on the 1724 original and similar surviving organs in the region. The CD notes include the stop list, and it can be also be found here. Unfortunately registrations are not provided in the CD notes. They would have been useful, if only to aid understanding of the complex divided manuals of the Spanish organ. This can include such apparent oddities as having a 16′ reed as a treble stop and a 2′ reed as a bass stop. The organ is positioned high on the side wall of the rather confined altar apse, but the sizeable acoustic of the Basilica adds an attractive warmth and bloom to the sound, as well as a sound delay of around 6 seconds.

Perhaps as a result of this sound delay, some of the gaps between tracks are too short, a new piece starting before the sound of the final chord has died away, as happens between track 9 and 10. As well as playing, Timothy Roberts also recorded, produced and edited himself, and also wrote the CD notes. It sounds as though it was recorded from fairly close to the instrument, if the reassuring little clicks of action noise are anything to go by.

The organ is tuned in sixth-comma meantone temperament, which should make most of the usual major thirds almost pure. That said, there is a distinct temperamental edginess to the opening piece (notionally in a ‘pure’ key) with rather unsettling D major final chord. But the purity of the tuning is certainly evidend in most other pieces, particularly so in the stillness of held chords. The pitch is A=380Hz, more than a tone lower than modern A 440 pitch.

Roberts’ contention that Cabinilles is ‘Spains’ greatest Baroque composer’ is perhaps open to discussion, but he is certainly a composer worth getting to know, as are several of his contempories. As well as the music of Francisco Correa de Araujo (1584–1654) already mentioned, it is worth exploring the music of Sebastian Aguilera de Heredia (1561-1627) and Pablo Bruna (1611-1679), amongst others.  This is the first of an ongoing series of recordings of Cabanilles’ organ music, although whether it will form a complete edition is doubtful as he left around 200 Tientos, plus around 1000 shorter liturgical and plainchant-based pieces. For future releases, the choice of pieces will be important. There is much fine music to be heard, but also a lot that perhaps deserves its current obscurity.