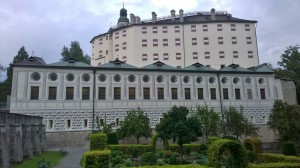 aning to hoodwink him and make off with his money and her actual lover, an alleged Baron, Giambarone. For this performance, the three characters were sung by soprano Robin Johannsen, bass Federico Sacchi and tenor Franscesco Castoro, with direction from Christoph von Bernuth. The orchestra was the ten-strong Academia Montis Regalis, conducted from the harpsichord by the festival director Alessandro De Marchi.

Each singer gets a couple of solos and there are a couple of trios and a duet – the rest is recitatitive. Although the Don appeared far too young for his role, and the young upstart rather overdressed for his, the three singers explored their characters well, combined with some excellent singing and good acting. Full use was made of the wide space of the Spanischer Saal (under the gaze of some 27 Hapsburg rulers of the Tyrol), including a side room from which wafted the beguilingly distant sound of soprano, oboe and organ as an extra-curricular start to the second act. The comedy routines were not restricted to the three singers – the oboeist and keyboard player came scampering back to their seats, as if they have been caught moonlighting during the interval of gig.

The following evening’s concert (21 August) took place in Wilton Abbey, an enormous monastic foundation just south of the current centre of Innsbruck, but actually part of the early foundation of the city. The Balthasar Neumann Choir & Ensemble were directed 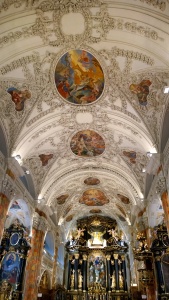 by Pablo Heras-Casado in their programme Das Hohelied der Liebe with motets based on the biblical Song of Songs) by the three North German Praetorius’s, the father and son Hieronymus & Jacob and the unrelated (and better known) Michael. The 16 singers and 14 instrumentalists made an outstanding sound in the generous acoustics. Half of the pieces performed were by Hieronymus Praetorius, a well-deserved focus on a composer that was fundamental to the development of the North German organ and vocal composition school of the 17th century. The evening opened with one of his spectacular Magnificats, the different verses contrasting different vocal and instrumental groupings and a range of polyphonic compositional techniques, the whole culminating in a joyously bouncy conclusion. Another Magnificat by Michael Praetorius came later in the programme, through composed, rather than in alternatim form. Another spectacular Hieronymus Praetorius piece was Tota pulchra es, with three four-part choirs, the singers widely spaced across the width of the nave. The only disappointment was the use of a tiny box chamber organ, producing a very different sound to the massive west-end church organs that would probably have been used to accompany such music at the time.

The festival’s occasional lunchtime concerts in the semi-enclosed Hofgarten pavilion feature younger professional musicians, on this occasion (22 August) the five-strong Mozarteum Baroque Collective. Their typically international mix of personnel included England, Taiwan, Germany and Russia. They met and formed their group, as the name suggests, in Austria, and play recorders, bassoon, viola da gamba and harpsichord. Their pr 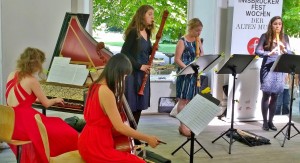 ogramme was the appropriately named Les Nations with music from England, Italy, Germany and France. The Hofgarten pavilion is not an easy space to perform in. It is open on all four sides, with the normal park activities going on just outside the open window spaces. On this occasion, it was a relatively quiet atmosphere, although the usual plane disturbed proceedings briefly – the flight-path of Innsbruck airport is directly over the cities historic centre. There are never enough seats for the audience, and those that there are commandeered by an array of coats well before the start, leaving most people standing or sitting on the floor at the back with occasional passers by stopping to listen outside.

Each player had the chance to display their particular wares, but key solos came from viola da gamba player Shen-Ju Chang in Purcell’s Chacony and John Cutts’ Prelude with its wide leaps, multiple-string chords and intonation-testing ventures well above the frets.

Harpsichord players are often restricted to playing continuo, with the occasional small solo to give the others a rest, so it was good to see Anna Kiskachi (left) completely steal the show in her virtuosic performance of two pieces by Forqueray, moving from the small Italian to a larger two-manual French harpsichord for the occasion. This really was a show-stopping performance, full of dramatic and well-timed pauses.

The annual BarockOper:Jung production is supposed to be made up from finalists from the previous year’s Cesti baroque opera singing competition (and availability for the following year is written into the competition entry rules) but in recent years the link has become rather tenuous, with key winners missing – although one from two years ago (Emilie Renard) made up for it by being booked for the fully-staged ‘senior’ opera of this year’s festival, Porpora’s Il Germanica. This year only two of last year’s finalists were included in the seven-strong cast (Daniela Skorka & Miriam Albano), together one singer who I liked in the earlier rounds but who didn’t get through to the final (Pietro di Bianco). Last year’s first, audience and second prize winners (Rupert Charlesworth & Giulia Semenzato) were absent.

This year’s opera was Lully’s tragédie en musique Armide, a new venture for Innsbruck into the distinctive style of French baroque opera. With a confidence in Innsbruck’s erratic summer mountain weather that is nearly always justified, performances take place in the open courtyard of the Theology Faculty of Innsbruck University, appropriately housed in an enormous former monastery. Armide was first performed in Paris in 1686, and has libretto based on Tassos La Gerusalemme liberate. At the time, it was regarded Lully’s masterpiece. Unlike many French operas of the time, the focus is on the developing psychological character of a single character, the sorceress Armide (rather than the hero of the original story, the crusader Renaud) and her tussles between vengeance and love. Armide has used her magic spells to entrap Renaud but her original intention of killing him in his sleep turns to falling in love with him. As it is not reciprocated, she casts a spell to encourage him love her in return. Upon reflection, she decides that Renaud’s love shouldn’t have been achieved through spells, so asks the Goddess of Hate to restore her hatred for Renaud – unsuccessfully, as the Goddess condemns Armide to eternal love. Eventually, two of Renaud’s fellow soldiers manage to break Armide’s spell, enabling Renaud to escape. Armide is left in a pretty bad state.

The Prologue was sensibly omitted and the five acts combined into two halves.  The opening featured three sopranos singing from the windows of the monastery, with Armide’s confidents (Daniela Skorka as Phénice and Miriam Albano as Sidonie) congratulating her on her triumph over the crusaders, while Armide bemoans the fact that Renaud remains at large. The role of Armide is an extremely complex one, demanding outstanding skills in acting and singing as the character evolves throughout the opera in a wide variety of musical styles. Soprano Elodie Hache was well up to the task, demonstrating an ability to represent an extraordinary range of emotions. She was also an excellent singer, not least for her ability to sing a proper Baroque trill rather than just rely on vibrato.

The key moment come in Act 2 as Renaud (tenor Juao Pedro Cabrai) falls asleep and in an extended recitative (Enfin, il est en ma puissance), Armide changes from thoughts of murder and vengeance, to increasing feelings of love and passion for her captive. The role of the varying orchestral colours is also crucial to this moment. The six members of the Nordic Baroque Dancers wove through the singers throughout the evening, with very impressive choreography by the opera’s director Deda Cristina Colonna. Many of the cast had to wear some extraordinarily elaborately decorated helmets that must a taken as long to get use to wearing as they did to construct.

Patrick Cohën-Akenine conducted the 11-strong Paris-based group Les Folies Françoises, the string instruments copies of those of the Versailles Vingt-quatre Violons du Roi and featuring such rare examples of the violin family as the haute contre, taille and quint de violin, the latter the size of a small cello, but played in violin style from the shoulder. It was clear that both players and conductor are steeped in the French baroque tradition. Deda Cristina Colonna directed the whole production and also choreographed the Nordic Baroque Dancers. Although clearly intended as a training opportunity for young singers, there is nothing unprofessional in the standard of singing and acting, or in the production. This compared with any of the world-class opera houses, although the latter are unlikely to feature a couple of low-flying planes and a helicopter.

My last evening in Innsbruck (23 August) featured something of a spectacular in the Jesuit Church with the Trompetenconsort Innsbruck and their programme Im Reich der Trompeten. They started somewhere in the bowels of the west end of the huge church, playing Bendinelli’s Sonata 336 in their arrangement for 24 trumpets, bass-trombone and 4 drums. What it lacked in harmonic or musical interest it more than made up for by sheer effect, and the massed forces gradually got louder until they ascended to the rear galleries of the church. The rest of the evening contrasted the sound of the trumpets in various combinations and in various locations with the gentle sound of a harp (Margret Köll) and two lute/theorbos, played from one of the side chapels of the nave, and a couple of organ solos. The church was dark, the location of the trumpeters indicated by lights going on and off in the galleries around the church. The composers included Biber, Viviani, Pezel, Kapsberger, Schmelzer and Frescobaldi.

Information about the history of the festival can be found at here. Next year’s festival will be the 40th. Tickets go on sale in November.