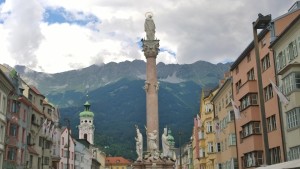 The 6th incarnation of the rather convolutedely-worded ‘International Singing Competition for Baroque Opera: Pietro Antonio Cesti’ took place during the last few days of the Innsbruck Festival of Early Music, with preliminary rounds on 21-23 August and the final on 25 August. A total of 67 singers from 26 countries entered for the competition, a considerable reduction from last year’s entry of 97 singers from 32 countries. They have to fund their own travel and accommodation during the competition, so this is a very big investment for young singers, with monetary prizes only going to four of them. As well as the prizes (1st 2nd and 3rd prizes of €4,000, €3,000 & €2,000, together with an audience prize of €1,000), there is the opportunity to appear in next year’s BarockOper:Jung production of Pietro Antonio Cesti’s Le nozze il Sognio by as part of the 2016 Innsbruck Festival of Early Music. There is also the possibility of being selected to appear in other music festivals, many connected to members of the jury, most of whom represent opera venues.

I was able to see some of the first round participants and all but two of the 26 semi-finalists, an unannounced earlier start to the semi-final meaning that I missed the first two competitors, both of whom were selected for the final, one gaining the 2nd prize. I had to leave Innsbruck before the final, but it is available to watch on line via this link https://www.youtube.com/watch?t=1&v=S32Qgs-Tyk0. The standard of singing overall was good, with more singers of a higher standard than in previous years. However there still remain a couple of issues that seem to crop up every year. This is very obviously a competition for singing Baroque Opera, so competitors presumably need to portray some ability at acting, rather than just standing and singing – which rather a lot of them did.  Another inevitable issue is the use of vocal techniques better suited (if at all) to a much later repertoire, vibrato being just one aspect of that category. This is as much a problem of the training of young singers as of the singers themselves. And many directors still seem to employ singers with techniques that are totally unsuitable for the chosen ‘early music’ repertoire, so all might not be lost for them. But for a specific Baroque opera competition, I would have hoped that due account would be taken of the suitability of a voice for music of that period – however, I am not sure whether it is.

As is always the case, there were several singers that I really liked, but who didn’t get anywhere. As I only saw a few of the 1st round singers, it is perhaps unfair to single any of them out – but I will. I was impressed with the American soprano Leigh Nel’s (neé Michelow) very obvious willingness and ability to act, which she combined with an agile and articulate voice with the merest hint of vibrato. The German bass Felix Rathgeber sang Seneca’s Ecco la sconsolata donna from Monteverdi’s Poppea, reflecting a naturally stable voice with a good use of gesture. He was also one of the few competitors who took the trouble to thank the harpsichord accompanists, as did the Swiss mezzo Geneviève Tschumim who also impressed me with her use of gesture and attractive voice in her Handel aria from Xerxes – Amor tiranno amor.

During the 2nd round semi-final there were four singers who I liked but who didn’t get into the final – and two who didn’t impress me at all who did. The former category were Spanish tenor Francisco Fernandez-Rueda demonstrated a wide range of vocal timbres and added appropriate ornaments to the da capo arias. Polish countertenor Kacper Szelazek also provided some excellent da capo elaborations as well as expressing the emotions of the music well. The Dutch countertenor Oscar Verhaar had a particularly pure and clean sounding voice, and articulated his runs well. The British countertenor Benjamin Williamson controlled the breaks in his register well, and demonstrated his ability of gesture and movement.

Barbara Zamek demonstrated a good stage manner, use of gesture, and an expressive voice. The unannounced earlier start to the semi-final meant that I didn’t get a chance to hear the Israeli/Belgian mezzo Anat Czarny or Ukrainian contertenor Konstantin Derri. 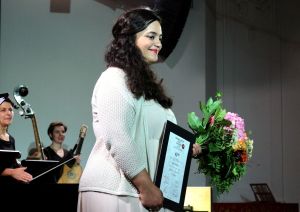 The eventual winner was the French alto Anthea Pichanick (pictured left), second prize going to Ukrainian contertenor Konstantin Derri and 3rd prize to Italian soprano Alice Rossi. The audience award went to Arianna Venditelli, a soprano from Italy. Special awards of appearances at various festivals went to Anthea Pichanick and bass-baritone Matteo Loi. The final concert included pieces from an almost forgotten opera by the Innsbruck court musician Pietro Antonio Cesti, whose comic opera Le nozze in sogno, will be performed in Innsbruck next year as the 2016 BarockOper:Jung. Next year’s competitors will have to perform arias from Reinhard Keiser’s Octavia, which will then be performed as the 2017 BarockOper:Jung.

One thought on “Innsbruck: 2015 Cesti Singing Competition for Baroque Opera”