The Tallis Scholars were founded in 1973 in Oxford and gave their first London concert in St John’s, Smith Square three years later. They returned there for their 2000th concert with an adventurous programme centred on the extraordinary, but rarely performed Missa Cantate by the enigmatic John Sheppard. This is a curious work, although the title ‘Sing’ is pretty clear, as is its festal nature. It probably dates from the mid-1550s during Queen Mary’s reign. As was usual in England in masses of this kind, the Kyrie was not set (something that escaped the attention of the programme compiler who listed a Kyrie in the text translations). To make up for that, John Taverner’s ‘Leroy’ Kyrie opened the concert, its slowly three lower unfolding melismatic lines supporting a treble cantus that might have been composed by Henry IV or V – hence the Le Roy name. This revealed what became one of the highlights of the evening: the outstanding singing by the four sopranos whose clear, unaffected and focussed voices were a constant delight.

Sheppard’s Cantate Mass is in six-parts, lasts about 30 minutes,  and features typically English Renaissance choral writing techniques of first contrasting three or four voice high and low choirs before bringing them together, extended melismas, and almost playful tossing around of little motifs. One of the nicest examples of the latter comes on the word Patris at the end of the Domine Deus section of the Gloria with a four-note fanfare-like motif pops up in five of the six voices. There are several lovely moments, one being a tiny ornament (reflecting keyboard technique of the period) in one of the tenor lines. Rather unusually for English audiences, we had applause after each of the four mass settings.

The second half opened with a piece written for the Tallis Scholars’ 40th anniversary in 2013 by Gabriel Jackson, the featured composer of the 2015 London International A Cappella Choir Competition of which this concert was the opening event – and, incidentally, which provided a very much younger audience than is usual as the competitor choirs came to see what they could hope to achieve.  Gabriel Jackson’s Ave Dei Patris filia is a fascinating combination of styles, including Gothic hocketed rhythms, a Renaissance polyphonic structure and Baroque ornaments wrapped up in a technically advanced piece. It was interesting to hear that the perfect intonation of the four high close-harmony sopranos produced sub-harmonics during their Ave plena gracia verse, something usually only experienced with recorder consorts. They finished with familiar pieces by William Byrd, concluding with his expansive Tribue Domine, one of the choir’s favourite and an encore of Tallis. And, of course, a book and CD plug and some reminiscences from Peter Phillips, one the best being the revelation that most of the choir for their very first concert arrived from a formal dinner at another Oxford College late, out of breath and giggling. Further reminiscences and cake followed in the crypt.

I have reviewed the Tallis 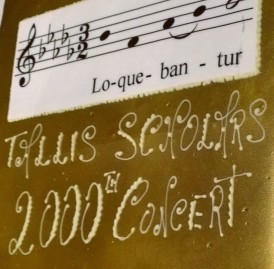 Scholars many times over the years or more, and have written before about their changing sound. Groups like this obviously evolve over time, but their basic sound and performing style have managed to remain pretty constant, regardless of the repertoire. Interestingly, this was something that Peter Phillips highlighted as a proud boast in a programme, although it could also be interpreted at a comment on the authenticity of an otherwise specialist choir. What has changed over time is their blend. In the past there was the tendency for one or two voices to dominate, usually through a distinctive tone timbre and for a rather forced sound, particularly when singing in a large acoustic. That has gone, perhaps helped by the extraordinary talents of the younger generation that have been working their way into long established groups like this – and 2000 concerts worth of experience. They now produced a superb blend of consort sound, whilst still allowing individual voices to be recognised. It is also noticeable that Peter Phillip’s rather erratic conducting style has mellowed somewhat, not least in being rather less jerky and more relaxed.

The concert was broadcast live on BBC Radio 3 and is available via the internet for 30 days after first broadcast at http://www.bbc.co.uk/programmes/b06c9pd6.