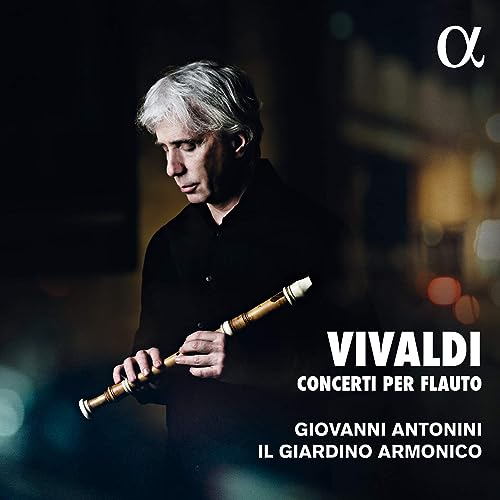 Giovanni Antonini is both the recorder soloist and the director of his own group, Il giardino armonico. With many Vivaldi recordings under their belt, this CD selects six Concertos for recorder and contrasts those with an arrangement of a movement from the Nisi Dominus for chalumeau, a forerunner of the clarinet.

Stay close to your playing device when you first start this recording – it is set at a very high volume setting in comparison with other CDs. That might also be a warning as to the nature of the performance. This is high drama, high energy stuff, presented with considerable punch from Giovanni Antonini and Il giardino armonico.

The recorder playing is frequently frenetic and breathless – sometimes almost literally so. While I can understand that such shows of ‘if you’ve got it, flaunt it’ virtuosity can appeal to some listeners, I do wonder if the cost to the music itself is worthwhile. Of course, Antonini is not the only recorder player to focus on astonishing feats of finger dexterity. I guess this is something to do with it being an instrument than most people have at least had a go at, even if only briefly at the age of about 8, so are more likely to appreciate the displays of technical brilliance of professional players.

The recordings come from 2011 and 2017. It is not clear when each concerto was recorded although, judging from the list of players, it looks as though RVs 433, 441, 443 and 444 were recorded in one session, and RVs 442 and 445 (the last two concertos on the CD) in another. The two sets of recording groups have different violinists (Enrico Onofri in the first group, Stefano Barneschi in the other two), violists and cellists. The four-concerto group also has a harpist.

All were recorded in the same space and I couldn’t detect any difference in the tracks. Perhaps inevitably, given the nature of the recording, the aural focus is concentrated on the solo recorder, with the light orchestral accompaniment very much in the background, Given the natural projection of the very high-pitched recorder, I wonder if a more balanced approach to comparative recording levels might have reflected better the structure of the music.