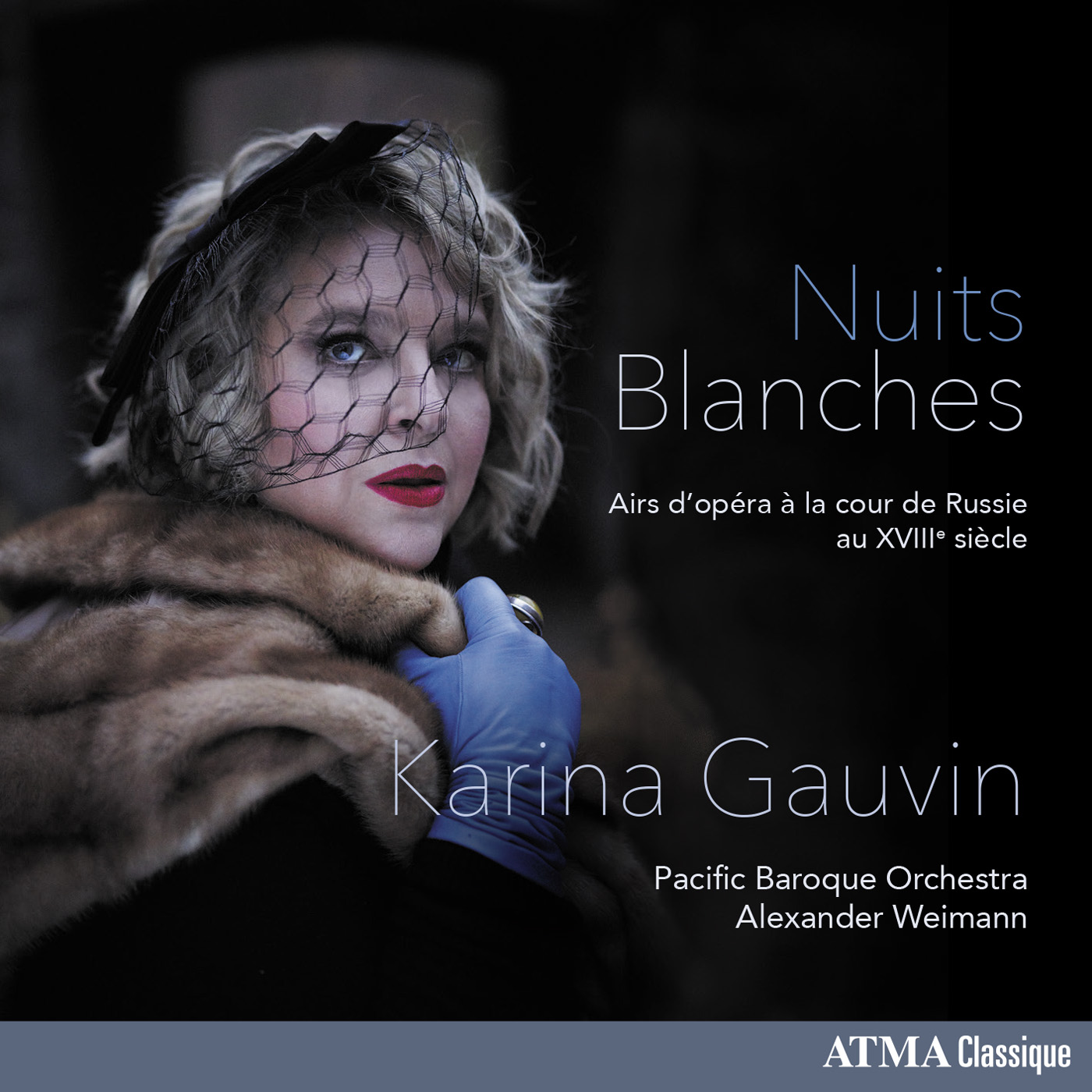 This recording (Nuits Blanches = White Nights) explores, in theory, music from the Russian Court in the 18th-century. The “in theory” bit is because there is very little music on the CD that was directly associated with the Russian Court, although there is certainly evidence of music that would have fitted the title rather better. With the exception of Christoph Willibald Gluck (whose presence on this disc is the weakest link to the title), the composers are unlikely to be known to anyone but the most dedicated follower of Russian musical fashion.

Apart from Gluck, the main composers represented are the Ukrainian-born Dimitri Stepanovitch Bortnianski (1751-1825) and Maxime Sozontovitch Berezovski (1745-1777). Bortnianski is known, if at all, for his church music, composed while he was director of the Imperial Chapel Choir. Like Berezovski, his musical influence and training were in Italy, where they both studied. Apart from the very Italian opening Air d’Elvire: Ne me parlez point from the opéra comique Le Faucon (The Falcon), the musical examples from both composers date from their time in Italy, rather than from Moscow. The Ouverture from Le Faucon later introduces three examples from Bortnianski’s drama per musica about Hercules, Alcide, first performed in Venice in 1778.

Mi sorprende sees Alcide (Hercules) at the crossroads, struggling to choose between the difficult route of virtue and the easy road of pleasure. In Dei clementi he gives thanks to whoever helped him choose the correct path.

Berezovski studied with Padre Martini in Bologna. His opera Demofoonte was performed during the carnival of 1773. Two of the four surviving arias are included here, the main one being the concluding Misero pargoletto, sung by the Prince Timante of Thrace as he hears that his young son is the result of an incestuous relationship.

The Gluck extracts are from Armide (1777) and include the extended Enfin, il est en mon puissance and the opera’s finale Le perfide Renaud me fuit. It is not entirely clear why this is included. As far as I am aware, Gluck had no connection with the Imperial Court, or indeed, Russia. The notes only refer to the fact that Berlioz introduced it to Russia, although that was well after the death of its composer. Anyway, it gives the CD programme one name that will be known.

There are brief orchestral pieces by Domenico Dall’Oglio (c1700-1764), the first movement of his Sinfonia Cossaca, and Evstignei Ipatievitch Fomine (1761-1800), the Ouverture to his 1787 Les Cochers au relais.

The Canadian soprano Karina Gauvin sings with a powerful operatic voice, relishing the more dramatic moments of the programme. She is well supported by the Vancouver-based Pacific Baroque Orchestra, directed by Alexander Weimann. The liner notes mention that Bach had an unrealised ambition to become a musician at the Imperial Russian Court. News to me, but interesting, if true.