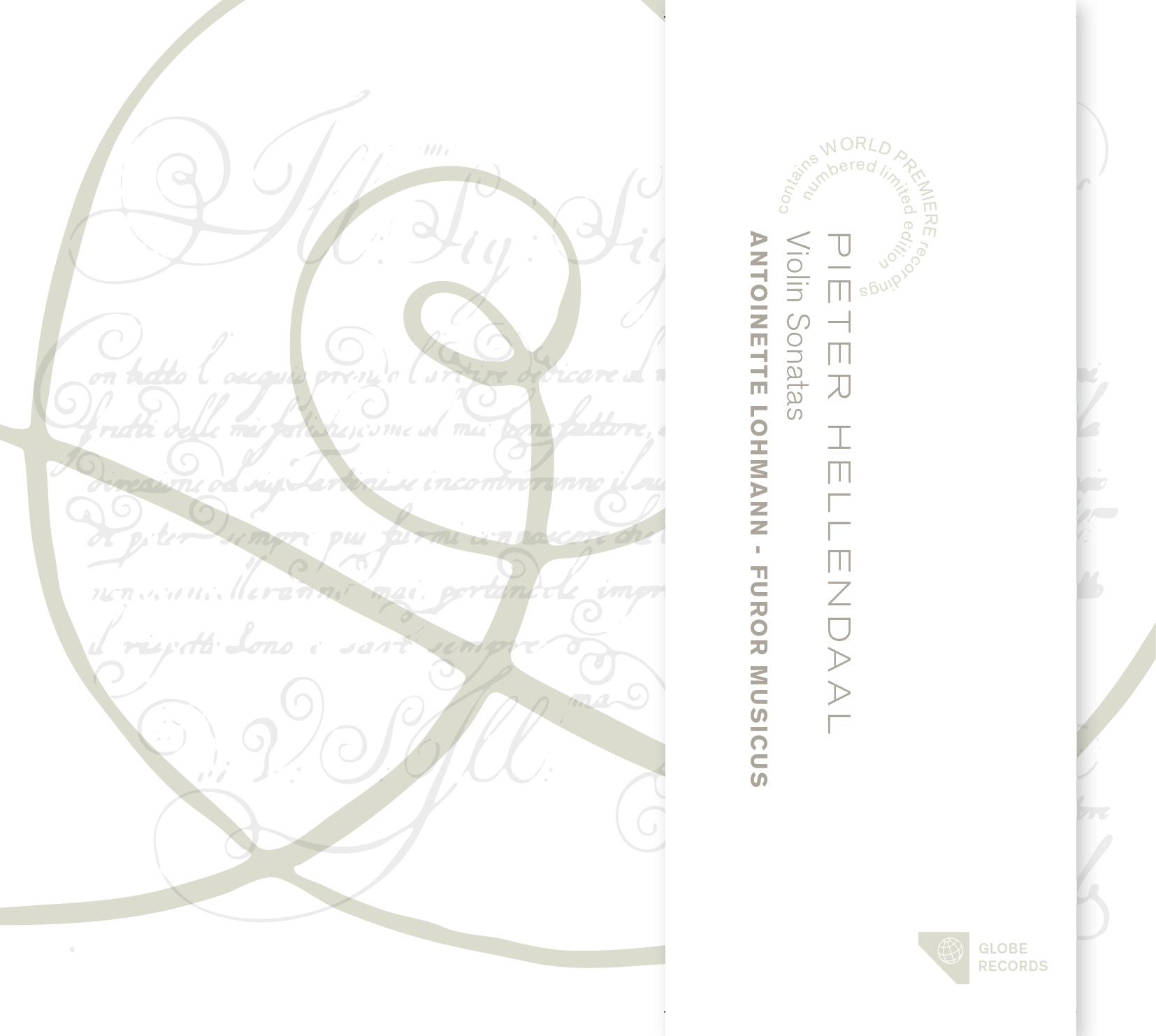 In what is billed as a “hand-numbered limited edition” on the paper slip on the off-white card CD case (which, as you can see above, doesn’t show up too well against a white background), violinist Antoinette Lohmann and Furor Musicus offer world premiere recordings of Violin Sonatas by Pieter Hellendaal (1721-1799). He was an Anglo-Dutch composer, organist and violinist, sometimes referred to as  “The Elder”, to differentiate him from his musician son. He was born in Rotterdam and, aged 30, moved to England where he lived for the rest of his 78-year life.

The composer and his music are not well known, so Antoinette Lohmann’s extended programme essay on his life is an important contribution in itself. It is in English, but the original and longer Dutch version can be accessed online. He led an interesting and versatile life, perhaps reflecting the life of a musician slightly below the top ranks of well-appointed, and now well-known composers of his time. His father was a pastry maker, changing career to a candlemaker when he moved to Utrecht when Pieter was ten. Intriguingly, the following year, while he was still 10, Pieter became organist at the important Nicolaïkerk, presumably playing the famous 1479 Peter Gerritsz organ. This is still the oldest organ in the Netherlands, but since the early 1950s has been located in the Koorkerk, Middelburg. It seems likely that his father was also an organist, as his appointed required his father to assist him.

In 1737 the family moved to Amsterdam, where he is first mentioned as a violinist. Although he may have known Locatelli in Amsterdam, he certainly studied with Tartini in Padua for several years. His father was brutally murdered in 1742, and Pieter is recorded as having performed several concerts in Amsterdam in 1743. Between 1749 and 1752 he studied at Leiden University. Although failing to find any posts as an organist, he continued to give concerts. But, in 1751, he decided to move to England, then the world centre for music-making.

He is recorded as giving several concerts in London, including playing a violin solo between the two acts of Handel’s Acis and Galatea in 1754. Again, steady work seemed to illude him so, after trying for a job in Oxford he moved to King’s Lynn in 1760 to replaced Charles Burney, the music historian, as organist of St Margaret’s Church. A year later he was organist of Pembroke Hall Chapel, Cambridge, where he stayed for the rest of life, setting up a music publishing company.

His Violin Sonatas were published under three Opus numbers, 1, 2 and 4 sometime between 1758 and 1777. There are also 11, probably later, Sonatas in manuscript form now in the Fitzwilliam Museum. The latter pieces are more technically complex than the Sonatas with Opus numbers but the scores are full of scrawled amendments, deletions and marginal notes.

The pieces are very much of their time, in the transitional period between the Baroque and Classical eras, but veering strongly back to the former style. Not surprisingly they do not reach the musical heights of Corelli, Handel or some of the better known London based musicians of the time, but they are musically attractive and inventive.

Antoinette Lohmann plays with a considerable sense of style, combining delicacy and sensitivity with elements of verve, noticeably in the Pastorale which completes the Opus 4/3 Sonata, where she creates her own sound world.

Commendably, for two of the Sonatas, Furor Musicus use a ‘proper’ organ (the c1700 Peter Weidtman der Ältere instrument in the Lutherse Kerk, Hilversum, more information here) rather than the usual weedy little continuo organ. The rest have harpsichord continuo. The recording focus is rather distant in comparison to many, but you soon get used to that. The balance between the violin and the accompanying instruments of Furor Musicus (Jorn Boysen, harpsichord & organ, Maria Sánchez Ramirez, cello, Jan Hollestelle, violone, Harjo Neutkens, lute, Tonia Strauch, Terzgeige (violino piccolo) Hinnerck Fedderssen, hurdy-gurdy) is good. The hurdy-gurdy is used in the final Hornpipe, where everybody lets their musical hair down.

Considering the thought that has gone into the preparation and presentation of this CD, it is shame that the black and white photographs are so poor, particularly the 1767 etching which includes Hellendaal himself in Cambridge. Two other photos are taken against the light from a window and are therefore hopelessly in shadow. I also couldn’t work out the two musical examples, supposedly of Sonata X from the Fitzwilliam manuscript, which do not reflect the music played for the two movements illustrated.