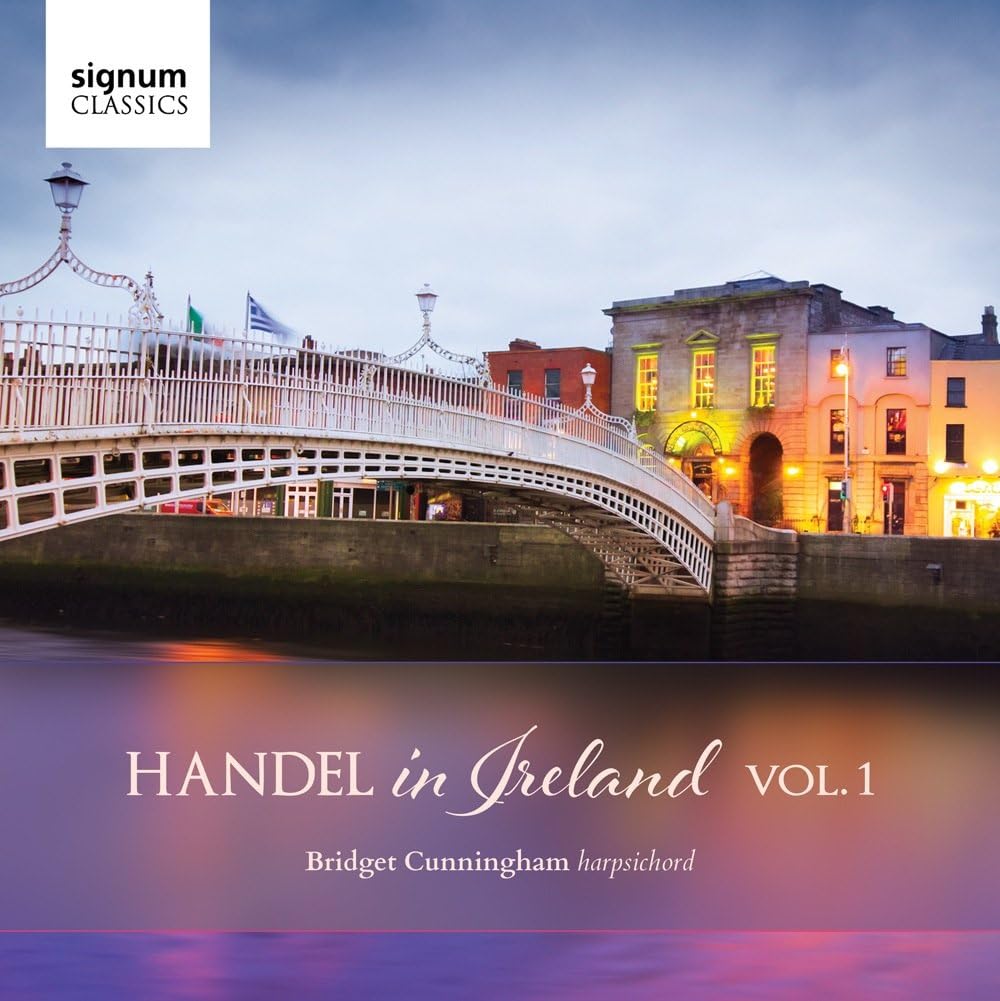 This is a rather delayed review of a CD released in 2017. It is part of an ambitious series of Handel recordings from Bridget Cunningham and her London Early Opera, including Handel in Italy and Handel at Vauxhall, but this one is for solo harpsichord. This recording explores “some of the myths and mysteries surrounding Handel’s visit from London to Dublin in 1741 and reflects on the influences that Handel experienced from being in Dublin and also the inspiration he gave to others through his music and skills of improvisation at the keyboard”.

Handel’s journey to Dublin is best known for including the first performance of Messiah, in April 1742. He spent nine months there in his mid-50s, having fallen into financial troubles in London as the popularity of Italian opera declined. At the time, Dublin was the second-largest city in the British Isles, with a strong musical tradition.

In her 15-page programme note, Bridget Cunningham explores in considerable detail aspects of Handel’s time in Dublin alongside many other snippets of information, all of which reads rather more like an intense undergraduate essay (without the essential references) than a note of help to a listener. There follow another 8 pages on the pieces played. The link between the music and Handel’s time in Dublin is often tenuous, and sometimes non-existent.

The CD opens with John Walsh’s keyboard version of the Sinfony to Messiah, which he published with the title Overture. Handel also performed the oratorio Esther in Dublin: its Overture is performed in a version by John Christopher Smith, Handel’s assistant. It is open to question as to whether Handel was involved in the transcription.

The six-movement Suite in g minor (HWV 432) was published by Walsh in 1720, well before the Dublin visit and with no obvious connection with that city. It is one of his ‘Great Suites’ collected together by Walsh from pieces that Handel may well have written much earlier in his career. Similarly, although there is no record of Handel’s 1717 opera Rinaldo having anything to do with his Dublin visit, two of Babell’s arrangements of arias are included. This seems to be one of the promised ‘myths’, as there were apparently unspecified “anecdotal reports” that Rinaldo was also performed in Dublin.

There are three pieces that may have a connection to Dublin, although not with Handel. One is Forest Music, a curious little piece that, according to more anecdotes, Handel composed in 1742 in Dublin. It is included, anonymously, in another Walsh volume that happens to include another Handel piece – that seems to be the only connection. The final two pieces in the programme are Irish folk melodies. The tune of Der arme Irische Junge (The poor Irish boy – the German title is not explained in the notes) is found under the name of ‘Ballet’ in a Handel manuscript in Cambridge on the same page as sketches of He was despised and rejected. It seems an odd combination of music snippets. The concluding Aileen Aroon was known to Handel and was performed in Dublin – in this piece Cunningham double-tracks harpsichord and an Irish harp.

The remaining pieces by other composers also have tenuous links with Dublin or Handel. The little Vivement in d minor by Francesco Geminiani is included to reflect “the concert and folk worlds which were both prominent musical traditions working side by side in Ireland.” A suite by Thomas Roseingrave is included, seemingly on the basis that he retired to Ireland in the 1750s after serving as organist of Handel’s church of St George’s Church, Hanover Square in London. I’ve not heard of Charles Thomas Carter before. He was born in Dublin and was six years old at the time of Handel’s visit. His Sonatina in E flat was published in the late 1779s, well after Handel’s death.

Bridget Cunningham’s plays on two French harpsichords, copies of a Ruckers with a Blanchet ravalement, and an original Blanchet. Which instrument is used when is not indicated, not why those instruments were chosen. Both are tuned in what is described as a “shifted Vallotti temperament” – an interesting choice, given that it was not published until well after Handel’s death and that there is evidence that meantone temperament was relatively normal during Handel’s life. There were two recording venues – the Royal College of Music and St Augustine’s Church.

Having said all that, it would be lovely to be able to praise the performance but, sadly, I can’t. The playing tends towards safety in terms of speeds and individual interpretation. At times it sounds rather heavy-handed, and there is little subtlety in the interpretation, articulation, or texture. Bridget Cunningham has been very enterprising in her London Early Opera venture, and I have praised several of their CDs. But, unfortunately this proves to be an exception.