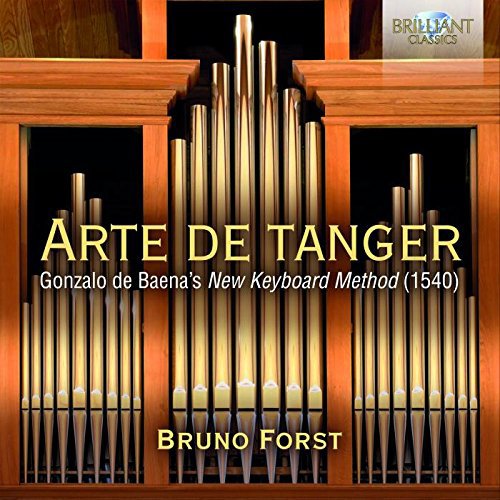 Gonzalo de Baena (c1480-1540+) was a Castillian musician in the service of the King of Portugal. His Arte novamente inventada pera aprender a tãger (New method for learning to play) was printed under royal charter, but was never published. It was the first book of keyboard music printed on the Iberian Peninsula. Its discovery (by Alejandro Iglesias) was announced in 1992, having been previously incorrectly catalogued and titled in Madrid’s Biblioteca del Palacio Real.

The manuscript contains 66 pieces, arranged in order of difficulty and an increasing number of voices, intended for beginners at the organ or clavichord. With few exceptions, the pieces are all reasonably accurate keyboard transcriptions of polyphonic vocal music, either motets or extracts from Masses. The composers include Flemish Masters such as Ockeghem, Obrecht, Desprez, Compère, Brunel and Agricola whose music Baena had studied, together with some of his contemporaries in Spain (including Morales, Peñalosa, Badajoz, Anchieta and Escobar) and some of his own and his son António’s music.

This recording includes 45 pieces from the collection, recorded on two organs. The first CD, featuring Iberian composers, uses the 1658 Joseph de Sesma organ in the Church of Santa Ana, Brea de Aragón. The 1658 organ has only one 8′ stop, the en chamade Dulzaina reed, which certainly makes its presence felt, as heard in the opening track. The other seven flue stops are from 4′ upwards in pitch. It makes a forthright sound, it meantone temperament giving a satisfying smoothness to cadences.

CD2 includes the Flemish composers, played on the 2007 Gerhard Grenzing organ in the Church of San José, Navalcarnero. it is modelled on 17th-century Spanish organs, which were influenced by Flemish, French and Italian organ builders. The Grenzing organ is a very sophisticated and beautifully voiced instrument with a divided keyboard, split semitones throughout and a 2/7-comma (Zarlino) meantone temperament. As well as 8′ Flautado and Violón, there is an internal 8′ Trumpeta.

The score is in a curious letter-based notation with barely legible indications of pitch and rhythm. According to Baena’s preface, the student was expected to cut out letters and stick them to his own keyboard.

Bruno Forst, who edited and published a modern edition, in 2012, plays from the original notation. His sense of touch and articulation is impressive and helps to bring life to the music. By their very nature, several of the pieces are relatively simple and occasionally austere, although Bruno Forst’s thoughtfully applied ornamentation, based largely on the treatise of Bermuda, adds considerably to the musical interest. Individual tracks range from a mere 46 seconds to a massive 9’08, but most are around 2/3 minutes long, albeit often in sections.

The detailed notes (in English & Spanish) includes specifications for the two organs. Registrations for each track are available on a pdf file by clicking the ‘Download booklet’ link here.