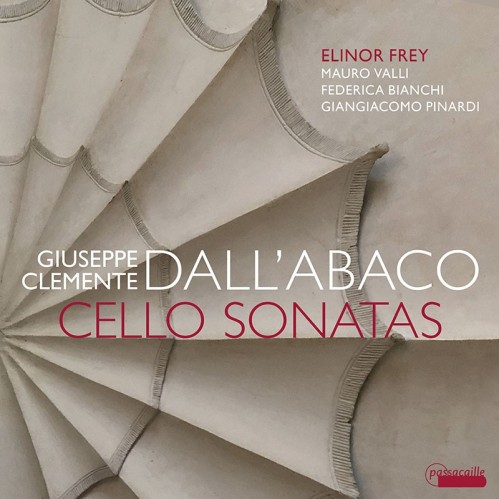 Giuseppe Clemente Dall’Abaco (1709 – 1805) was a cellist and composer with Italian descent. His early musical training was with his father, Evaristo Felice Dall’Abaco, Kapellmeister to the Bavarian Court, who at the time of Giuseppe’s birth was exiled in Brussels during the War of the Spanish Succession. Giuseppe later travelled widely, working in Bonn, London, York, Paris, Verona, Venice, Vienna, and Munich. During his London visit in 1736-37, Charles Burney wrote that he “brought the violoncello into favour, and made us nice judges of that instrument”. Although his solo cellos pieces have been known for some time, this is the first recording of any of his 35 Cello Sonatas in their original form.

There has been confusion about a number of these Sonatas, with some of the movements blatantly pinched by other composers, and some attributed to other composers, notably Berteau and Sammartini. Both were once thought to be the composer of the Sonata in G (ABV 19) albeit in altered form. Elinor Frey and her companions here perform the original version for the first time.

The five chosen Sonatas give a good representation of Dall’Abaco’s style. It is believed that they were written over a period of some 30 years between 1730 and 1760, and the music reflects the changing tastes of those time, with the move from the Baroque to the Galant. It also reflects the increasing virtuosity of cello players, freed from their Baroque role as generally continuo players. The slow movements are particularly attractive.

The last two movements of the opening Sonata in D Minor (ABV 35) seem to hark back to earlier times, They are entitled A modo di viola da gamba and A modo d’arciliuto, and are delightful representations of instruments were are beginning to be out of fashion in Dall’Abaco’s time. The recording ends with the Sonata VII in C Major, the final movement of which is marked Allegro. La Zampogna, reflecting the Southern Italian twin-chantered bagpipe.

Elinor Frey plays with a sensitivity and a nice sense of the ebb and flow of the music that shows musical respect to compositions that are perhaps not the finest ever written, but are nonetheless attractive and will repay repeated listening. She is well supported by Mauro Valli (cello), Federica Bianchi (harpsichord) and Giangiacomo Pinardi (archlute).

The production from Passacaille Records is impressive, with excellent recording quality and an attractive booklet with detailed information about Dall’Abaco. Interestingly, it was recorded in the still-existing villa of the Dall’Abaco family near Verona, where he lived for the last half of his life until his death aged 95.