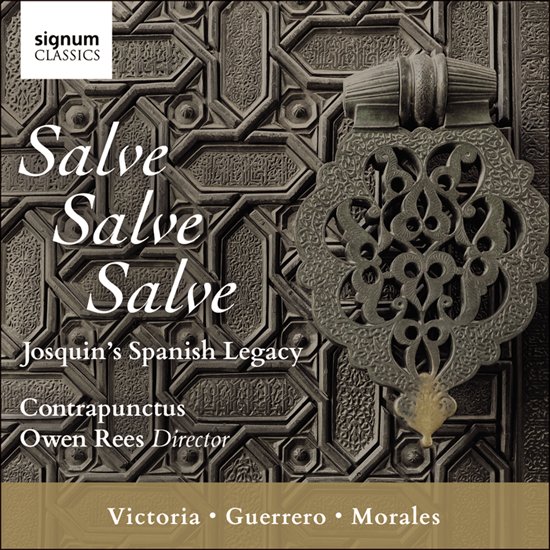 The musical focus of the disc is Victoria’s powerful six-voice Missa Gaudeamus, here performed complete. It is based on the motet Jubliate Deo omnis terra by Morales, the opening track on this CD. That was written for peace celebrations in 1538 in the presence of the Pope, and the Kings of France and Spain, the latter also being the Holy Roman Emperor. One of the six voices of Morales’s Jubliate Deo omnis repeats the ostinato phrase Gaudeamus (‘rejoice’) from the plainchant Introit to a Feast Day mass: Gaudeamus omnes in Domino (the second track on this recording). The link with Josquin is that the same phrase is used in his own Missa gaudeamus.

Another fascinating comparison comes with versions of the Salve Regina in plainchant form and in versions by Josquin and Victoria, Victoria’s version showing a clear influence of Josquin . The final piece, Guerroro’s motet, Ave virgo sanctissima, uses the same Salve regina theme

The singing us exceptional, the clarity of the vocal lines carrying through the attractive acoustic of St Michael and All Angels, Oxford, a much larger and more resonant space than The Queen’s College Chapel. Contrapunctus sing with considerable vigour and power, entirely appropriate to the celebratory nature of the music, without ever sounding forced. Owen Rees brings an impressive sensitivity to his direction that allows the music to speak with its own voice.