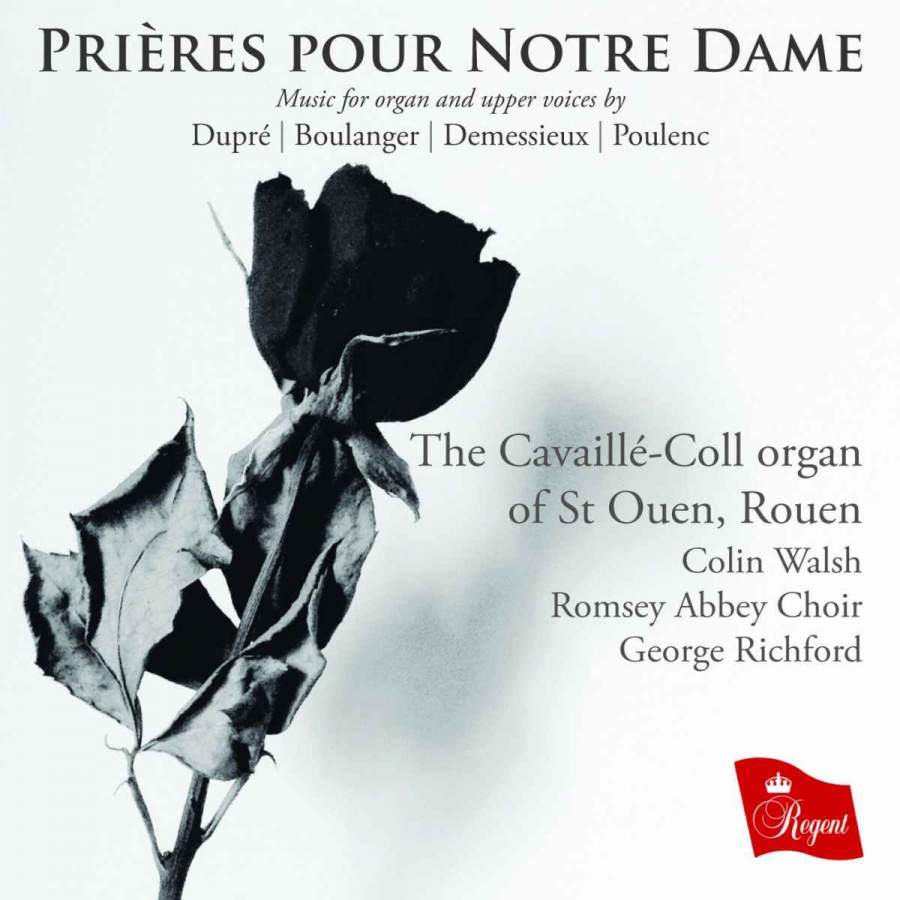 This evocative recording features music by four French composers performed on the magnificent 1890 Cavaillé-Coll organ of St Ouen, Rouen, a former Benedictine foundation – as is Romsey Abbey in Hampshire, from where the Senior girls of the Romsey Abbey Choir (aged between 16 and 19) provide an ideal contrast to the power of the organ.

Marcel Dupré (1886-1971), the famed organ composer and virtuoso performer makes up the bulk of the recording with his Op.18 15 Versets pour les Vêpres du commun des Fêtes de la Sainte-Vierge. They last about 47 minutes, the three Books divided into Psalm Antiphons with the organ providing the second Antiphon after the (here omitted) five Psalms. The hymn Ave maris stella and Magnificat are performed alternatim, the plainsong girls choir alternating with short verses from the organ.

The background story of the Dupré Vespers sequence is interesting. It originated an improvisation during a Vespers service in Notre Dame in August 1919. The British managing director of Rolls Royce was there and, when learning that it was improvised (as was, and still is, the practice in French churches) asked Dupré to write it down, offering him 1500 Francs, an English publication deal, and a performance at the Albert Hall: all of which happened. The pieces were premiered on this same St Ouen organ in 1919.  The Albert Hall performance was in December 1920 with a 600-strong choir and an audience of 9000, including the then Prince of Wales.

The organ pieces are short musical essays, generally of about 2/3 minutes. They dramatically reflect both the underlying liturgical text, the enormous range of colours and textures of the Cavaillé-Coll organ and Dupré’s often lush harmonic language. Despite being based on improvisations, the Dupré versets are masterfull little examples of French compositional style. The slowly pulsing accompaniment to an evocative solo harmonic flute stop in the third Antiphon (I am black by comely), for example, is one delightful example of Dupré’s more meditative moments.

The four Ave Maris Stella verses include a “Canon in the Fourth”, a Cromorne en Taille, a Recit de Cornet and a typically boisterous concluding French Toccata movement with a ‘big tune’ in the pedals (including the 32′ Contra Bombarde, albeit in this version, finishing quietly. The Magnificat III verse plays around with an extraordinary chromatic theme, scattering the proud in its sheer contrapuntal complexity. The following putting down of the mighty is a gently unfolding Cantilena exalting the “humble and meek”. Magnificat IV is one of those timeless meditations, marked Misterioso e Adagioissimo the Messiaen was to later make his own, while the final Gloria verse is a full-blown French Toccata lasting just over 2 minutes.

The Pie Jesu by Lili Boulanger (sister of Nadia)) brings the unison girls voices into focus above a gentle organ accompaniment. The two solo organ chorale preludes on Gregorian Chant Themes are by Jeanne Demessieux, a pupil of Dupré. The concluding Litanies à la Vierge noire by Poulenc was composed in 1936 just after the violent death of a friend, and reflects Poulenc’s ambivalence towards religion, not least in its contrast of meditatively reflective prayer and angry fff organ interjections. It was the start of his return to faith, and his interest in writing for the organ, leading to his famed Organ Concerto written the year after.

Colin Walsh’s organ playing and choice of registrations are outstanding. The little Dupré pieces are far from easy to play, and the organ is not in good condition, so this was no easy task. The Romsey Abbey choir girls come into their own in the concluding Litanies à la Vierge noire, having provided beautifully sung chant and unison singing hitherto. In many repertoire examples, I would query the presence of vibrato from some of the young women who, at this tender age, are unlikely to have been able to develop the ability to control it. But with this repertoire, it just makes them sound more French.

The texts of the sung verses and pieces are given, as well as the organ specification, but not the registrations of the organ pieces. The organ score is available on-line, so the published registration suggestions can be seen. The acoustic is, not surprisingly in one of France largest churches, generous and, along with the girls’ voices and the organ, is very well captured in this recording. Make sure that the opening track of the girls’ plainchant is not too loud – the organ comes crashing in at full volume in is majestic processional-like first Antiphon, reflecting the King sitting at his table.