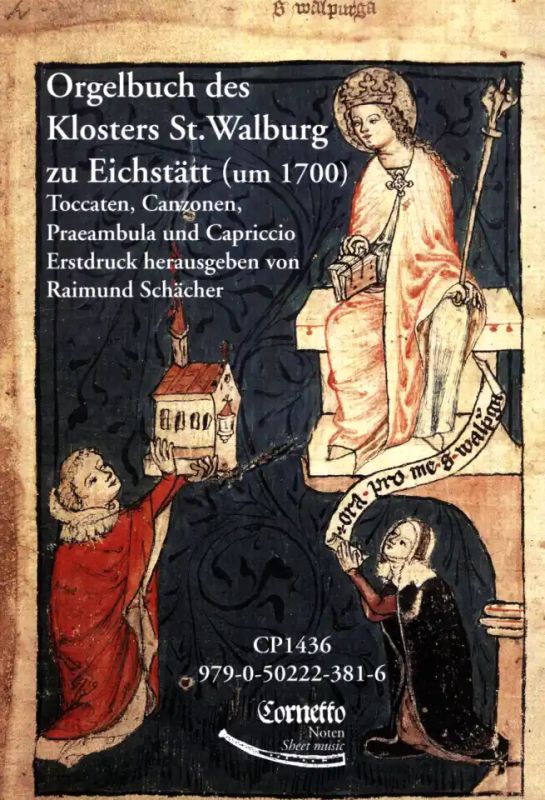 This edition is based on a manuscript (now in Regensburg) that originally belonged to Sister Maria Anna Barbara Schmaus (1653-1730), a nun who entered the Benedictine Abbey of St. Walburg Eichstätt (midway between Munich and Nuremberg) until her death to 1730. Although she was the owner, she was probably not the scribe of the organ book. The composers of the pieces are unknown. The manuscript contains 182 organ pieces on 136 pages and was clearly intended for liturgical purposes in the Abbey. This edition includes 34 of the pieces, all short (one lasting just 13 bars), and of varying quality.

Most of the pieces are in the broadly Italianate style of southern Germany, some showing similarities to pieces by Pachelbel and Kerll, for example, the Toccata 3tii toni and Toccata quinti toni with their running 3rds and 6ths over a pedal point. One of the best pieces is the opening Toccatta 8vi toni, requiring nimble fingers. One of the longest pieces is the first of two pieces with the title Toccata 6ti toni, running to four sides. The second Toccata 6ti toni has one of the rare textural errors, in this case on the first chord, but it is pretty obvious to performers. Dance-like pieces include the lively Cappriccio authore ignoto quinti toni with its syncopated rhythms.

Although unlikely to form the basis for a recital programme, these pieces give an interesting insight into the music of a South German Abbey in the years around 1700.  The introduction is in German only. There are no critical comments or other editorial indications. A companion CD is planned at some stage.