London Early Opera’s programme explored the ‘Costly Canaries’ gathered by Handel from around Europe during the early years of the Royal Academy of Music, the aristocratic corporation founded 300 years ago, in 1719. Handel was ‘Master of the Orchestra’ with responsibility for composing his own works to Italian libretti, adopting mostly Italian operas for performance in London, and engaging singers and players, usually from Italy. Enormous fees were paid to many of these singers, leading to Mainwaring description of them as ‘costly canaries’. The three singers that Handel procured highlighted in this concert were Margherita Durastanti, Anastasia Robinson (an Italian born and trained, but English singer) and, later, Anna Maria Strada del Pò. They joined others such as Francesca Cuzzoni and Faustina Bordoni, the two singers whose fabricated rivalry was whipped up by Academy audiences. These imported stars were paid extraordinary amounts of money, leading to the ultimate collapse of the Academy in 1729.

In this concert, three singers represented the three canaries, with Hannah Poulsom as Margherita Durastanti, Marie Elliott as Anastasia Robinson, and Anna Gorbachyova as the late arrival, Anna Maria Strada del Pò. The programme moved in chronological order from the early years of the Academy through to the mid-1730s post-Acadamy institutions of Covent Garden and the Second Academy of Music (set up in 1728) and the move away from Italian opera towards oratorio.

After an opening Overture from Agrippina, dating from Handel’s time in Venice in 1709, the first half focused on Durastanti and Robinson, with arias from Handel’s Radamisto, Muzio Scevola, Floridante, Ottone, and Flavio together with pieces by Vivaldi, Porta and Bononcini. The second half saw the departure of Anastasia Robinson after a period of illness and a possible breakdown and her (then secret) marriage to the Earl of Peterborough. It saw the arrival of Anna Maria Strada del Pò who joined the Second Academy of Music as their prima donna. She was the only singer that didn’t defect from Handel to the new Opera of the Nobility in 1733, and sang in several of Handel’s oratorios as the popularity of Italian opera declined.

This was an ambitiously planned and presented programme, but, as the 10 o’clock St George’s bell tolled with two more pieces to go, it did start to overstay its welcome. The performance was fine (with some notable contributions from Joel Raymond, oboe), although I would personally have preferred singers with far greater control over vibrato, particularly as it would have allowed them to more effectively explore (or at least try) some Baroque ornamentation and da capo elaborations. Durastanti and Robinson sang from music on a low music stand, but Strada held a music folder close to her face for most of the time, singing over the top of it. That said, Strado did attempt some da capa flourishes and had the better voice of the three.

By far the biggest disappointment, indeed embarrassment, of the evening was the inept narration of Lars Tharp, speaking to his own series of projected slides. That the slides and talk was full of errors was only the start of it. Tharp seemed to be randomly improvising much of what he said, and completely disrupted what surely was a well-planned coordination between the narration and the music. He spoke for about ten minutes before the orchestra had the chance to start, talking about the third piece before allowing the orchestra to play the first and second. The slides were generally out of sync with the music and stopped altogether for some time. I know that many LHF attendees read these reviews, so will mention just a few of the errors, many of which where audible spotted by the audience. Lübeck is not ‘neighbouring’ Halle, but about 400km north, and it is not spelt “Lüebeck”.  Speaking about Handel’s visit to Lübeck to hear Dietrich Buxtehude he showed the famous ‘Musical Company’ painting by Johannes Voorhout (below). but highlighted the youth with his hand cupped over his ear as Buxtehude, blacking out the rest of the painting and the actual Buxtehude – the viola da gamba player on the left, helpfully with his fingers on the notes DB. For more information about this painting, see here. 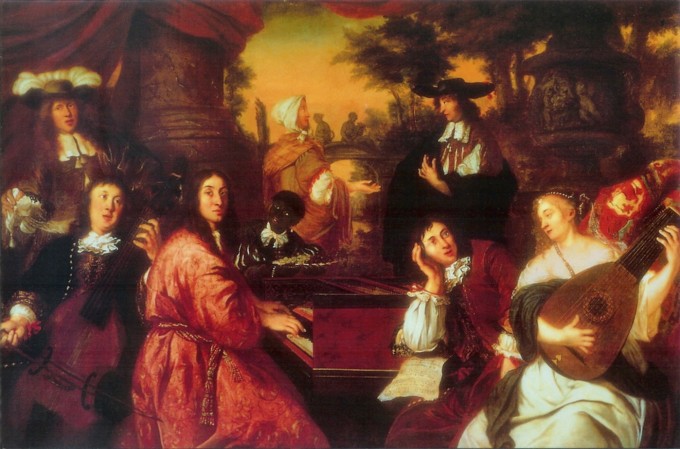 Lars Tharp also suggested that Handel got “English citizenship” rather than British; that the latest incarnation of the Royal Academy of Music main rival in London was the “Royal School of Music”; and several other idiocies not worth mentioning. This was particularly unfortunate as it cast a damper on the whole proceedings, which were very well-intentioned, well-thought-out, and generally well-performed. Ending the evening with the Hallelujah Chorus might have been a good idea if you had more than one soprano and two mezzos, but turning it into a very hesitant audience sing-along didn’t really work.

I understand that this programme might find its way onto a future Early Opera Company CD release, with different singers. I have praised their releases in the past, so look forward to this release.