As part of their 25th-anniversary celebrations (which also included the release of this excellent CD), The English Cornett & Sackbut Ensemble (ECSE) joined with the National Centre for Early Music (NCEM) in the 2018 NCEM Young Composers Award. UK composers aged 25 and under were invited to compose a piece to be performed by The English Cornett & Sackbut Ensemble. Composers were”encouraged to “look to Venice for inspiration, and to treat the cornetts and sackbuts as ‘wordless voices’, closer in spirit to a vocal ensemble than to a modern brass ensemble“. They were offered this brief outline of Venetian art and writing. During the final of the award in May, the ECSE performed the six shortlisted pieces and helped to select two prizewinners, one for those 18 and under, and one for 19 to 25 year-olds. All the finalist’s pieces can be heard on the NCEM Young Composers Award website here. The two winning pieces were performed during this Turner Sims concert: ‘Bridge of Sighs’ by Lilly Vadaneaux (18 years and under) and ‘Isole’ by Andrew Blair (19-25 years). Extracts from the concert will be broadcast on BBC Radio 3’s Early Music Show at 2pm on Sunday 18 November and will be available for a few weeks after that.

The two young composer pieces were set in the context of the ECSE’s programme ‘Echoes of Venice’, reflecting the rich musical life of Venice during the decades around 1600, with a focus on music by Giovanni Gabrieli, nephew of Andrea and organist of San Marco and the Scuola Grande di San Rocco in Venice.  Six of his pieces were performed, including two organ solos played by Robin Bigwood (along with others by Merulo and Andrea Gabrieli) on the 2009 Italian-style Walter Chinaglia chest organ, now resident in the UK. This organ also proved to be particularly effective in accompanying the cornetts and sackbuts, its breathing and gently vocal tone adding a distinctively Italian timbre, most notably in Cipriano de Rore’s Ancor che col partire with added cornett diminutions by Bovicelli, where it balanced beautifully with the distinctive sound of Gawain Glenton’s mute cornett.

Most of the music was composed during the transition between the Renaissance and Baroque musical eras, the polyphonic style of the former contrasting with the more melodic style of the latter. Dario Castello was an example of a composer on the cusp with his Sonata 12 a 3, a multi-sectional piece in the influential stylus phantasticus form of the early Baroque that made for a mini-opera in its own right. Some of the music was borrowed from other instruments, for example, G Gabrieli’s Sonata per tre violini o simili, the ‘simili‘ in this case being the rich solemnity of four sackbuts. An instrumental interloper amongst the cornetts and sackbuts was Emily White moving from sackbut to violin for a couple of pieces, a reminder perhaps that this period saw the start of the move away from the cornett towards the violin as the principal solo treble instrument. Emily White also gave a beautifully expressive performance of Grandi’s O quam tu pulchra on sackbut, balancing the earlier impressive dexterity from Andrea Inghisciano in his flamboyant version of Ganassi’s cornett diminutions on Willaert’s La Rose.

The first of the two new compositions was ‘Bridge of Sighs’ by Lilly Vadaneaux. Now 16, Lilly Vadaneaux won the same award in 2013 at the age of just 11, the youngest ever entrant to the competition. Her impressive piece was based on her perception of the feelings of prisoners as they crossed the famous bridge. Her intense and closely wrought harmonies and her use of descending motifs perfectly reflected the melancholy and despair of the prisoners, only occasionally balanced by brief lighter moments as the harmonies phased from minor to an occasional major.

Andrew Blair’s reflective ‘Isole’, was built around long-held notes from the bass sackbut, surrounded by flourishes from the other two sackbuts and two cornetts. Making inventive use of Baroque-style ornaments, he also made use of close harmonies, here enlightened by the occasional use of the purer open intervals of a 4th and 5th. Both composers made very effective use of moments of silence in their pieces. In Andrew Blair’s case these divided a sequence of short phrases, presumably giving a clue as to the title of the piece, the Italian for ‘islands’. Both composers managed to encapsulate the distinctive sound of a cornett and sackbut ensemble in an imaginative and musically mature manner. 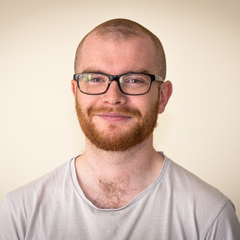