One of the most exciting music venues to hit London in recent years has been a rather unassuming Baptist church in Heath Street, Hampstead. Bowing to the inevitable, they have reduced their services to Sunday mornings, but have encouraged a wide variety of activities during the rest of the week, including lunchtime and evening concerts. In 2016  a complete weekend was devoted to the ‘Hampstead Baroque Festival’ which concluded in a Bratwurst, Beer & Bach concert given by the then newly-formed period-instrument collective Istante, ‘ensemble in residence’ at Heath Street Baptist Church. Last year, this festival morphed into the more imaginatively named Baroquestock. I reviewed the opening concert when they hosted one of the Orchestra of the Age of Enlightenment’s ‘Night Shift’ events, aimed at just the sort of younger-than-usual classical music audience that Heath Street had already been attracting. In an imaginative, albeit brave bit of programming, the concert was devoted to a performance of Schoenberg’s Verklärte Nacht, complete with ‘Schoenbergers’. My review is here, noting that the “large and enthusiastic crowd was yet another indication that adventurous musical programming and providing something a little different from the normal run of musical events can draw the crowds”. 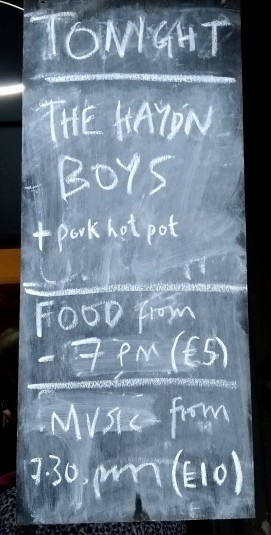 This year’s Baroquestock festival featured eight concerts under the overall title of “No man is an island”, with a subtitle of a “Festival of Earlyish Music and Homely Food”. Each concert had a related menu of food. The Hadyn Boys, as the title suggests, featured the brothers Joseph and Michael Haydn, opening with Joseph Haydn’s overture to the opera L’isola disabitata (the uninhabited island), its turbulent style a fine example of his Sturm und Drang writing, with its dramatic changes of mood. The bleakly stark opening soon gave way to livelier passages and a quiet central section. It was followed by the overture and two contrasting arias from the opera buffa Lo speziale (The Apothecary). This turned out to be one of the highlights of the evening, not least because of the singing of Emily Gray. Her first aria was a tour de force of dramatic writing and singing. As well as a very exciting singing voice (although billed as a soprano, her voice had a distinctly mezzoish colour to it), Emily Gray also demonstrated an excellent dramatic presence, drawing the audience into the world of the opera as she addressed us from the pulpit above the orchestra. The second aria was a gentler affair, revealing the more sensitive side of Emily Gray’s voice and persona. She was also a rare example of a singer who could sing a proper trill, without resorting to vibrato, of which she had commendably little.

Michael Haydn’s musical career was very different from his older brother, spending the bulk of his career in Salzburg in the Archbishop’s court. His Divertimento in G (MH518) was perhaps typical of the courtly entertainment music that he was required to provide alongside his more familiar religious compositions. Scored for Viola, Oboe, Basson, 2 Horns, and Double Bass, it featured prominent melodic lines for Elitza Bogdanova, viola, and Nicola Barbagli, oboe.

The final piece reverted back to Joseph Haydn’s and his Sinfonia No 89. Two of the four movements were arrangements of earlier pieces written for a curious instrument known as a Lire Organizzate, a type of hurdy-gurdy much loved by the King of Naples, for whom Haydn wrote several pieces. For the Sinfonia, he transferred the solo lines to the flute and oboe, with flautist Eva Caballero excelling in her contributions.

The IstanteClassical orchestra was conducted by John Andrews, whose enthusiastic direction and insight into the music added much to the musical quality of the evening. With 17 instrumentalists crammed onto a very small stage, playing conditions were far from ideal for the players, but they coped very well, albeit with one potentially tricky moment when, just before the end, the conductor swept some of the orchestral leader’s music off her music stand with an over-elaborate gesture. Naomi Burrell carried on as though nothing had happened, but I am afraid I got the giggles.  Emily Gray returned for a very welcome encore, with another aria from Lo speziale, set to a nonsense text.

The concert had attracted an impressive audience, and the atmosphere was exactly as it should be at all classical music events, relaxed, friendly and welcoming. This impression was reinforced when I chatted on the tube to three members of the audience who had been sitting just behind me. They were all first-timers, and not regular classical concert-goers. They had only spotted the Baroquestock festival events by walking past the church entrance, and commented specifically on how friendly the whole thing was.