This turned out to be a Tale of Two Churches. On my way to Hampstead for the first event of the Baroquestock Summer BBQ weekend at Heath Street Baptist Church in Hamstead, I stopped off at the church of St Sepulchre-without-Newgate in Holborn, known for many years as the Musicians’ Church, and an important venue for rehearsals and concerts for many musicians and choir. There I joined a flashmob drawing attention to the recent decision by the church (now run as a ‘plant’ of the evangelical Holy Trinity Brompton) to stop all rehearsal and concert bookings – an extraordinary decision that has caused a justifiable uproar. 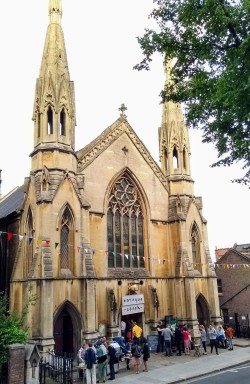 In sharp contrast to the situation in, of all places, the Musicians’ Church, Heath Street Baptist Church in Hamstead is one of many London churches that have actively embraced music and musicians, running a regular series of lunchtime concerts as well as occasional musical festivals, the latter recently under the title of Baroquestock in food-related weekend festivals. Their latest Baroquestock weekend includes concerts by Spiritato and Istante Classical, the latter including Haydn’s La Poule Symphony to the accompaniment of BBQ chicken. Their opening event was a performance of Schoenberg’s Verklärte Nacht, to the culinary accompaniment of, you’ve guessed – Schoenbergers!

This opening concert doubled as one of the Orchestra of the Age of Enlightenment’s enterprising Night Shift concerts, informal affairs aimed at a different, and usually much younger audience to their more normal, and formal, concert hall gigs. Although they have for many years extended their repertoire well beyond the realm of ‘early music’, Schoenberg’s Verklärte Nacht (‘Transfigured Night’) was a bit of a venture for them.

As a taster and prelude to the Schoenberg, the OAE sextet opened with the relative safety of the Andante from Brahms’ Opus 18/1 Sextet, a composer that Schoenberg admired. In variation form (with more than a hint of a chaconne and, later, a country dance), it reflects a lingering Baroque feel with future-looking harmonic and rhythmic adventures. Viola player Max Mandel introduced the piece, describing it as “a violist’s wet dream”, something that became apparent with the leading role that the two viola players have, joined later in the piece by some very energetic writing for the two cellists.

Before a drinks and burger break, violinist and OAE leader Matthew Truscott explained some of the many complexities of Verklärte Nacht, using a sequence of projected images of forest trees as a way of highlighting the different themes of the poem the music is based on. The poem tells the story of a couple walking in a forest in the moonlight. The woman reveals that she is pregnant by another man. After a musical interlude that can only be described as a pregnant pause, the man responds by accepting the situation completely, and the child as his own as they continue to walk.

Although the audience had a translation of the poem, the lack of lighting meant that we couldn’t see it, and there was no text on the visuals. But, however much help is given, it is not an easy work to appreciate on first hearing or to grasp the melodic and textural relevance to the text. But for those who were hearing it for the first time, the evocative nature of the projected images and the intense emotions of the music must have at least struck a chord, so to speak. Matthew Truscott also made a brave attempt at explaining the famous ‘non-existent chord’, the background to a remarkable story of the fin de siècle Viennese musical society of Schoenberg’s early years. The conservative Vienna Music Society refused to perform Verklärte Nacht on the grounds that it contained an uncategorized, and therefore, in their eyes, non-existent chord: an inverted ninth, relatively unremarkable, to 21st-century ears but well beyond their harmonic understanding.

The performance itself was exemplary, the six OAE players grasping both the emotional intensity and the occasional gentle elegance of the music. With an extraordinary kaleidoscope of musical textures and colours, the harmonically complex piece hinges around D major and minor, with harmonic shifts often to keys up or down a semitone. Playing with perfect intonation and a restrained use of finger vibrato, the clarity of the harmonies was made the more apparent. It is difficult to pick out individual performers in such an integrated and complex consort work, but the three that seemed to have the most prominent role to play were violinist and leader Matthew Truscott, violist Simone Jandl and cellist Luise Buchberger. The large and enthusiastic crowd was yet another indication that adventurous musical programming and providing something a little different from the normal run of musical events can draw the crowds.

One thought on “Schoenberg: Verklärte Nacht”