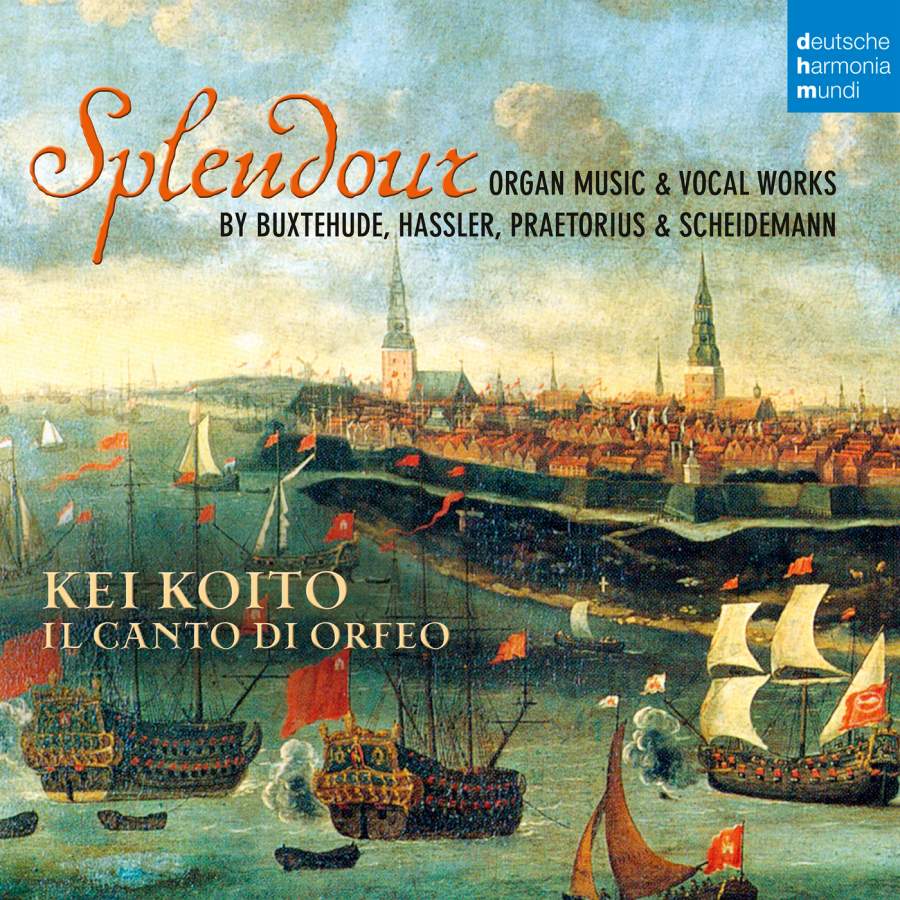 This CD features a comprehensive survey of the important 17th -century North German School of organist composers, broadly covering the generations of composers between the Hamburg Sweelinck pupils and Buxtehude. The latter’s predecessor in Lübeck, Franz Tunder, opens the programme with his ebulient Praeludium in g. The programme then broadly follows the format of a organ chorale prelude followed by the relevent chorale, sung by the Italian choir Il Canto di Orfeo, directed by Gianluca Capuano. The organ used is the well-known 1624 Hans Scherer instrument in the Stephanskirche, Tangermünde, Germany, a splendid example of the early 17th-century North German organ building tradition. It’s impressive range of colours and textures are explored to the full in Kei Koito’s choice of registrations.

It is particularly interesting to hear a couple of pieces by Hieronymus Praetorius, father of two of the Sweelinck pupils, also represented on this disc. Hieronymus Praetorius challenges the myth the Sweelinck was solely responsible for influenced the North German organ composers of the 17th-century, as he represents an existing and well-established musical tradition.

One interesting example of the craft of the North German organist is Scheidemann’s organ intabulation of Hassler’s Alleluja, laudem dicite Deo nostro, followed by the sung motet. The practice of intabulating motets goes back to the previous century or before. In Hamburg the main city churches had their own organists, but the city choir circulated round. When the choir was not there, the organist was expected to play the motet for the day, a practice the produced some wonderful pieces, of which Scheidemann’s surviving examples are amongst the most important. His following Fantasia in d (WV 83) with its little rising chromatic motif, demonstrated the meantone temperament of the organ as well as the sparkling sounds of the organ.

Many of the chorale-based organ pieces are short extracts from longer pieces so, although the spread of composers is impressively wide, it doesn’t really reflect the performing style of the time. A hymn with several sung verses, would often have a number of interspersed organ verses reflecting and musically commentating on the text of the hymn. Some of these individual verses can be as long as 15 minutes or more.

The detailed CD liner notes need the reinforcement of information found on the performer’s website. This includes registrations for the individual pieces. The CD booklet gives no information about the Italian choir Il Canto di Orfeo, although you can find a link in the website. Their contribution was recorded several months later in Milan, but they have succesfully adopted the high organ pitch of a’=486Hz and the meantone tuning. Their singing is generally very effective, although the few chanted verses seem a little hesitant. As an Italian choir specialising in Italian early music, it is no surprise that their vocal style is very different from that of North Germany, then and now.

Kei Koito’s playing is imaginative, inventive, and individual. She has an occasionally rather mannered approach to timing and articulation, and adds several added flourishes and twiddles which I am not entirely convinced would have formed part of the technique of the composers. Recording organs is not easy, and I am not sure if the right balance between detail and surrounding acoustic has been achieved here. The organ sounds a little distant and lost in the rather bloomy acoustic of the large building. It may have been recorded from where a listener would hear it, but our ears have a way of adjusting clarity in a live situation which doesn’t really transfer into recorded sound.