After the success of their 2015 production of Monteverdi’s Orfeo at the Roundhouse (reviewed here), the Royal Opera House returned with an English language version of Il ritorno d’Ulisse in patria, under the title of ‘The Return of Ulysses’. As its name suggests, the Roundhouse is a large circular building in Camden, North London, built in 1854 by a railway company as the Great Circular Engine House and used, albeit only for a few years, as a maintenance depot. It had a central turntable to switch engines into the surrounding maintenance bays. John Fulljames’s production for the Royal Opera House maintains the link with this central turntable with a doughnut-shaped staging with an outer raised ring for the singers with the orchestra in the central circle. Both rotated, the instrumentalists going very slowly clockwise (a bit slower than the hour hand of a watch) and the singers intermittently rotating anti-clockwise. on their circular stage.

The technical issues of having singers and instruments revolving in different directions were potentially enormous, not least in coordination between the singers themselves and with the instruments, but all seemed to go smoothly. Containing the acting area into a strip only around two metres wide also made for much compromise, but the use made of the rest of the Roundhouse space partly made up for that. The singers wore head mikes, the complications of amplifying moving targets reasonably well done. It resolved the inevitable issues of vocal projection with singers working in-the-round. Surtitles were projected on the circular gantry above the staging. The diction of the English translation was excellent from my rather privileged seat.

There were very few props, although a bicycle made for two made a rather nerve-wracking trip around the doughnut, and white balloons took the place of the shepherd’s sheep. Dress was of the standard issue what-can-we-find-in-the-wardrobe genre, ranging from (in one case, very appropriately-named) breastplates to refugee shabby chic. Most of the gods were cut, with only Minerva remaining (pictured below, with breastplate and Ulysses) to steer the plot along with her interventions. 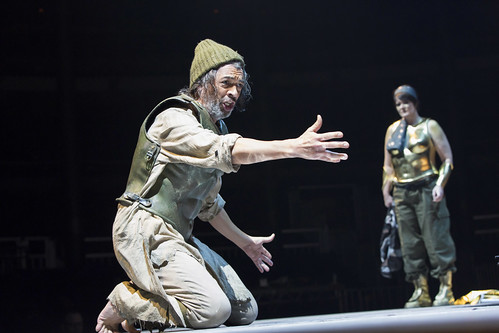 It was rather unfortunate that on the opening night, Christine Rice, as Penelope, having waited for 20 years for Ulysses to return, promptly lost her voice. She acted the role on stage while Caitlin Hulcup sang it from within the orchestra – a remarkable achievement given that had apparently only had one weekend to study the role, although she obviously sang from a score. The lip-sync coordination between the two was a bit of a struggle, and the amplification was not as mobile as for the other singers, but all those issues were more than made up for by Caitlin Hulcup’s extraordinary singing. It was entirely appropriate that she got a particularly strong round of applause at the end, and that she shared the bows with Christine Rice. But the stand-out singer of the evening was undoubtedly Roderick Williams in the title role. His beautifully expressive tone and interpretation, as well as considerable acting skills, were very evident.

Samuel Boden sang Telemachus as well as providing the rather inevitable stripped to the waist (and a curious scene in drag) eye-candy for opera-goers of that disposition. Catherine Carby was a powerful Minerva as was Francesca Chiejina as Melantho, although her strong vibrato was, I suggest, of an operatic style several centuries later than Monteverdi. Andrew Tortise was her love interest in the counterplot that shows just what Penelope has been missing for the past 20 years. Stuart Jackson provided the comedy input as a grotesquely roly-poly Irus. The three suiters were sung by a vibrato-laden countertenor Tai Oney, attractively-timbred tenor Nick Pritchard and the imposingly solid bass voice of David Shipley, all three acting well. I should declare that just as I left, a woman sitting next to me who realised that I was a reviewer, asked me to make sure I was nice about the bass.

A chorus (not in the original) was made up of the Roundhouse’s own community choir, the Royal Opera House Thurrock Community Chorus together with students from the Guildhall School of Music & Drama Vocal Studies programme. They also acted the role of refugees in a rather clunkily right-on link between the tragedy of present-day situations and the rather different situation of King Odysseus returning from the Trojan wars, albeit 20 years late and in a bit of a state. At various stages they gathered around the stage for handouts, wrapped in gold survival blankets, as well as joining in the jolity on stage (pictured below). 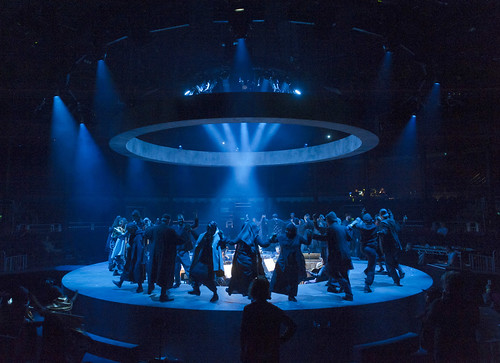 Christian Curnyn excels at directing and musically arranging pieces like this and musically this was an outstanding production thanks to his work with the singers and players.  The instrumentalists of his own Early Opera Company were on top form, particularly the richly-scored continuo group of bass violin, violone, theorbos, lirone, harps, harpsichords and organ. Of course, the score only has a single line of music for the continuo accompaniment, everything having to be improvised on the spot in response to the singers, albeit with much pre-planning including deciding which instruments to play when. Generally speaking, Curnyn left the very experienced continuo players to their own devices, only conducting when the other melodic instruments joined in or at particularly tricky tempo changes – I wish more conductors would trust their players as much as he clearly does – he is my sort of conductor.

It runs until 21 January.