One of many puzzles that leap from the pages of the Bible is the curious position of Judas Iscariot in the wider scheme of things. The synoptic gospels do not agree on his role or the story of his apparent ‘betrayal’ of Jesus: actually, a literal ‘handing-over’ or ‘delivery’ of Jesus if the word paradidomi is more correctly translated. Two of the gospels suggest that the ‘devil’ entered him, something that Jesus had already proved adept at dealing with by a bit of casting out. Why didn’t he do so on this occasion? And if, as seems likely, Jesus foresaw, and may have actively encouraged Judas’s paradidomi, then it was not an act of free will and should not be punishable, let alone seen as the ultimate betrayal for which the ‘loving and forgiving God’ has left the hapless Judas to be almost alone among the irrevocably damned, notwithstanding his clear remorse. And if preordained, why the personal condemnation of the man who fulfils the prophecy – “It would be better for that man if he had never been born”? It was one of many New Testament events that were, apparently, preordained in the Old Testament, the juggling of which has caused many problems of Christian interpretation. 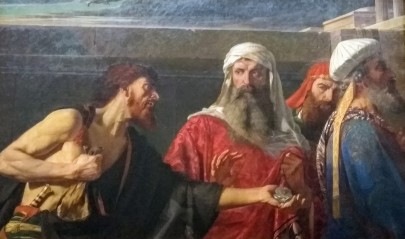 An alternative view comes from Gnostic texts which note that Judas’s role was essential for humanity’s salvation, seeing him as the “best of the apostles”. One key section of the Gnostic Gospel of Judus is used by librettist David Harsent in his text for The Judas Passion. Jesus asks the disciples to hold his gaze, but only Judas is able to do so. Jesus tells him: “You are the best of them. You will free me of the man who clothes me.” One of the mainstays of the libretto is the thought that, if Judas’s remorse is unacceptable to a ‘forgiving’ God, then there is an “incoherence in the economy of salvation”. And if he hadn’t done what Jesus seems to have encouraged him to do, where does that leave the crucifixion, the resurrection, and, indeed, the whole basis of Christian belief?

This bleak tale was given an alternative, but not unrecognisable, reading by Harsent in his libretto for Sally Beamish’s The Judas Passion, given its London premiere in St John’s, Smith Square at the start of the new Orchestra of the Age of Enlightenment season (and the start of a six-year OAE project exploring ideas of the Enlightenment). Harsent also reinforced the clearly antisemitic Biblical depiction of Judas as the money-grabbing Jew. The piece opens with a carefully pronounced and repetitive cry of Ju-das from the chorus, adding the direction from the combined figure of God/Devil (sung by two unison voices to depict the implied dual character) that “you were chosen for this”, to which Judas responds ” I do it because I must”. One oddity of the libretto is the Judas also sings the role of Pilate, for no apparent (at least to me) reason.

A key role in the piece is Mary Magdalene – sung brilliantly by Mary Bevan. Indeed, the piece could easily have been called the Mary Passion. In her soaring and complex vocal lines, she acts a narrator, commentator, and at times a character involved in the action, as in the Peter denial scene. This raises another oddity of the whole story – why does Peter, who denied Christ three times (here to the accompaniment of blasts from the horns and trumpets in Sally Beamish’s score) end up being hailed as the very foundation of the Christian church. whereas Judas, who is preordained to do the complete opposite of denying Christ, is forever condemned. Questions, questions. Mary Magdalene has the same thought. At the end, she remains alone on stage asking the obvious question, ‘If he can’t be saved, who can be saved? If he can’t be forgiven, who can be forgiven?’. Good question.

Sally Beamish clearly relished the instrumental colours of the period instruments of the OAE, to which was added modern percussion, including a purpose-made Judas Chime, intended to depict Judas’s 30 pieces of silver, rather tamely crashing to the ground at the key moment. The musical language drew on Baroque influences, notably in the technical forms of chaccone, fugue, recitative etc, but also including the more esoteric sounds of African drums and chant. I wasn’t clear when the orchestral score actually started – a rather anarchic tuning up turned imperceptively into the first, discordant, sounds of the piece.

Conductor Nicholas McGegan kept things together admirably, aided by the magnificent playing by the OAE, notably Luise Buchberger, cello, Lisa Beznosiuk, flute, and Elizabeth Kenny, archlute. Alongside Mary Bevan was American tenor Brenden Gunnell as the tortured Judas and baritone Roderick Williams as a sympathetic Jesus. The eleven singers of the choir doubled other roles, including Peter, the combined figure of God and the Devil, Ciaphas, and the two thieves.